The Future of Timekeeping Rests With Quantum Mechanics

A proposed quantum clock network would be so accurate it could detect continental shifts, potentially detecting an earthquake. 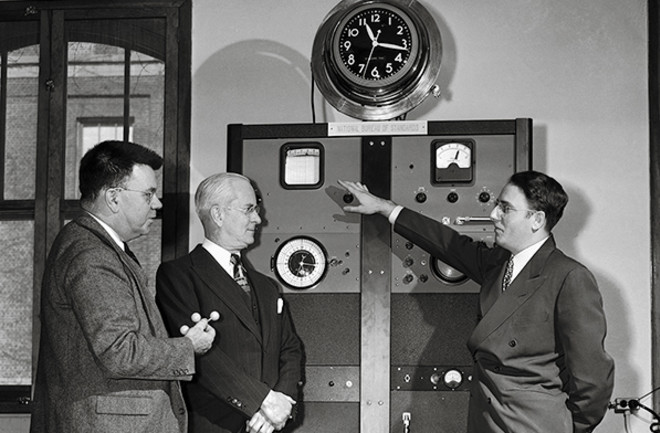 Keeping track of time is serious business. Today’s standard, the National Institute of Standards and Technology’s atomic clock, only gains or loses a second once every 300 million years. Improving on that level of precision could seem impossible, but scientists may have found a way.

In a recent study published in Nature Physics, researchers proposed the idea of a global network of atomic clocks linked by the strange science of quantum entanglement. Although it’s still theoretical, this world clock “wouldn’t have lost a second or gained a second even if it started at the beginning of the universe,” nearly 13.8 billion years ago, says Peter Komar, a physics graduate student at Harvard. If scientists one day manage to make the clock network a reality, it would be the latest in a long line of advancements in the science of timekeeping.

The sundial, which uses a vertical object like a pillar or cross that casts a shadow to indicate the time of day, is the earliest known timekeeping device, appearing around 3500 B.C. The device ultimately proved unreliable since, in addition to interference from pesky clouds and storms, the key component was in the sky only half the day.

Dutch mathematician Christiaan Huygens’ 1656 invention, the pendulum clock, measured time reliably — and at night — but it had its limitations. The clock’s mechanical parts left its accuracy at the mercy of shifting temperatures, pressures and even Earth’s gravitational pull, since pendulums swing faster at lower altitudes and at Earth’s poles.

Sailors needed reliable clocks that could tell the local land time so they could calculate longitude. Enter English carpenter John Harrison, whose timepiece could determine longitude to within half a degree. His clock, called a chronometer later in the 18th century — basically a proto-pocket watch — improved accuracy through balance and spring combinations and kept time within 0.8 seconds per day.

In 1949, the National Institute of Standards and Technology created the first atomic clock, which determined time by measuring how long certain atomic processes last. In 1967, the second itself was officially defined as 9.2 billion oscillations of microwave radiation emanating from a system of cesium atoms. Today’s updated NIST-F2 model boasts an accuracy of one second across 300 million years.

The proposed quantum clock network could operate by mounting entangled atomic clocks on global satellites or stationing them at various labs located around Earth. Because the clocks are quantum-linked, each could almost instantly relay its time to one central node, which would average the times and relay them back. Each clock could thus adjust its accuracy, creating what Komar calls a superclock. With a clock this accurate, scientists could gather more precise real-time measurements of continental shifts, potentially detecting natural disasters like earthquakes.

[This article originally appeared in print as "Time Keeps on Slippin'"]