The Funky Physics of Turning an Animal Transparent

How the science of light rules organic tissue and fiber optics alike. 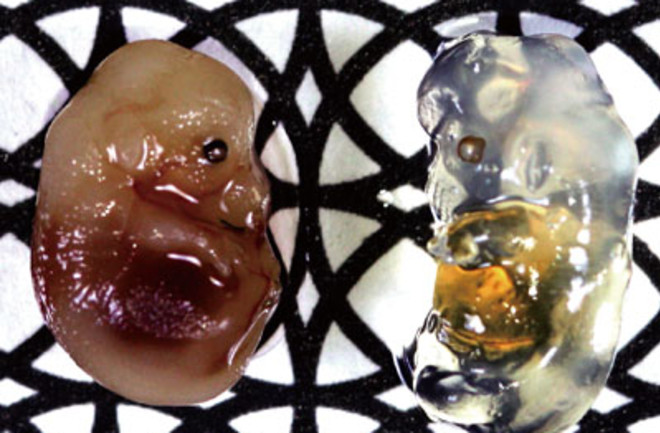 A few weeks ago, I missed a half-day of work, transfixed by what looked like two clear Gummi Bears on my computer screen. It wasn’t a mid-afternoon blood sugar crash; I was contemplating photos of a mouse brain and embryo turned transparent after soaking in Scale—a cheap “clearing agent” that can be used to peer into normally opaque biological tissue.

Discovered last year by researchers at Japan’s Riken Brain Science Institute, Scale is made from compounds commonly found in the biology lab, like urea and the detergent Triton X. Scale’s low cost means it can be used much more widely than previously developed sample-clearing agents, and it allows scientists to see deeper into tissue than ever before. The discovery enabled the Riken team to produce some of the most detailed maps of brain neurons ever published.

And it is all made possible by transparency, that amazing yet literally overlooked property shared by juice bottles, fiber-optic lines, and the air all around. Transparency is important to everything from modern telecommunications to the biology of marine animals, but as I stared at my screen I realized that I had no idea how it works. Why can I see through glass but not the silica sand it’s made from? Why are my wife’s corneas transparent but her big blue irises are not? And why does a pink mouse brain become clear when you plop it into a container of Scale?

It turns out that the physics behind a bedroom window and a freakish, see-through mouse is the same. When a packet of light energy, or photon, hits a solid object, three things can happen. Light can disappear: If the photon has the same vibrational frequency as the electrons in the material it strikes, those electrons absorb its energy, changing the photon from light into heat. Light can also be scattered: The surface electrons can grab the photon’s energy and then eject a photon of the same wavelength, which is how you see pretty much everything that doesn’t emit light on its own. But if the photon doesn’t have the right vibrational energy for absorption, and if the atoms in the material are arranged in patterns that discourage reflection (such as the random jumble of molecules in glass or air), then the photon’s energy passes from atom to atom, emerging on the other side still bright and shiny. Then you have transparency.

At least those are the basics. Once you scale up from the subatomic level, other factors disrupt transparency, like flaws in a uniform material—think of bubbles in a piece of glass. Biological tissue complicates things even more. Creatures like jellyfish have so little internal structure that they are naturally transparent, but when it comes to something as complex as a mouse embryo, it takes extra work to get the photons through.

“For transparency, you have to get rid of scattering,” says Duke University biologist Sönke Johnsen. After 15 years of studying transparent sea creatures, he admits scientists still do not know exactly how certain animals allow light to travel through them. But he does know what ruins transparency: “We observe light when it moves from one refractive index to another. The more indexes it moves through, the more scattering there is.” The varying refractive indices of skin, muscle, and bones make most animals opaque. Scale works by soaking into the cells and creating a uniform refractive index that photons pass through.

Scale represents just one of many ways that a growing mastery of transparency is changing science. Researchers can bump electrons out of aluminum and iron using lasers, making them transparent to certain frequencies of light—an advance that could be important in light-based computing. Revolutionary new transparent ceramics give engineers a tougher alternative to the synthetic crystal amplifiers in the high-powered lasers used in nuclear physics research. And Scale will undoubtedly lead to more extraordinary views inside otherwise opaque creatures.

But please don’t send pictures—I don’t have any more time to gawk.

Jason Daley is a freelance writer based in Madison, Wisconsin.