The Fulani have an old "Berber" (?) element 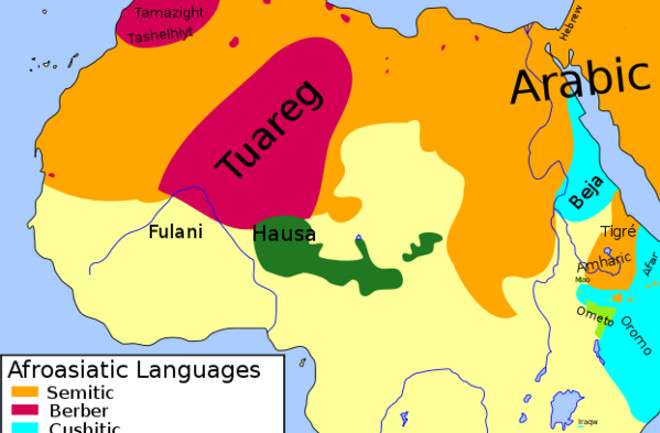 After the second Henn et al. paper I did download the data. Unfortunately there are only 62,000 SNPs intersecting with the HGDP. This is somewhat marginal for fine-grained ADMIXTURE analyses, though sufficient for PCA from what I recall. That being said, the intersection with the HapMap data sets runs from ~190,000 SNPs, to the full 250,000 SNPs (this makes sense since the Henn et al. #2 data set has some HapMap populations in it). So I've been experimenting a fair amount in the past few days, and I thought I would post on one issue which was clear in the original paper, but which I have replicated.

The Fulani (Fula) people of the western Sahel seem to have a relatively old West Eurasian component which has distinct affinities with the "Maghrebi" element discerned by Henn et al. In fact, the non-Sub-Saharan African ancestry of the Fulani is almost exclusively of this origin. To me this serves as a peculiar mirror of what you see in the Cushitic and Ethiopian Semitic peoples of the far east of the Sahel-Sudan latitudinal region. These populations also seem to be compounds of a Sub-Saharan Africa element with a West Eurasian one, but in their case the admixture is almost exclusively from a Southwest Eurasian (Arabian) component. Geographically these two symmetric admixture events make sense, but the exclusivity is still a bit surprising. Additionally, in both the case of the Fulani and the Ethiopian and Cushitic groups the admixture is widely distributed and even enough to imply that they are old events. I also assumed this because in some admixture runs a "pure" Fulani cluster partitions out, which is not unexpected for stabilized hybrid populations (all human populations are stabilized hybrids if you go back far enough).

To give you a flavor of what I'm talking about here are some screen shots of a run which is currently going. It has 180,000 markers. I removed Tunisians and many African populations from the Henn et al. data set, and included in the Utah whites from the HapMap. The individual plots show the ancestral proportions for each Fulani in the data set:

So what can we see here? First, let's reiterate something: as in the case of the populations of the Horn of Africa the West Eurasian element in the Fulani is difficult to find in "pure" form in the populations from which it putatively derived. What does that imply? I think that that means that the Fulani have an origin in relatively recent historic time, on the order of 2,000, not 10,000, years. That is because I am skeptical that the Fulani would be able to maintain genetic distinctiveness for ~10,000 years from other populations around them. In contrast, the last 2,000 years have seen the rise of various cultural institutions, from trans-Saharan nomadism to Islam, which might slow down admixture sufficiently to maintain the differences between the Fulani and their neighbors. It also implies to me that the non-Maghrebi "Near Eastern" element which Henn et al. discerned is relatively a recent phenomenon in northwest Africa, else the Fulani should also carry it. How recent? Probably from Classical Antiquity down to the Muslim period. Observe that many North Africa groups have a red "European" element. This may be from Near Eastern populations, but I suspect that the fraction here is just too high to be explained by that. Also, you can see above that some groups in Morocco have nearly as much of this as Egyptians, but far less of the more genuine Near Eastern components.

In all likelihood the West Eurasian component came to the Fulani via the Tuareg or a related or antecedent population. So if you typed the Tuareg you would probably get a better sense of the "pure" "Maghrebi" genetic profile. These genetic results also can serve as fodder to understanding the ethnogenesis of the landscape of the Sahel. In the map above it is interesting to observe that the Hausa speak an Afro-Asiatic language, even though their West Eurasian component is far lower than the Fulani, who speak Niger-Congo dialects. What gives? I suspect that the difference here is that the Hausa are a case of elite emulation of a cultural complex which was much more integrated and elaborated by the time it arrived on the West African scene. This explains how there could be language shift, while in the case of the Fulani there was none. Another hypothesis is that Afro-Asiatic derives from Sub-Saharan Africa itself, and the Chadic (Hausa) group are basal to the phylogeny. I'll let readers explore the implications of that. A final aspect, I put the quotations in the title because perhaps the Berber dialects spread via elite emulation, and the original Maghrebi ancestors of the Fulani spoke a different language, which has been lost? As they say, for every answer there bloom a thousand questions....