The Forgotten Domain of the Gut Microbiome 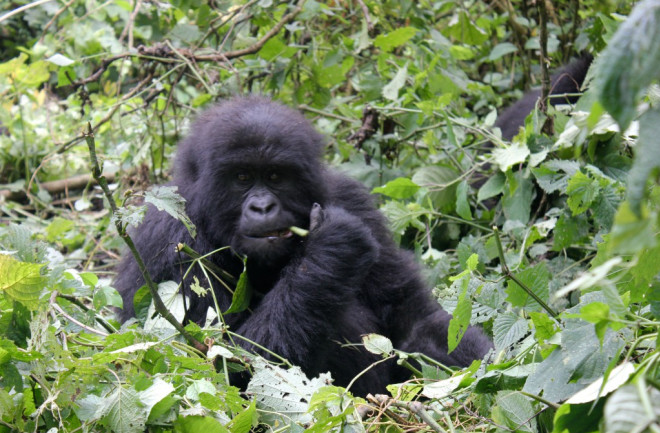 Which microbes could be helping this mountain gorilla digest its food? (Image: Jeffrey Marlow) Over the last few years, the range of known organisms living in the human gut – that complex milieu of microbes known as the gut microbiome – has expanded dramatically. They influence your health, your appearance, and your behavior in largely unknown ways, and yet, despite the thousands of studies that have been published on the subject, the gut microbiome census may be woefully incomplete. Most human microbiome studies go something like this: collect your fecal sample, extract the DNA, amplify representative genes from all available organisms using a “universal” set of primers, and wait for the sequences to roll in. The results typically reveal a vast zoo of bacteria sharing space in the gut with eukaryotic cells; the relative lack of the third domain of life – the Archaea – got Kasie Raymann, a postdoctoral fellow at the University of Texas, wondering if those “universal” primers were as promiscuous as advertised. And if the primers don’t bind to the DNA you’re trying to find, it won’t be exponentially amplified, and it won’t be sequenced. Raymann didn’t restrict herself to humans: she acquired samples from four other great ape species, including chimps from Tanzania, gorillas from Cameroon, bonobos from the Democratic Republic of the Congo, and orangutans from the Atlanta Zoo. And rather than use the typical primers that are intended to bind with both bacterial and archaeal sequences, the team experimented with Archaea-specific versions. The results could not be more clear, exposing a glaring blind spot of “universal” primers and calling into question the completeness of previous genetic surveys of gut microbiomes. Among the five ape species tested, the “universal” primers detected an average of 6 species per animal. The Archaea-specific primers revealed an average of 95. Archaea may be more prevalent than previously believed, but what are they actually doing in the gut? The methane-producing methanogens had been detected previously, and Raymann’s study provides additional evidence that this functional group is dominant: no non-methanogenic lineages were seen in human samples. In the other apes, methanogens were accompanied by ammonium oxidizing Nitrososphaera, revealing additional ecological niches within the gut made possible by different diets or immune system sensitivities. But viewing Archaea on their own is only part of the story. We know that interspecies interactions are essential in many ecosystems, and the great ape gut is probably no different. The researchers showed a correlation between the presence of the methanogen Methanobrevibacter and the bacterium Prevotella. As with any broad sequencing effort, decoding the nature of this partnership is a much taller order, but these data at least provide a compelling starting point. Intriguingly, the archaeal diversity in an animal’s gut microbiome scaled inversely with its relatedness to humans: gorillas and orangutans generally had more types of Archaea, while bonobos and humans had fewer. Because methanogens consume methanol resulting from fruit breakdown, as well as the waste products of plant-degrading Bacteria, vegetable and fruit-heavy diets could bolster archaeal populations. By simply looking more closely and more specifically for Archaea, Raymann and her colleagues revealed a conspicuous gap in microbiome research. It may not be surprising that the microbiome is more diverse and complicated than thought (this could be the motto of environmental microbiology over the last several decades), but the findings offer a novel perspective on great ape evolution and will no doubt influence medical research and treatment in the coming years.