The First Solar Eclipse Seen from Space was in 1966 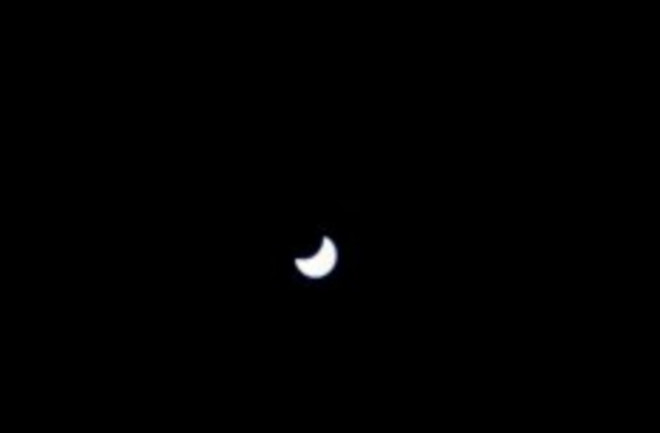 The Gemini program was sort of NASA's overlooked middle child. It didn't have the excitement of being the first time American astronauts flew in space like the Mercury did, and it didn't have the glamour of going to the Moon like Apollo. Which means most people don't know it happened. But the Gemini program was how NASA learned to fly in space, to perform rendezvous and docking maneuvers, change orbits, and test all the technologies it would need to complete the two-week long missions to the Moon. It was also the program that first gave astronauts a unique view of a solar eclipse from orbit.

Gemini 12 was the tenth and final manned mission of the Gemini program. It was commander Jim Lovell's second spaceflight -- he'd flown a two-week endurance test as the pilot of Gemini 7 -- and pilot Buzz Aldrin's first mission. The flight was also the sum of the program’s parts, and as such it was designed as a very busy mission. Gemini 12 would see the crew rendezvous and dock with the Agena target vehicle, perform three spacewalks, do a tethered stationkeeping exercise as well as a series of docked maneuvers with the Agena, use the Agena's main propulsion system to reach a high elliptical orbit, and finally demonstrate an automatic reentry. There were also 14 scientific, medical, and technological experiments on board. The flight plan also included some photography, namely the crew was slated to photograph a solar eclipse from orbit.

But Gemini 12's launch slipped from November 9 to 11, and while all the mission goals remained the eclipse photography was dropped from the flight plan. The new launch date meant the eclipse would overlap with the docked high altitude burn with the Agena's main engine, which was more important. Training for the Moon was just a higher priority than seeing an eclipse.

Spaceflight, however, rarely goes perfectly according to plan. The Agena, launched separately from the Gemini 12 spacecraft, suffered a momentary six percent decay in thrust chamber pressure eight minutes into its flight, which also caused the turbine speed to drop. It made it into orbit safely, but NASA was wary of using the potentially troubled vehicle to boost the crew into a high orbit. So Lovell and Aldrin were clear for their rendezvous and dock with the Agena but not to fire its main engine. The high orbit goal was cancelled.

Aldrin and Lovell before their flight. NASA.

This loss of one objective opened the door for another: now there was some downtime in the flight plan at the same time as the eclipse, so flight directors figured out how to reinstate this lost objective. They still had the Agena's secondary propulsion system (SPS), which had enough power to get the spacecraft into the right position for an eight-second photographic pass at just the right time.

When the word reached the crew, Lovell remarked, "The eclipse got to us after all." "Yes, it looks like it," Capcom Pete Conrad answered.

For the crew, it wasn’t the best addition. Seeing the eclipse meant two burns of the Agena's SPS at the same time they were meant to be working with the Agena, eating, sleeping, and working on other experiments. Of course, eclipses don’t exactly wait, so they moved things around the accommodate the burns.

At 7:05 hours after launch, Jim Lovell fired the Agena's smaller engines to slow his speed by 13 meters (42 feet) per second. And Mission Control was still a little nervous. Conrad told him, "If it [the Agena] gets away from you . . . take it over with the [spacecraft]." But the SPS performed splendidly, and the crew went to bed one burn down.

The burns worked beautifully. A little over 16 hours into the flight, the crew reported seeing the eclipse "right on the money at 16:01:44 g.e.t.” They became the first people to see and photograph a solar eclipse seen from space on November 12, 1966. According to post- flight calculations, the spacecraft passed within about three nautical miles (3.45 miles or 5.55 km) of the center of the 15-nautical-mile-radius (17.2 miles or 27.8 km) umbra core that cut through South America from north of Lima, Peru, to nearly the southernmost tip of Brazil.

[embed]https://www.youtube.com/watch?v=RfszBPZYuFQ[/embed] And speaking of eclipses, the upcoming total solar eclipse on August 21 -- I'll be hosting a live broadcast of the event for Time! I'll be holding down the fort All the info is in the video above! Quick note: Yes, NASA's vintage documents like flight plans, mission reports, and press kits use a mix of metres and nautical miles! Sources: Gemini 12 mission report; On the Shoulders of Titans by Hacker and Grimwood.