The First Carbon-rich Asteroid Found in the Kuiper Belt 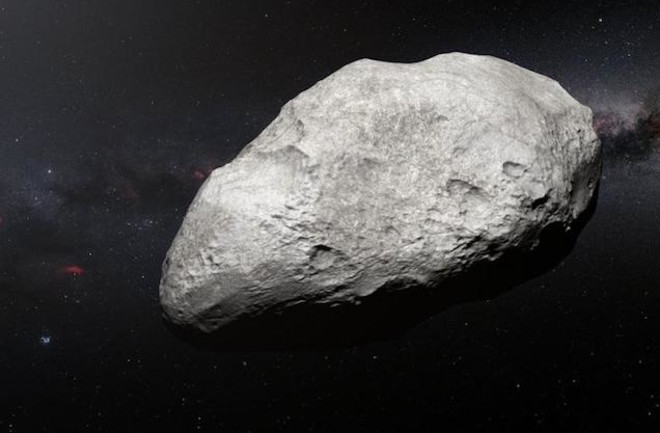 An international team of astronomers was able to determine the chemical composition of Kuiper Belt Object 2004 EW95, an asteroid 2.5 billion miles (4 billion kilometers) away from Earth. Its makeup revealed elements that are prominent in the inner solar system, suggesting a significant outward migration. (Credit: ESO/M. Kornmesser) It’s believed that our solar system’s gas giants caused quite a ruckus in their infancies. As they exited their tight orbits and began outward migrations, their forceful journeys caused small, rocky bodies in the inner solar system to be ejected. Some making their way all the way out to the Kuiper Belt — a thick and extended ring of comets, asteroids and other small objects that surrounds the outer solar system. However, due to the billions of miles that lie between Earth and the Kuiper Belt, identifying an inner solar system asteroid in our icy outskirts was far from easy. But now, an international team of astronomers has discovered Kuiper Belt Object 2004 EW95 — a carbon-rich asteroid that supports our gas giants’ destructive tendencies.

The outward migration of Jupiter, Saturn, Uranus and Neptune is a critical element to our current solar system formation theory. Multiple models suggest that after these gas giants formed, they began rampaging away from the Sun until they hit their current orbital locations, causing carbon-rich rocky pieces in the inner solar system to scatter about. Most of these asteroids were ejected toward the Sun, where other carbon-rich objects reside, but some were sent in the opposite direction, toward the outer edge of our solar system. Since objects high in carbon aren’t common out in the Kuiper Belt — an icy region past Neptune — verifying their distant existence could further support the current formation theory. Using NASA’s Hubble Space Telescope, astronomer and research team member Wesley Fraser first spotted Kuiper Belt Object 2004 EW95 while conducting routine observations of the Kuiper Belt. The strong spectral lines radiating from this unusual asteroid caused it to stand out from its peers, which have relatively dim spectra. "The reflectance spectrum of 2004 EW95 was clearly distinct from the other observed outer Solar System objects," said lead researcher, Tom Seccull of Queen’s University Belfast, in a news release. "It looked enough of a weirdo for us to take a closer look." Since Kuiper Belt Object 2004 EW95’s spectrum shines brightly, the light can be broken down into different wavelengths, enabling researchers to determine its chemical composition. To identify the chemical composition of such a distant object, the team used the X-Shooter and FORS2 spectrographs on the European Space Agency (ESO)’s Very Large Telescope. But these powerful instruments didn’t change the fact that the asteroid, which stretches 186 miles (300 kilometers) across, is 2.5 billion miles (4 billion kilometers) away from Earth. On top of that, its carbon molecules cause it to appear dark in color. "It's like observing a giant mountain of coal against the pitch-black canvas of the night sky," said Thomas Puzia, an astronomer at the Pontificia Universidad Católica de Chile and co-author of the research paper published in The Astrophysical Journal Letter. But the research team was able to overcome the obstacles and identify clear signatures of carbon, iron oxides, and phyllosilicates (sheets of silicate minerals), all of which are elements commonly found in the inner solar system that had never been identified in a Kuiper Belt object. From the chemical breakdown, the researchers were able to conclude that Kuiper Belt Object 2004 EW95 was likely born in the asteroid belt between Mars and Jupiter, and made the long journey outward alongside our gas giants. "While there have been previous reports of other 'atypical' Kuiper Belt Object spectra, none were confirmed to this level of quality," said ESO astronomer Olivier Hainaut. "The discovery of a carbonaceous asteroid in the Kuiper Belt is a key verification of one of the fundamental predictions of dynamical models of the early Solar System." Despite ever-advancing technology, many details of our solar system’s early years are still shrouded in mystery. But by continuously uncovering clues that shed light on our chaotic history, the formation and evolution of our solar system might shed their mysterious personas. [This article originally appeared on Astronomy.com]