The Fight Over Who Really Found the First Exoplanet

Astronomers are almost ready to declare the winner of a decades-old planetary race. 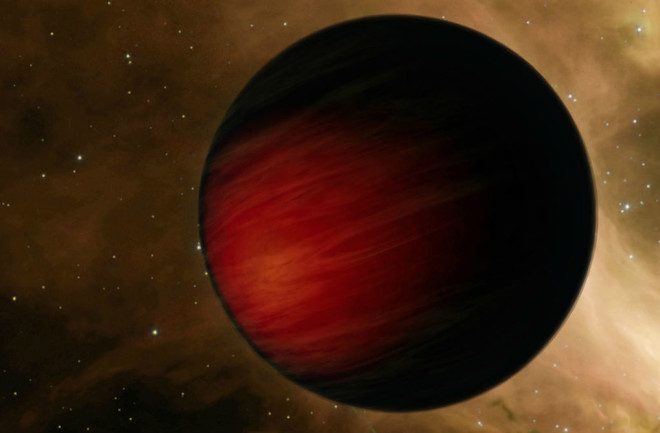 The object known as HD 114762b, illustrated above, was originally classified as a type of star ⁠— but it may be the first exoplanet we ever spotted. (Credit: NASA/JPL-Caltech)

Exoplanets, nowadays, are commonplace. Impossibly hot gas giants, rocky super-Earths and prolific seven-planet systems have captivated scientists and the public alike. So it may be hard to remember only 30 years ago, when every new claim of a world outside the solar system was revolutionary and met with disbelief.

In that uncertain era, one massive object danced along the boundary between planets and stars. The astronomers who discovered the object played it safe and classified their newfound world, dubbed HD 114762b, as an obscure type of pseudo-star. A few years later, astronomers discovered two worlds orbiting another star, a pulsar named PSR 1257+12, and that was that — the era of uncertainty was over and the first exoplanets had been found, destined for the history books.

But what if that history is wrong? While the two pulsar planets got all the glory, the real first exoplanet may have languished in obscurity: New data and better instruments mean astronomers are increasingly suspicious they made the wrong call about HD 114762b all those years ago.

“It’s the story of people’s advancing knowledge and changing ideas,” says David Latham, senior astronomer at Harvard University and co-discoverer of HD 114762b. This isn’t a matter of personal glory for him. It’s simply a question of scientific legacy.

The two worlds around pulsar PSR 1257+12, shown in this rendering, went down in history as the first known exoplanets. They may soon be dethroned. (Credit: NASA/JPL-Caltech/R. Hurt/SSC)

In the 1980s, astronomers started figuring out how to find planets orbiting other stars — assuming any such worlds even existed. The limits of optical telescopes made it essentially impossible to spot such a world visually; even today’s instruments can see only the biggest and nearest exoplanets.

So researchers took another approach: They began to hunt for the effect such a world might have on its parent star. One popular method involved looking for the gravitational tug that a planet might exert on its sun as the world moves in its orbit. Find a star wobbling around in place, and you’ve likely found an exoplanet nearby.

These searches weren’t easy. In those early years of hunting, a handful of initial discoveries came and went, each announcement of a new world retracted when follow-up observations revealed errors, both human and instrumental. Exoplanet claims were met with growing doubt, and astronomers learned to tread lightly before announcing a new find.

In this environment of disbelief, Latham and his planet-hunting colleague, Tsevi Mazeh of Tel Aviv University, began their observations, hoping to find a telltale wobble. As Latham and Mazeh searched, however, they noticed something unusual.

Like most astronomers, they were calibrating their telescope with a standard, constant star, in this case HD 114762, some 130 light-years away. But on April 1, 1988, the researchers noticed a possible variation in the supposedly unchanging object. Reviewing seven years of archived observations, and confirming with an independent planet-hunter, Michel Mayor at the University of Geneva, they found that tiny shift was consistent. Something was orbiting HD 114762. They christened the potential exoplanet following the standard naming conventions for such an object: HD 114762b.

The object soon proved a strange one. Initial observations revealed that it took HD 114762b a mere 84 days to complete one orbit — its “period,” in astronomer-speak. It also followed an extremely elliptic path, much more stretched out than the more circular orbits of our solar system’s planets. The world was unusually close to its host star, too, just a third of the average distance between Earth and the sun. And it was big, far more massive than Jupiter — though (crucially, it would turn out) the team couldn’t determine its exact mass.

“It was a giant planet with the same period as Mercury,” Latham said. “That sounded crazy in those days.” That, and the stark differences between it and our solar system’s planets, made such a world seem downright bizarre.

The trio of researchers started to wonder if they really had found a planet. But what else could it be?

The obvious other choice was a star; after all, double star systems litter the cosmos. But HD 114762b didn’t look like a star — it was too tiny. Stars must be at least a certain size because without enough mass, they won’t be able to turn on and begin the process of nuclear fusion that powers all stars.

Right at that size boundary, however, lie objects known as brown dwarfs. Often called “failed stars,” these stellar wannabes have masses 13 to 80 times Jupiter’s — huge for a planet, but not nearly big enough to be a full-fledged, fusion-powered star. (Our sun, for example, weighs around a thousand times as much as Jupiter.)

The first real brown dwarf candidate was only found at the end of 1988, just as the team was struggling with classifying their find. If HD 114762b was too strange to be a planet, maybe it was one of these weird semi-stars instead?

It’s a reasonable question, so the team’s next step was straightforward: Find out HD 114762b’s precise mass, then check to see if it falls within the range of planets or of brown dwarfs. But that’s easier said than done. In space, there’s no natural “north,” so a planet can orbit its star in any orientation. It could face us, like a clock’s hand going around its center, or it could appear edge-on. A tiny wobble could be the result of a wimpy planet, or a huge world could orbit it at an inconvenient angle for us to see much of its tugging. Without knowing which is the case, a star’s wobble can only reveal so much about an orbiting object’s mass. And, unfortunately, there was no way to determine HD 114762b’s orbital tilt.

“Finding the orbital inclination of this system is clearly of great importance,” the team wrote in the 1989 Naturepaper announcing the discovery, but the measurement was “too small to be detected in the near future.” Stymied by the technology of the time, the researchers were left with an object that could very well be a brown dwarf or a planet, and whose mass, as best as they could figure out, straddled the line between the two.

“There was a question between the team [members] on how to present the discovery,” says Mazeh. “There was a huge debate.” The idea of: A) a world so large, in B) such a comparatively close orbit that was C) extremely lopsided, raised serious doubts — especially given the high-profile exoplanet retractions in the past. Ultimately, the trio decided to classify the world as a brown dwarf rather than a planet, though the paper noted it could be either.

Second Chance to Be First

But times have changed. Now that we’ve found nearly 4,000 exoplanets and counting, astronomers no longer consider close-orbiting gas giants unusual. And it turns out our solar system is itself a bit of an outlier, since its circular orbits are fairly rare. That negates two of the three strikes the team had against classifying HD 114762b as an exoplanet, leaving only the third: its uncertain (but too big for most planets) mass.

That’s where the European Space Agency’s Gaia observatory could help. The orbiting spacecraft has made extremely precise measurements of the motion of over a billion stars since launching in 2013. It scans the entire sky every six months, so by the end of its mission this year, it will have studied — briefly — each of those billion stars 70 to 80 times.

In its next data release, scheduled for mid-2021, Gaia should reveal the precise motion of the star HD 114762. That knowledge would finally allow researchers to measure a precise mass for HD 114762b and determine its true nature.

Latham and his crew are confident in the outcome. Many astronomers already recognize HD 114762b as a planet rather than a brown dwarf, based on its estimated mass from the original paper and its likely formation. It’s even already listed in NASA’s official exoplanet catalog, and many astronomers have unofficially named the world “Latham’s planet.”

Though the scientific community has opened its arms to the idea that this is a true exoplanet, they still need the hard evidence. After all, should it turn out HD 114762b was the first detected exoplanet, it would dethrone the pulsar planets as No. 1 — the history books, and our outlooks, would need updating.

Beyond that, though, Latham just wants Gaia’s solid measurements. He and Mazeh are looking forward to putting the issue to rest in 2021, even if it takes a bit more patience.

Nola Taylor Redd is a freelance science journalist with a focus on space and astronomy. Find her on Twitter @NolaTRedd. This story originally appeared in print as "The Fight for First Exoplanet."