Astronomers are proposing to use the EHT to look at blazars, active black holes hurling jets of material directly at Earth. 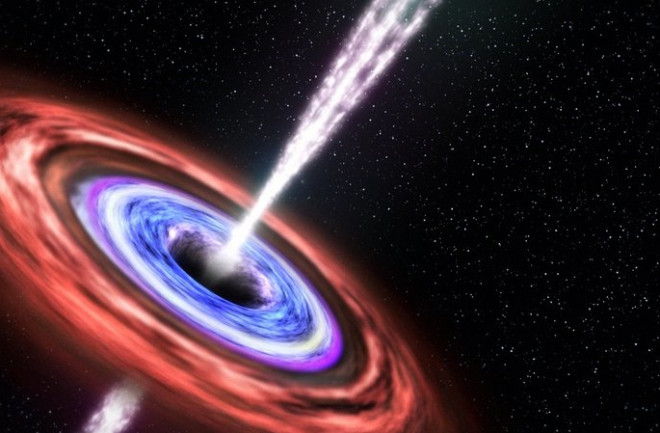 The Event Horizon Telescope made history on April 10 when it captured the first image of a supermassive black hole’s event horizon at the heart of galaxy M87. While there’s only one other target close enough to image that way – the black hole at the center of our own Milky Way – there are plenty of other targets where EHT’s sharp gaze can still make breakthroughs.

Astronomers are proposing to use EHT, as well as another global network of radio telescopes called the Global mm-VLBI Array, to image the jet of a blazar named PKS 1510-089 that sits more than 4 billion light-years away. A blazar is one of many names for a black hole that is actively consuming material, resulting in high-energy jets shooting out of the top or bottom of the black hole. With a blazar, the jets are pointed almost directly at Earth, making them especially bright.

This particular blazar is one of the brightest known, and it’s also highly variable, meaning its brightness changes on short time scales. Many blazars vary on the scale of months to days, but PKS 1510-089 varies on the scale of minutes to hours. Scientists think the powerful, variable jets are the result of the black hole twisting magnetic field lines, but they’ve lacked the technology to peer close enough to discern the details — until now.

Nicholas MacDonald, from Germany’s Max Planck Institute for Radio Astronomy, presented the case for observing PKS 1510-089 with EHT on June 20 at the annual meeting of the Canadian Astronomical Society in Montreal, Quebec, Canada.

In 2008, the Fermi Gamma-Ray Telescope launched, opening a new era of exploration of the high-energy universe. “The big discovery of the last decade,” says MacDonald, “was that blazars dominate the gamma-ray sky. These classes of objects are all bright, but [PKS 1510-089] is one of the brightest.”

That makes it a good target for EHT, which is a network of telescopes spanning the globe, acting together as one giant telescope the size of the planet. MacDonald wants to use EHT plus ALMA, a radio observatory in Chile composed of yet another 66 telescopes networked together. The ALMA array is much smaller in overall size though, spreading out across only between 500 feet and 10 miles, depending on the movable telescopes’ configuration.

The problem with EHT acting as one telescope the size of the planet is that it’s not actually one telescope. It’s a telescope with massive holes in it, and that makes the data less reliable. Because ALMA is in the Southern Hemisphere and is composed of a dense cluster of telescopes itself, it can drastically improve EHT’s results by essentially filling in gaps in EHT’s coverage. Only the South Pole Telescope sits closer to Earth’s pole.

Astronomers ultimately hope to understand what creates the powerful jets they observe, and that means taking the closer look with EHT.

“The idea is you have a central supermassive black hole, billions of times the mass of the sun,” MacDonald explains. The black hole is not just consuming gas and dust in a whirlpool, but yanking spacetime itself along for the ride. Researchers think the jets are produced when magnetic fields also get caught and twisted up in this motion, launching relativistic beams of charged material. But they don’t know what it looks like in detail.

“Is it highly ordered, or disordered?” MacDonald wonders. The options are that the magnetic field lines are either turbulent and snarled, or, alternatively, highly ordered in a helical structure. Theorists can reproduce the blazar behavior observed by telescopes with either ordered or disordered computer models of the magnetic fields. So they need to look closer to figure out what’s really going on.

“The big game changer is ALMA,” MacDonald says, and especially ALMA’s cooperation with the other EHT telescopes. “And so we’re able to – for the first time – resolve down to the scales where we can distinguish where the field is ordered or disordered.”

MacDonald was approved once for these observations, but weather and technical difficulties at multiple points around the globe cheated him of his images. He’s trying again, and the observations, if approved, would be taken sometime between October 2019 and September 2020.

Editor’s Note: This story has been updated for clarity. An earlier version of this story incorrectly stated the size of supermassive black holes that launch blazars. They are billions of times more massive than our sun.