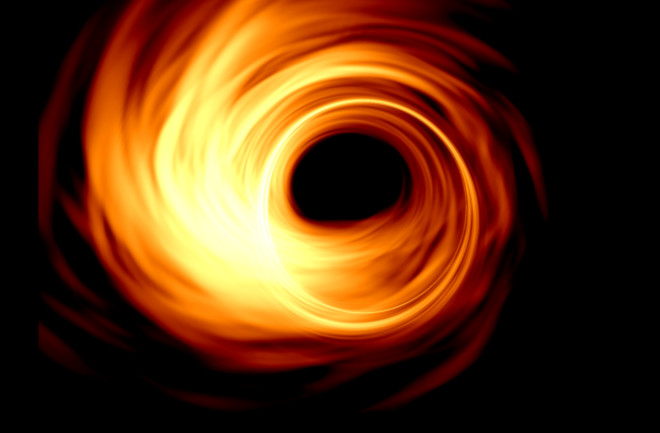 While still a simulation for now, the Event Horizon Telescope has promised to image a black hole, and they're poised to make a big announcement. (Credit: Hotaka Shiokawa) No, you can’t actually take a picture of a black hole. But astronomers have promised to do the next best thing: To image the seething chaos just outside the black hole, known as its event horizon. To capture this region, just on the cusp of the black hole itself, astronomers have had to link telescopes from across the globe and focus them on the closest, most massive black holes known: Sagittarius A* (pronounced “A-star”), which resides at the center of our own Milky Way galaxy, as well as the even larger supermassive black hole that sits at the center of nearby galaxy M87. The result, known as the Event Horizon Telescope (EHT) had its big observing run in April of 2017. Researchers warned that it would take time to piece together the data. And the team has repeatedly dropped hints that the results could be ready soon, only for the project to continue on. But based on their upcoming press event, set for April 10, it seems that time may have come, and that viewers are about to see the first-ever picture of a black hole’s event horizon.

EHT is actually a team of telescopes working together in a process known as interferometry. This lets the connected telescopes behave as if they had one enormous collecting area. Of course, there are gaps between the individual observatories, and each telescope is unique and behaves in slightly different ways – as well as experiencing different weather, and having a different view of the black hole, though this last is actually the feature that makes the combined imaging so accurate. But figuring out how to stitch all that data together is why researchers have taken so long to turn the 2017 data into a presentable image. But the cooperation pays off. Individually, the telescopes are world-class. And together, they deliver enough observing power that a person standing in New York City could use the EHT to read the writing on a quarter in Los Angeles, something none of them could do individually. It’s not clear which of the black holes targeted by EHT may be ready to show off to the public. It's also not for certain that they've actually accomplished the feat yet. But after such a wait, the pictures should be stunning. The National Science Foundation, which helps fund EHT, will be hosting the press conference. Due to the collaboration being spread across the globe, other press conferences will happen simultaneously in Brussels, Santiago, Shanghai, Taipei and Tokyo, highlighting the cooperation and vast resources it takes to make a project this large succeed. The announcement will be livestreamed at the NSF’s webpage.