The Eruption and Humanitarian Crisis at Indonesia's Sinabung Continues 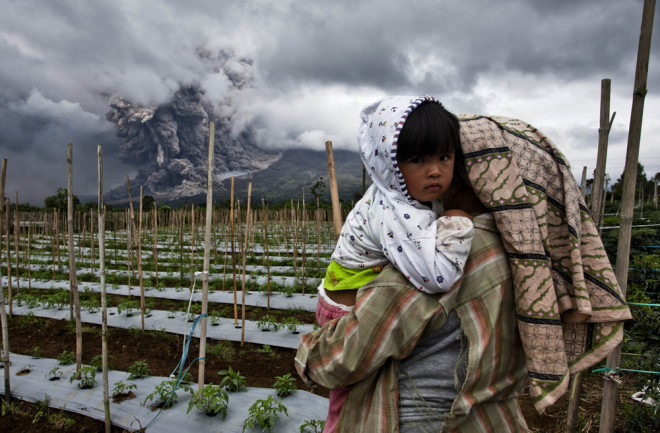 A woman carries her daughter in a nearby field as Mount Sinabung spews pyroclastic ash and debris on January 4, 2014 in Karo District, North Sumatra, Indonesia. Photo by Ulet Ifansasti/Getty Images

Webcam captures of Sinabung, showing (left) a pyroclastic flow and (right) the debris left from repeated pyroclastic flows, both on January 8, 2013. Image: PVMBG webcam. In what is becoming a larger danger (and potential disaster), activity at Sinabung appears to be increasing daily, with more explosions and resultant pyroclastic flows streaming down the slopes of the volcano (see right) in North Sumatra, Indonesia. Some of these flows are reaching up to 5 km from the summit of Sinabung. All of this activity is centered around the growing lava dome at the summit of Sinabung -- that dome was filmed in low light this past weekend and it really shows the glowing dome with hot debris (the main component of the pyroclastic flows) cascading down the slopes. The pyroclastic flows are leaving a clear light grey deposit on the volcano, ominously pointed towards the location of the PVMBG webcam (see below). The plume from Sinabung is regularly reaching 4-5 km (13,000-16,000 feet) with hundreds of small-to-moderate explosions over the past week. Looking up information on this eruption, I came across what might be the most striking image I've seen that brings together this volcanic eruption with the people being impacted by this activity (see above). This woman is holding her daughter in front of crops that are grown near Sinabung, all with a stunning pyroclastic flow from the volcano being erupted in the background. I can't even fathom what it must be like to be near your home knowing that it could be destroyed by an eruption of this scale. With eruptions such as this current activity at Sinabung, it can be easy to forget how disruptive to people's lives they can be. Although some eruptions do have singular explosions that cause destruction, many eruptions are not simply a single event. Activity can stretch on for weeks, months, even years and the displacement of people living near the volcano can cause a crisis independent of the activity itself. I've written about how significant a problem this is in a volcanically-active country like Indonesia -- how does a country deal with the displacement of tens of thousands of people for an undefined time or, in some cases, forever? Two main problems arise: (1) keeping living conditions sanitary and safe at refugee camps can be very difficult and (2) long-term evacuations can cause people to become complacent and then they try to return homes/farms before it is safe. These are some of the biggest challenges during volcanic hazard mitigation. It may have taken a few months, but currently, at least 22,000 people have been evacuated from danger zone (now defined at 5-7 km) around Sinabung. This has put a heavy strain on the refugee camps set up to deal with the influx of refugees and if the eruption continues to intensify, then these numbers will grow. We mustn't forget that even without the "big bang" eruption, people are put in danger's way by merely being moved