The Ephemeral Nature of Magma Prior to Eruption 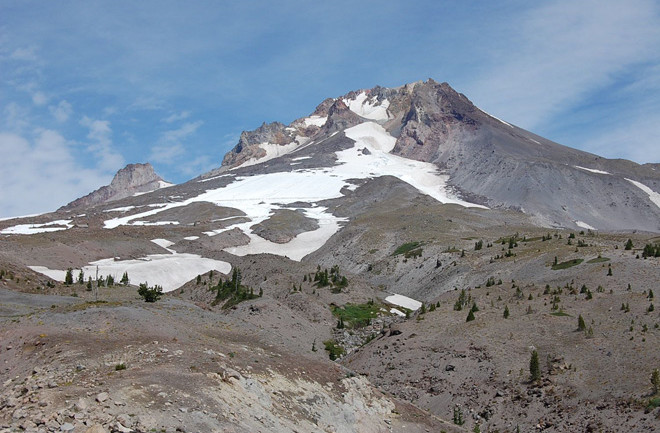 Mt. Hood in Oregon. A new study by Cooper and Kent (2014) suggests that eruptible magma is only present for years to centuries before an eruption. Image: Erik Klemetti One of the biggest questions in petrology and volcanology today is the state of magma underneath an active volcano: is it solid, liquid, both? It is a question that drives a lot of my research at the Lassen Volcanic Center in California and is paramount in understanding the events that lead to an eruption. The classical model is that magma is stored under a volcano as a liquid (the "giant vat" model) that then erupts. This model has been supplanted by one of magmatic bodies that are partially solidified and then remobilized (rejuvenated) by new intrusions of hot magma from depth (the "crystal mush" model). However, the timing of these rejuvenation events is tricky: how long before an eruption are the events that heat up the mush ... and how much of that magmatic system is molten during the periods between eruptions? A new paper in

tries to quantify some of these questions by looking at the age and compositional data recorded in plagioclase feldspar crystals. Kari Cooper* and Adam Kent have used radiometric ages of crystals (using U-Th and Ra-Th) along with trace element zoning of crystals and the distribution of different sizes of crystals to at least offer constraints to how long the eruptible magma at a volcano may have been in that eruptible state. What is really boils down to is this: heat. There is copious data now (including what I have found in my work at Tarawera in New Zealand and at Lassen and Chaos Crags in California) that much of the history of a magmatic system beneath volcanoes in continental arcs is spent as a mush -- that is, a network of crystals with some liquid (i.e., magma) between them. This mush is like >50% crystals, so it behaves like a plastic or solid (high viscosity), not as a liquid (low viscosity) ... and it is tough to erupt anything acting as a solid. However, if you heat that mush back up, you remelt a lot of the crystals, thus lowering the percent crystals and, in a sense, defrosting the magma so it can behave like a liquid again ... and when it can do that, it can erupt. Now, this idea isn't new. What Cooper and Kent (2014) shows using data from crystals found in lava at Mt. Hood in Oregon (see above) is that you can actually put timescales to how long those crystals spent at high temperature (rejuvenation) as a percent of their whole history. This is where we start: when did the initially crystal form? At Hood, many of the crystals (using U-Th and Ra-Th dating techniques) are between 124,000 and 21,000 years old.

A zoned plagioclase feldspar crystal in a rhyolite from Tarawera, seen in an electron backscatter image. This zoning could be the result of heating of the crystal after crystallization. The crystal shown here is only a few millimeters across. Image: Erik Klemetti By examining the zonation of strontium (Sr) in the plagioclase feldspar crystals (see above), you can then calculate how long that crystal was moved to higher temperature conditions. This is because Sr will diffuse out of the crystal at high temperatures (say, between 750-900ºC), so looking at a profile of Sr concentrations in a crystal, you can calculate how long it was in hot conditions. At Hood, this number looks to be anywhere from a few decades if the magma was very hot (>900ºC) conditions to a few thousand years if it was less hot (closer to 750ºC). The rest of the time, the crystal was at temperature well below 750ºC, in other words, locked in a mostly solid mush of crystals. Looking at the sizes of plagioclase feldspar crystals in the lava at Hood suggests that, at typical growth rates for plagioclase (i.e., very very slow), the sizes of crystals present in the lava could have taken between 1-100 years to grow. This timespan likely represents how much time the magma was at the right conditions to grow plagioclase (that is, before it became close to solid). Both this and the Sr diffusion data tell us the next piece: how long were the crystals hot?

Figure 1 from Cooper and Kent (2014), showing the relationship between crystal ages and evidence of heating. The green and blue symbols are crystal ages, while the lines are diffusion and crystal size distribution ages. Overall, they show a pattern where crystals spend much of their existence in magmatic systems that are too cold (viscous) to erupt. Image: Cooper and Kent (2014), Nature. Take these two pieces of information -- crystal ages and time spent "hot" -- and we can determine how long that magmatic system may have been hot enough to erupt. Your average Hood plagioclase crystal that formed 21,000 years ago might have spent only 1-12% of its entire history, a few hundred to a few thousand years, in conditions that would have allowed eruption of the magma (think: hot). The rest of the time, it is in conditions where the magmatic system was cool enough to be "locked" as a solid. So, the magmatic system under Hood likely spends most of its time "cold" (at least magmatically-speaking) and is then rapidly heated up and remobilized prior to an eruption, in a span that could be years to centuries. This would help explain why at most arc volcanoes like Hood, we never seismically image large pools of magma just sitting around beneath the volcano. These relationships between crystal ages derived from different methodologies have been noted at other arc volcanic systems around the world (see above), so this could be the norm for most. From a volcano monitoring perspective, it means that the events leading up to an eruption might not take millennia, as previously though, but only a few years. It also means that if you do find areas of liquid magma beneath a volcano, it could be a clear sign that an eruption is in the works, and relatively soon. One example might be at Laguna del Maule in Chile, where liquid magma has been seismically imaged underneath the caldera. We've been seeing decades of activity that support reheating of the system beneath the volcano, and this rejuvenation and remobilization may be occurring right now. *{Disclaimer: This paper was written by two people I have worked with closely. Kari Cooper is my former postdoctoral adviser at UC Davis and Adam Kent is a former professor of mine at Oregon State. Both are current collaborators on different projects.}