Female hominids may have cooperated to help rear their young. 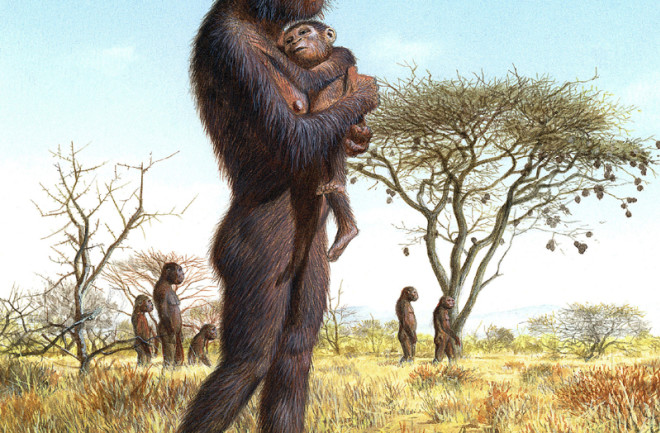 Mommy groups may be a thing of the past — literally. Researchers now contend that early Homo species probably collectively raised their offspring within female care networks.

As these early Homo species evolved, mothers birthed bigger, more dependent babies that they couldn’t raise alone. By analyzing existing research, Adrian Bell of the University of Utah, Katie Hinde of Harvard and Lesley Newson of the University of California, Davis, developed an alternative hypothesis to explain how those females managed.

“[We] were suspicious of the idea of mother staying home with the kid while dad brought back food because no other monogamous mammal has evolved such a parenting arrangement,” Newson says.

Their “cooperative mothers” hypothesis suggests that parental care and nursing responsibilities shared by a group, or alloparenting, provided a highly adaptive strategy. Their study contradicts the idea that pair bonding (think Adam and Eve) represents the most primal social arrangement. Likewise, another popular origins trope, “Man the Hunter,” depicts evolution as driven by an early dietary shift and a dependence on males for precious meat, implying that women mated only with males who were successful hunters. Instead, these researchers say cooperative mother networks, along with more indirect help from males, propelled this evolution. Alloparenting also allowed mothers extra time to gather food and even hunt.

So it seems these females played a key role in the foundation of humanity, and all by banding together.

[This article originally appeared in print as "It Took a Village."]