The Demise of a Discovery: BICEP2 and Gravitational Waves 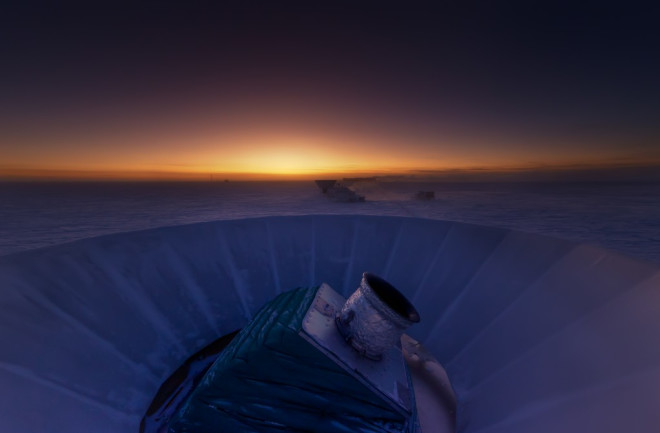 The sun sets on the BICEP2 telescope in Antarctica. Credit Steffen Richter, Harvard University Last week, BICEP2 scientists — who in March announced evidence of cosmic inflation, a potentially Nobel-worthy find — threw handfuls of dust on the grave of their own results. The official paper [pdf], just published on the BICEP website, tells the story of how they mistook cosmic dust for “primordial gravitational waves,” and why everybody needs to calm down and stop trying to bury inflation, too.

Just 10^-35 seconds after the Big Bang, cosmologists (or at least most of them) believe the universe expanded in hyperdrive — faster than it ever has since and faster than it ever will again. This ballooning, called inflation, smoothed everything out. It turned the cosmos into the roughly homogenous place we see today, and perhaps created other universes that add up to the sci-fi-sounding “multiverse.” But it’s difficult to find direct evidence that inflation actually happened (after all, it was a long time ago). That’s where B-modes, which the BICEP2 team saw, come in.

You can’t spread a universe out that spectacularly and not expect to leave some stretch marks. Inflation would have made waves in the so-called “fabric of the universe” — spacetime itself. These gravitational waves would have left their fingerprint on the light leftover from the Big Bang. This light is called the cosmic microwave background (CMB). The gravitational waves’ fingerprint — a twisting of the light’s orientation — looks a bit like yours: a swirling, cirrus-like pattern called “B-mode polarization.” Today, with our fancy telescopes, we finally have the ability to scan for that fingerprint. And in March of 2014, researchers using BICEP2, a South-Pole telescope, claimed they’d found it.

So what’s the problem?

Inflation doesn’t actually have a unique fingerprint. Dust in our own Milky Way twists the signal the exact same way. So do distant, massive galaxies. This “lensing” by galaxies is well understood, and the BICEP2 scientists subtracted it out, but it turns out they hadn’t done such a robust job cleaning up the dust. Immediately after the BICEP2 announcement, other scientists began to raise doubts: Maybe their B-modes came only from dust.

And now for a different metaphor.

To find out how “loud” the gravitational-wave B-modes are, scientists have to subtract lensing B-modes (easy) and dust B-modes (harder). Imagine that your neighbor turns her radio to FM station 107.5 loud enough so you can hear it; a car across the street also blasts 107.5; and you stream it from your laptop. The song will be louder than if you alone were playing it. If you want to know how much of the sound comes from the car, you have to subtract the sound coming from your own computer. Easy enough. But you also have to subtract your neighbor, and to do that, you have to go talk to your neighbor and find out how loud their radio is.

This artist’s impression shows how photons in the Cosmic Microwave Background (CMB, as detected by ESA’s Planck space telescope) are deflected by the gravitational lensing effect of massive cosmic structures as they travel across the universe. Image by ESA/Planck

Talking to the neighbors

The BICEP2 team didn’t have a good map of the dust’s contribution to the total B-modes, because such a map didn’t exist until the Planck telescope made one. Planck is a precise CMB cartographer, and it can see multiple frequencies — specifically ones around 353 MHz, where dust is strongest. (Dust displays itself differently at different frequencies.) But Planck’s results weren’t yet available when the BICEP2 team wanted to have a press conference. They believed their B-modes came from a place where the dust wasn’t very thick. They didn’t think it was a problem. But they were wrong. And that’s what the new paper, the old controversy, and the continuing saga are about. The BICEP2ers joined forces with Planckers and added in another South Pole telescope — the Keck Array — for good measure. Here’s what they found:

Planck sees essentially the same B-modes in the same places as BICEP2 did. The fingerprints are a match.

Planck’s data shows more dust in the way, which means the dust’s contribution to the total B-mode signal is bigger than the BICEP2 team thought. When they subtracted the well-known lensing and the newly-known dust signals from the total, there was almost no signal left — definitely not enough signal to declare a detection of gravitational waves. In the radio analogy, if you find out the neighbor’s radio is louder than you thought, the faraway car’s radio must be softer than you thought — maybe so soft you aren’t actually hearing it at all.

The news by the numbers

Scientists measure how “loud” gravitational wave B-modes are using a ratio called r. r measures, to put it crudely, how “powerful” inflation was. It compares primordial gravitational waves to “density perturbations,” or lumpiness in the young universe. The stronger gravitational waves are, the more forceful inflation was, and the bigger r is. The whiz-bang BICEP result from March 2014 claimed that r was a whopping 0.2 (OMG, I know). Scientists had expected it to be (and early Planck results suggested it was) closer to 0.1. Inflation was more epic than we thought! And we already thought it was pretty epic! was the science world’s excited reaction to that first result. Now, though, the team have faced the dreary reality that dust accounted for most of the signal. Maybe all of the signal. Maybe r is 0, meaning there were no gravitational waves, there was no inflation, and we must trudge back to the whiteboard to figure out what the hell happened at the beginning of the universe. But don’t pick up that dry erase marker just yet. There are a lot of r’s between 0 and 0.2. The smaller r is, the harder those cirrus-y fingerprints are to detect, and the longer and harder we’ll have to look for them. Now that the dust has settled, the search can continue.