The Decades-long Struggle to Draw a Realistic Black Hole 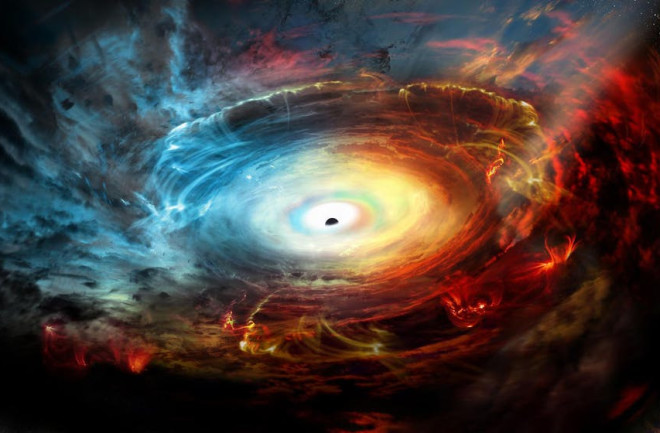 (Credit: NRAO, AUI, NSF) We're probably going to get our very first actual picture of a black hole next week. Researchers with the Event Horizon Telescope (EHT) have scheduled a press conference for the morning of April 10, and they're expected to unveil an image of a supermassive black hole. It will be the first time humanity has actually seen one of the massive objects with our own eyes, and scientists are understandably excited about what the image will tell them.

But, images of black holes have been circulating for years, right? Magazines, including this one, routinely run pictures of black holes alongside stories — you probably already have a mental image of what I'm talking about. Black sphere, colorful spiral of gas ... don't we already know what a black hole looks like? Well, kind of. All of those pictures are artistic representations based, sometimes loosely, on theories about what physics tells us a black hole should look like. So, we have a pretty good idea of what a black hole might look like. The reality, however, is that we don't actually have any confirmation. As EHT member Katie Bouman puts it in a TEDx talk, there could be an elephant at the center of our galaxy for all we know. We'll likely know the truth soon, though it won't necessarily look anything like what we may have come to expect. That's for two main reasons. First, black holes are so far away that the picture will probably be much blurrier than most artistic representations show. Also, Albert Einstein's theory of general relativity tells us that spacetime bends in weird ways near a black hole — a fact not usually accounted for by artists. There's another reason that drawings of black holes take some degree of liberty, one that's staggeringly obvious: You can't see a black hole. By definition, a black hole is a region of space where no light escapes. No light means no picture. This means that quiet black holes, those that aren't sucking up gas or other matter, are effectively invisible. And for those that are snacking on matter, called active black holes, it's no straightforward task either. Thick dust clusters around many active black holes, shrouding their forms. Some betray their presence with powerful jetes of matter thousands of light-years long, though their hearts often remain hidden. The most blindingly bright of these are called quasars, and they are indeed hard to miss. But quasars are by far the minority.

A cloud of dust surrounding an active black hole emitting relativistic jets. (Credit: NASA/SOFIA/Lynette Cook) To get around these issues while maintaining some sort of aesthetic sensibility, many space artists have opted for a kind of idealized black hole image. You can think of this as a black hole boilerplate, and it contains a few key components.

First off, there's the black hole itself, the sphere or void at the center of any black hole image. In reality, it's a kind of negative image — an object defined by its absence. The curved edge of superheated gas we see defines a singularity's outer limit, the black hole's event horizon beyond which escape is impossible. The bubble of darkness that this edge abuts is the actual singularity. Next up, there's the cloud of dust and gas itself, called an accretion disk. Not all black holes have these, of course, but if we want an actual image, we've got to have something to contrast the black hole against. The accretion disk forms in somewhat the same way as Saturn's rings: matter drawn inward by the black hole's gravity begins to orbit, and it eventually flattens out into a thin disk. "It’s very common for material to flow towards the black hole in the form of a disk," says Erin Kara, a Hubble Postdoctoral Fellow at the University of Maryland. "We’ve heard that they suck everything up around them, but actually, that hot gas will preferentially rotate around the black hole first, and then over time, will fall past the event horizon — this point of no return, which causes the dark ‘shadow’ in the middle of the image."

You might also see black holes with what looks like massive beams of light coming from each side, perpendicular to the accretion disk. These are called relativistic jets, and they're made of superheated plasma ejected from the accretion disk. The jets are some of the most powerful phenomenon in the known universe; they travel at a significant portion of the speed of light and can extend for thousands of light-years from the black hole itself. Only the largest and most active black holes will create jets, though in some cases they can be quite spectacular. Quasars, hugely powerful black holes

at the centers of galaxies, can shine brighter than the entire Milky Way. Now, let's get back to the black hole boilerplate. The standard formula is usually: black sphere, glowing disk

, maybe some jets. But that's not how a black hole would truly appear to us. For a little more scientific realism, things have to start getting weird.

Let's jump to a different sort of black hole image, one brought to life by that most potent force: Hollywood movie magic. Gargantua, the black hole featured in the film "Interstellar," looks decidedly different from the black holes that typically grace science articles. The image was made with the help of theoretical physicist Kip Thorne, and it actually does a better job of depicting what a black hole might look like to someone nearby — though it's not perfect either. The obvious thing that sets Gargantua apart is the presence of what appears to be two rings, instead of just one. The dual disks are due to the extraordinarily strong pull of gravity near a black hole, so strong that it bends the path of light itself. What we're seeing is actually just a single accretion disk, warped by gravity into what looks like two. From our angle, even with the the equator, the light coming from the rear of the disk will be pulled up and over the black hole, giving the appearance of a second ring arcing above the black hole. Similarly, light coming from the bottom of the back half of the disk will be bent under the black hole and toward us.

The Baffling Simplicity of Black Holes

The image will vary depending on what angle we see the black hole from. The higher we get above the plane of the disk, for example, the smaller the ring will appear as the effect of the light bending it is weaker.

What an observer in a spacecraft would see as they fell into a black hole. The imges correspond to the points marked in the top graphic, beginning with top left. (Credit: Marck and Luminet "Plongeon dans un trou noir" In Pour La Science Hors-Série "Les Trous Noirs"; Pour La Science: Paris, France, 1997; pp. 50–56) The "Interstellar" black hole is missing an important component, though — one that director Christopher Nolan actually knew about, but chose to leave out for the sake of making a more comprehensible representation. The type of black hole that the movie shows is surrounded by a disk of material, and that material rotates about the black hole very quickly. The gas and dust is moving so fast, in fact, that the photons emerging from it would be altered by the Doppler effect. It's the same phenomenon that causes sirens to get pitched up when they're approaching and pitched down when they're moving away from us. Waves, whether of light or sound, moving toward us appear to have a higher frequency because they're squished together, and vice versa for those moving away. So, an accretion disk rotating from left to right would appear far brighter and bluer on the left side and dimmer and redder on the other. Gargantua looks equally bright on both sides (colors are often left out of black hole images), making it just a little bit wrong. A more accurate vision of a black hole with a thin accretion disk was actually created over 40 years ago, by an astrophysicist named Jean-Pierre Luminet. The drawing is based on calculations he made in 1978 with the help of an early punch-card IBM computer. Then, he took the resulting data and hand-drew the simulated black hole onto photographic negative paper with a pen and ink, and he took a negative of that to get the image below.

A rendering of a black hole drawn by hand by Jean-Pierre Luminet in 1978. (Credit: Luminet 1979) The theoretical black hole Luminet created is bright on the left and dim on the right in accordance with the Doppler effect. The back is bent up, and the bottom is almost completely invisible, obscured by the bright disk in front. The picture is strikingly similar to one created by Thorne and a few colleagues following the release of "Interstellar" to provide a more accurate depiction of what Gargantua should have looked like.

A more realistic rendering of the black hole seen in the movie "Interstellar." (Credit: Marck et al./Classical and Quantum Gravity)

The actual black hole picture we'll get from the EHT won't look like any of these pictures, in all likelihood. The resolution will be far worse, for one thing, and the parameters of two of the black holes they've looked at — Sagittarius A*

— might be different. The size and shape of the accretion disk around a black hole, the temperature of the plasma circling within it, the rate of rotation, whether the black hole itself is rotating, the angle of view and many more factors could create an image that looks different from what we've come to expect. And who knows, maybe they'll find something totally unexpected. There could be an elephant lurking within our galaxy after all.