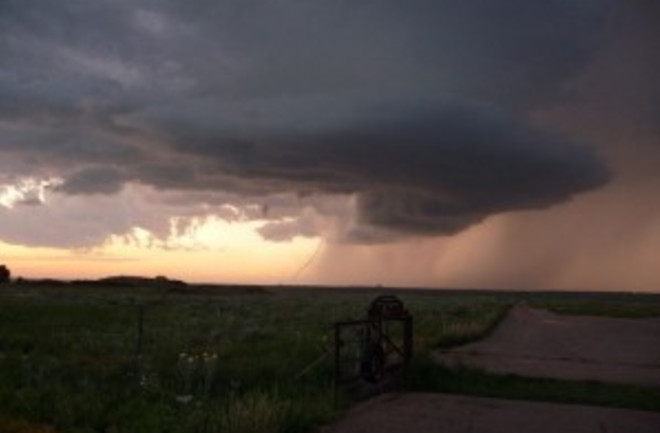 A small tornado in Kansas, photographed during Tim Samaras's lightning expedition in August 2009. Photo by George Johnson. It was a shock this morning to learn from an editor at National Geographic that Tim Samaras had been killed by a tornado in Oklahoma. Also dead were Tim's son, Paul, and Carl Young, who had long been a member of the team. I was with them all at various times while gathering information for a story on Samaras's efforts to capture the fastest video ever taken of lightning. Like tornado chasing that too was a dangerous undertaking. But as others who knew him have pointed out, Samaras was not simply a thrill seeker. He loved to come as close as possible to extreme weather, but the risks he took were calculated, educated ones. His overriding goal was to gather information -- in the form of imagery and other data -- that would add to science's understanding. Lightning strikes when two oppositely charged trails of electricity -- one descending from the sky and the other rising from the earth -- briefly come together, channeling some 30,000 amperes along their path. Specialized cameras shooting tens of thousands of frames per second weren't fast enough to capture that moment of contact, so Tim made his own, souping up a device originally designed for filming above-ground nuclear tests. With a rotating mirror spun by a helium-driven turbine, the Big Kahuna was capable of capturing as many as a million frames per second. Along with the camera and his computers, Samara's trailer was filled with monitoring equipment. The most crucial reading was the electrical charge of the air, measured in thousands of volts per meter. As it approached the danger mark, Tim would call everyone safely inside -- including Carsten Peter, the daring photographer who, year after year, spent months on the road with the crew. For me the most vivid memory was in August 2011 on top of South Baldy Peak in the Magdalena Mountains of southern New Mexico. As a violent storm shook the trailer, scientists at the Langmuir Laboratory of Atmospheric Research shot rockets into the sky. They were tethered to the ground by long metal wires, and the result was lightning that always struck in the same place -- easier to measure and photograph than lightning in the wild. Tim didn't get his long-awaited shot that day, and now he never will. For what he was seeking there were so many variables involved -- so many things that had to go right. Maybe he never would have succeeded in this particular quest. But I wish he and his son and his friend Carl -- these fine people -- had had long lives to keep trying.