Scientists hacked the machinery of cellular warfare to splice genes. Now they’ve found a way to guard against it, too. 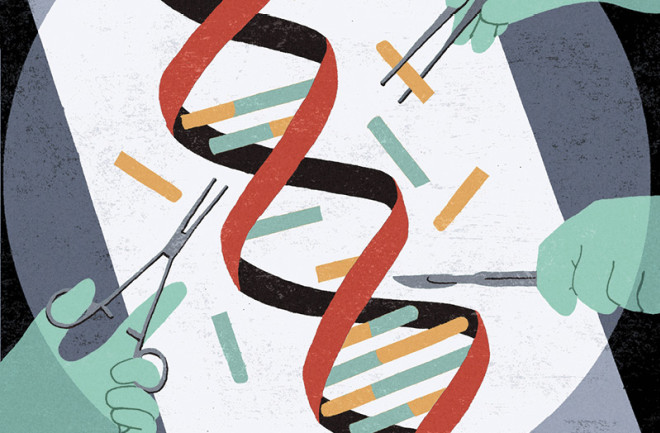 An arms race is playing out inside your body. It’s part of an invisible war that’s raged for billions of years. When viruses hunt and infect bacteria, the bacterial survivors store pieces of their vanquished foes — DNA snippets — within their genomes so that next time, they can detect and defend against the attack. In response, viruses evolve their own counterattack.

The bacteria’s natural defense system is called CRISPR-Cas9. And in 2012, biochemist Jennifer Doudna, together with French microbiologist Emmanuelle Charpentier, upended genetics with an ingenious idea. What if scientists could exploit CRISPR as a gene-editing tool? Since then, Doudna and others have hacked these cellular weapons in an effort to treat diseases and create stronger crops. Now scientists are attempting another task: avoiding unintended mutations resulting from their gene edits.

To grasp the tool’s precision, imagine the letters of a genome — G, A, T, C — typed into a stack of books dozens of stories high. A guide RNA shepherds Cas9 — which acts like a pair of DNA scissors — to the right spot, where it zooms in on just 20 letters and lets scientists change a few.

“CRISPR-Cas9 lets you find the right spot,” says Joseph Bondy-Denomy, a microbiologist at the University of California, San Francisco. “That’s a big deal.”

Indeed, a global gene editing revolution is underway. Lawyers battle over patent rights. CRISPR startups are selling stocks on the NASDAQ. And in a milestone this year, Oregon Health and Science University researchers used CRISPR to successfully correct heart disease-causing genes in human embryos. It was the first U.S. CRISPR experiment on humans.

But despite its track record, sometimes CRISPR brings unintended consequences — gene edits in undesired locations. Scientists call these “off-target effects.” Cas9’s scissors don’t always stop once the targeted cuts are made. Sometimes the scissors will roam for another day or two, cutting other sites that resemble the target but aren’t quite a perfect match.

“If left to their own devices, over time, [CRISPR proteins] might have the ability to cause trouble,” says Doudna, who is also a University of California, Berkeley, professor.

In May, a group of ophthalmologists and others sounded the alarm bells in a letter published in Nature Methods. The team used CRISPR to fix a blindness-causing gene in mice. But when they re-examined the mice, they found hundreds of unintended genetic mutations. Headlines about off-targets ensued, and CRISPR stocks tanked.

Doudna challenges the group’s methods and thinks that, in general, the off-target fear is overblown. Scientists knew about these mutations, and the technology is more than accurate enough for academic research purposes. The problems begin only as scientists move CRISPR into complex clinical trials.

Bondy-Denomy, the UCSF micro-biologist, appears to have found a “natural” way to combat these off-target effects. His research focuses on the arms race between bacteria and viruses, and last year, Bondy-Denomy started testing out a hunch. If bacteria defend against viruses using CRISPR, he reasoned, then viruses likely have a response to counteract it. He was right. Viruses do produce “anti-CRISPR” proteins that grab Cas9 and impair its gene-editing ability. He published his results in Cell in January 2017. “This is basically an off switch,” he says.

By summer, Doudna, Bondy-Denomy and their collaborators had used this viral counterpunch to reduce off-target effects. In Science Advances, the team detailed how they used CRISPR to make edits and then deployed anti-CRISPR to stop the Cas9 scissors from running amok.

The technique could help CRISPR move from the lab toward more therapeutic applications where absolute precision is required, Doudna says. Other teams are exploring different ways to avoid off-target effects, too. For example, the team that edited human embryos earlier this year saw no off-target effects, thanks to prep work aimed at keeping CRISPR on a shorter leash.

However, this gene-editing antidote could have another important use. Security experts, including former Director of National Intelligence James Clapper, worry that CRISPR makes things easier for would-be bioterrorists. Bondy-Denomy says if someone launched a CRISPR attack on humans or our crops, anti-CRISPR could work as an antidote. DARPA, the U.S. military research agency, liked the idea enough to give Doudna and Bondy-Denomy a grant to continue making Cas9 safer.

While Bondy-Denomy doubts CRISPR will ever be deployed in a human battle, he can at least be confident in knowing anti-CRISPR has already proven itself in the cellular arms race.

[This article originally appeared in print as "The CRISPR Antidote."]