The Crazy Eruptions That Spit Up Diamonds 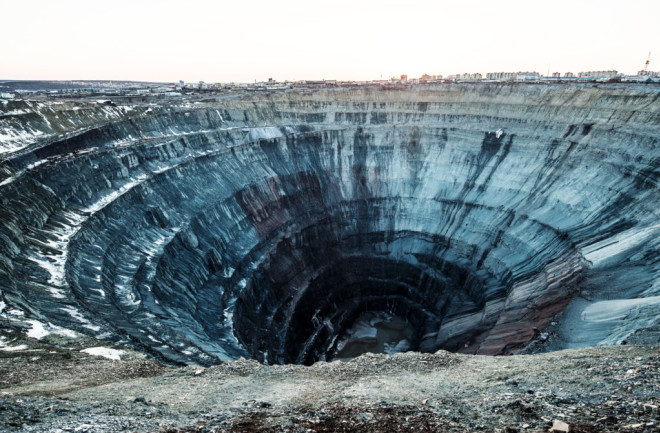 Getty Images Diamonds might not be the rarest of geologic materials, but they can be some of the most valuable. Where do we get them all? It takes extremely high pressures to reorganize carbon into diamonds---pressures higher than can easily be mimicked by humans or even created by processes within the Earth's crust. No, diamonds have to come from the Earth's mantle, hundreds of kilometers beneath our feet. But how do those diamonds get to the surface for us to collect (and sell)? The answer lies in some of the oddest and rarest volcanoes on the planet. Kimberlites are volcanic eruptions that bring material from the depths where diamonds can form. Yet, unlike many geologic processes, a kimberlite eruption could launch rocks from the mantle at over 250 kilometers an hour! Yes, you read right: Kimberlite eruptions might be rocket ships from the Earth's interior. [related/] Kimberlite magma is what geologists call "ultramafic." All that means is it is low in silica and high in magnesium (relative to other magma). What makes them cool is that they are likely coming directly from the mantle---that layer of rock beneath the Earth's crust. Even at its thickest, the crust is only ~70 kilometers thick, but the source of kimberlite magma is likely over 200 kilometers down. So, in kimberlite deposits, we find all sorts of chunks of mantle rocks and minerals, along with chunks of the crust that the kimberlite blasted through (we call these chunks "xenoliths"---foreign rocks). Kimberlites themselves are best described as "carrot-shaped," where they widen at the top and narrow at depth until they reach the dyke of magma that was the pathway from their source deep in the mantle. The tops of the pipes might be tens to hundreds of meters wide, but at depth, they are likely only a few meters across. When they erupt, they produce piles of broken volcanic debris (pyroclastic material) and the cone is filled with kimberlite breccia made from magma, xenoliths, and anything else in the way. They never have lava flows and even the debris isn't large volume, probably millions of cubic meters rather than the billions (and more) cubic meters of more typical explosive volcanic eruptions. They aren't common. Most kimberlites are found in areas of the oldest rocks on Earth known as continental cratons. There are some found outside those cratons (such as the kimberlites of Kentucky and Arkansas) but they are still typically found where the rocks are old. Geologists aren't too sure why that is, but globally, you find a lot of places where there is old crust like Canada, Brazil, Siberia, South Africa, northern China, and Australia. [related_video post_id="2036559"/] Most kimberlites are old, too, forming from the Proterozoic (between 541 million and 2.5 billion years ago) up to the Cretaceous (79-145 million years ago). However, there are a few places where geologists think youngest kimberlites may have erupted, including the Igwisi Hills in Tanzania that might be only ~10-20,000 years old and the ~30 million-year-old Kundulungu Group on the DR Congo. So, kind of like big flood basalt provinces and komatiite lavas, kimberlites seem to have been more common in the planet's past. That doesn't mean they can't happen today! What might a kimberlite eruption be like if we had one in the middle of Kentucky (or really anywhere in central North America)? This is where things get a little more speculative. Considering we've never seen a kimberlite eruption, we have to try to back out the events that happen and the timing of the eruption using clues in the rocks---like how minerals shatter, the types of material found in the deposits, and the shapes of the pipes. Really, it comes down to making, well, magmatic soda.

How to Make Diamonds

Kimberlite eruptions likely start when a carbon dioxide-rich magma forms from melting the mantle. That magma could end up with almost 20 percent carbon dioxide by weight, which is much higher than typical magma (that might be only a couple percent). This magma forms 250 kilometers below the surface and is so low in density, it begins to rise rapidly. As it rises, all the CO2 begins to come out of solution and form a tip on the rising magma. That CO2 foam sneaks into cracks and shatters the rock, allowing for more rising. Behind it follows the kimberlite magma that is still degassing at faster and faster rates, making a magmatic foam that trails the CO2 foam. Really, it is like one big magma soda bottle whose top has been popped. By the time the magma reaches the surface, the foam tip might be 2 to 4 kilometers long moving through that ~1-3 meter pipe. With all this foam rising through rocks that are under pressure, that dramatic change in stress causes the walls of the pipe to shatter, adding more material to the kimberlite magma as it rises. At times, the kimberlite magma is likely rising behind the CO2 and magma foam at 30 to 50 meters per second. That's over 100 kilometers per hour. The gas and foam? By the time it's close to the surface, it might be moving close to 300 to 600 meters per second ... over ~1,000 kilometers per hour! So, the trip from the mantle to the surface might only take one hour to get all the gas, foam and magma to the surface Now, if you're on the surface before a kimberlite eruption, this means that you won't have much in the way of signs that an eruption is going to occur. Once the process starts, you would guess that earthquakes would start to be measured from depth and rapidly rising towards the surface as the magma moves and shatters rock. You would also likely get some tremor associated with the magma moving through the pipe. However, the rapid nature of the event means that earthquakes might be the only sign until the kimberlite magma and foam is near the surface, when [totally speculative] we could notice an increase in CO2 emissions from the ground or very fast deformation of the area where the eruption will occur. Humans have never experienced at kimberlite eruption, so this would be a whole new world of monitoring and mitigation to prevent casualties if this happens under a populated area. Once the foam tip of the kimberlite magma reaches the surface, there is going to be a big explosion. All that compressed gas and magmatic foam will now expand rapidly, creating a massive jet of CO2, volcanic debris, random chunks of rock from around the vent, magma and whatever else might be in the way. Depending on how much stuff is mixed it, the plume could rise as fast as over 1 kilometer per second, so it could reach 20-30 kilometers height in a few minutes---so, think something like the eruption of Mount St. Helens in 1980. However, that rapid decompression creates a blast wave that will travel down as well as up. The wave will propagate back into the pipe at half the speed of sound, creating more degassing of the magma continuing to rise and extending the explosive eruption. At the same time, the drop in pressure in the pipe causes the walls of the pipe to start to collapse, heralding the beginning of the end. All the magma in the pipe will cool rapidly and solidify, mixing with all the debris to create the mixed up kimberlite breccia. The waves of all these decompression explosions will resonate in the pipe, making a pulsing explosive eruption. However, the whole thing would likely be over in tens of minutes as the wall collapses and the rising magma cools. The surrounding landscape would be covered in volcanic ash and debris, some made of erupting magma, some made of chunks of mantle and crust xenoliths. The deposit wouldn't likely be thick, but you could imagine anything within a few kilometers of the vent would be hit with a rain of ballistic bombs and shockwaves from the eruption. The crater might only be the size of a large sinkhole, but the halo of volcanic debris would extend tens of kilometers. (Sadly, it wouldn't rain diamonds. They mostly end up in the solidified magma in the crater or dyke beneath it). After the eruption, the crater, now filled with the porous debris of the eruption, would likely fill up and form a small crater lake. Luckily, kimberlites appear to be monogenetic---that is, they erupt once and are done. Less luckily, they tend to form in clusters, so whatever area experiences the first kimberlite eruption might expect more to come. However, the timing is unknown. Would it be in hours, days, months, years? We don't know. In the end, an eruption of a modern kimberlite would be one of the more dramatic geologic events we've experienced. In the span of what might be as little as an hour, material from the mantle would be thrown to the surface in a massive explosion that ends as fast as it started. The area around the vent would be devastated, but likely no long-lasting or wide-reaching impacts would be noticed (unless maybe a bunch of kimberlites erupted within days of each other?) Hopefully, it happens far from human populations so we can just enjoy the scientific bounty that would come from such an eruption. Just another way the Earth can make life exciting for those of us who populate the surface.