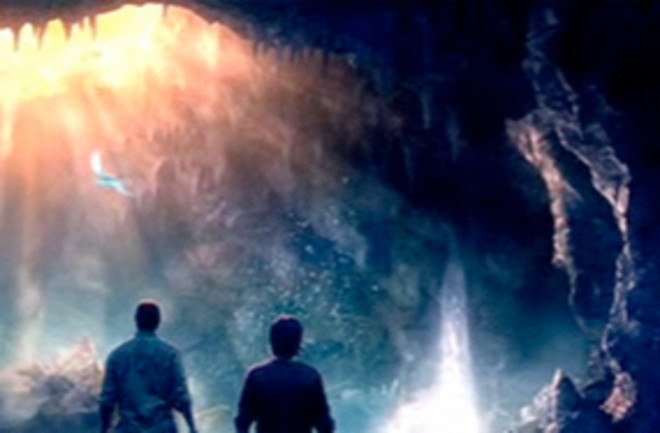 The latest cinematic version of Jules Verne's Journey to the Center of the Earth opens this Friday, staring the ever-likeable Brendan Frasier. Frasier's character, (Professor Trever Anderson), his nephew and local Icelandic guide find themselves having hair-raising adventures as they voyage through underground seas and landscapes populated with all manner of bizzare plants and animals. Verne's original book was published in 1864, a time when quite a few people took very seriously the idea that the Earth was hollow--and inhabited. In this they were inspired by a scientific proposal by Edmund Halley (of Halley's comet fame) that turned out to be not completely off the mark.

As described by David Standish in his entertaining book Hollow Earth: The Long and Curious History of Imagining Strange Lands, Fantastical Creatures, Advanced Civilizations, and Marvelous Machines Below the Earth’s Surface, before Halley, most people assumed that the Earth underfoot was pretty much solid rock all the way through, with some lava and water thrown for good measure. In the late 17th century, Halley was interesed in observations that showed that the Earth's magnetic poles wandered around. To explain this motion, Halley suggested that the Earth wasn't solid, but instead composed of a series of concentric shells. One or more of these shells produced the Earth's magnetic field, and its movement relative to our, outermost, shell resulted in the changes to the position of the magentic poles. Halley further went on to suggest that each of these shells could be inhabited.

The "inhabited" notion went on to provoke quite a bit of science fiction, as well as some real attempts to find an entrance to these inner worlds and get at their postulated wealth, but otherwise turned out to be a dud. But Halley's basic idea that the Earth wasn't a homogenous block of rock, but instead had a structure in the form of moving concentric spherical shells, ultimately did find expression in our modern understanding of Earth.

We now know our planet is composed of a thin outer crust wrapped around a thick mantle, which is in turn wrapped around a liquid outer core of molten rock, at the heart of which is the Earth's solid inner core. Circulating electrical currents within the outer core gives rise to the Earth's magnetic field and are responsible for the slow motion of the magnetic poles. It's also believed that Earth's inner core is "superrotating" -- that is, turning faster on the Earth's axis than the surface--and this rotation may also play a part in maintaining Earth's maganetic field. So while the movie may be pure fantasy, its worth remembering a time when even the suggestion that we could really know what the center of the Earth is like was a fantastic thought.