The Complicated History of Planets Around Barnard’s Star 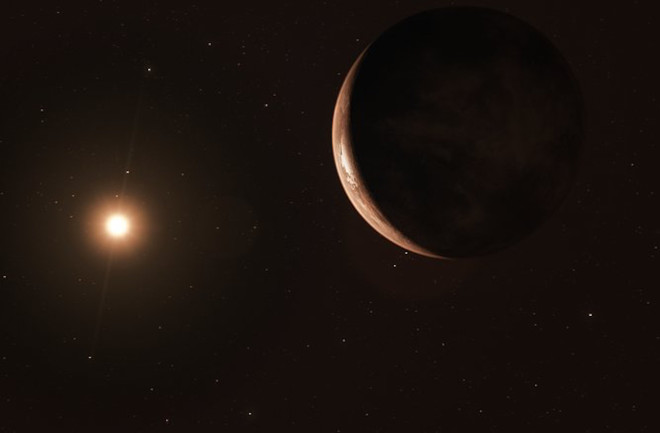 The image shows an artist’s impression of Barnard's star b and its dim host star. (Credit: ESO/M. Kornmesser)

Perhaps no other star system has elicited so much wonder, mystery and frustration as Barnard’s Star.

Astronomers announced last Wednesday they’d discovered a planet in its thrall weighing in at around three Earth-masses, with a frigid, 233-day orbit. The find finally answers whether we have any planetary neighbors in the second-closest system to Earth (after Alpha Centauri).

This follows more than 50 years of scrutinizing the star, and coming up empty. A 1999 study ruled out any gas giants at Barnard’s Star. A 2003 study ruled out close-in Neptune-like worlds. A 2013 study found nothing larger than Neptune anywhere close to the star — and, like the recent study, it ruled out anything in the habitable zone (the possible orbits that allow for liquid water — and, therefore, life as we know it).

Is the new planet at Barnard’s star habitable? Don’t get your hopes up.

Why so much scrutiny for this one star? It’s because we’ve thought that Barnard’s Star has had a planet in tow for almost 55 years — depending on who you ask. When astronomer Peter van de Kamp of Swarthmore College claimed he’d found a planet around Barnard’s Star, people believed him.

Before shaking up the astronomical establishment, van de Kamp’s research interests were traditional. For years he sought “invisible companions,” small stars drowned out by the light of larger stars they orbited. But letters show that, as early as 1940, he was also looking for planet-like bodies. Just 15 years later he was already giving talks to astronomy groups on the topic of “Do Stars Have Planets?”

By 1960, when van de Kamp announced he’d found his first planet at a star named Lalande 21185, his search of Barnard’s Star was already an open secret. (This was also the year that Project Ozma began looking for alien radio signals in the first-ever SETI experiment, which the press at the time connected directly to the hunt for alien planets.)

The stage was set in 1963 for van de Kamp’s biggest announcement yet: A gas giant, dubbed Barnard’s Star B, orbiting that star every 25 years. He detected it by analyzing tiny movements in Barnard’s Star, the pushes and pulls of the planet’s gravity tugging at the star as it orbited. Both planet and discoverer became celebrities: Science News called the world a “dark, lifeless giant,” and van de Kamp appeared in the pages of Esquire, newspapers across the country and even a film series hosted by science host Mr. Wizard.

More planetary discoveries followed, culminating in a planetary sequel, Barnard’s Star B2. Van de Kamp took a look at his data again in 1969 and realized there were not one, but two gas giants orbiting the star, with the “new” one weighing in at 0.8 Jupiter-masses and circling in a 12-year orbit. Barnard’s Star was getting crowded! (One subsequent paper, by a group of outside researchers, claimed as many as five planets orbited the star.)

There was just one problem: These worlds weren’t real.

In the early 1970s, a decade after the discovery of Barnard’s Star B, Allegheny Observatory astronomer George Gatewood took a closer look at the data. While van de Kamp saw Barnard’s Star shift at periodic intervals in the photographic plates of observations, which supposedly betrayed the planets’ presence, Gatewood saw … nothing.

He corroborated his findings with multiple instruments but couldn’t replicate van de Kamp’s conclusions. Further analysis revealed that another of van de Kamp’s planetary finds had an identical change in motion as Barnard’s Star, a clear sign that the planetary “discovery” was most likely an instrumental problem.

Van de Kamp’s colleague at Swarthmore, Wulff Heintz, published a paper backing up Gatewood’s research in 1976, straining a department already bursting at the seams with internal conflict over Gatewood’s findings.

It was too much, and van de Kamp retired from the college in 1976 — but he continued to publish papers defending his claims until the 1980s. This includes a 1986 paper in the journal Space Science Reviews that read as a short book on invisible planets and included religious iconography. It didn’t work.

The scientific consensus ever since has been that Barnard’s Star B and B2 don’t exist, and never did.

But even now, van de Kamp’s claims cast a long shadow over planetary science. When the team behind last week’s discovery found something in the data that could be a planet in a similar orbit to Barnard’s Star B2, they at least had to mention the link. “I’m very cautious making this link between the variability we see and the presence of a planet,” says Ignasi Ribas, lead author of the paper.

At least for now, there’s one strong candidate there. Countless fruitless quests for a planet at Barnard’s Star have finally led us from gas giants to a cold, large and probably rocky planet.

The new world may be colder and much smaller than anything van de Kamp envisioned, but we’ve finally found strong evidence for at least one planet around the second-closest star system to us. It only took half a century.