The Chronicles of a Campus Security Guard During COVID

COVID-19 brought on new threats and challenges for university science lab security, as told by a guard in this first-person account. 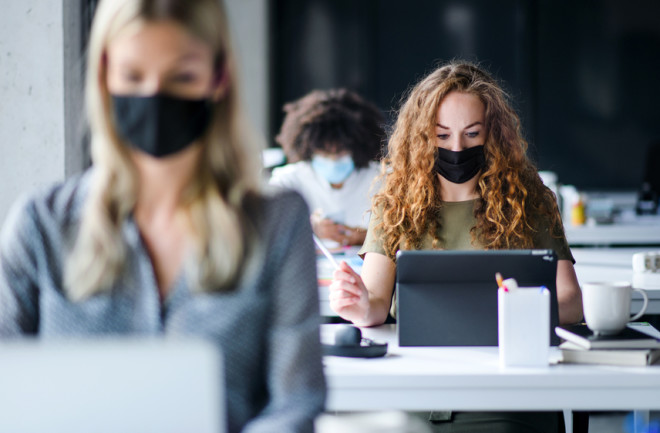 It was a Sunday dawn when we noticed an image of a penis had been painted on the gate opposite the labs. As a campus security guard in the U.K., I’ve read the manual on acts of intimidation against university researchers — even if the methods are juvenile at best. But I’m pretty sure this graffiti wasn’t an anti-science gesture — particularly as there was no research currently taking place.

“Penisgate” happened was during the first lockdown in the U.K., which means we had already sealed university entrances. My gut told me that one of the local residents (who conveniently use our grounds as a shortcut to the city center) had objected to this measure. Their revenge? Open a paint can. After 10 minutes trying to remove their handiwork with a bolster, my eyes fell on the shuttered science building. “Solvents,” I thought.

Using my master keys, I opened the front door and carried out a quick visual check of the chemistry labs to ensure everything was in good order. Then, I sought out the first cabinet I could find that was covered in chemical hazard stickers. Bingo: I was greeted by a jar of ammonium nitrate, which made me reverse swiftly. I didn’t want to break the Sunday quiet with a 1.1 kiloton explosion.

Working in security, you get used to the absence of other people. Our hours are long, and while guards at the university are never short of duties to perform — patrolling the grounds, checking padlocks are secure, reporting and responding to medical and fire hazards — it can sometimes be hard to stay motivated as the minutes crawl by on a quiet Sunday shift.

Being on duty throughout the various lockdowns in the U.K. has felt like working a thousand Sundays back to back. Fortunately, we were never alone. Contractors were on site, piecing together a new medical and engineering building under direction from university science technicians. In fact, the "lab rats" were the first staff we saw return to campus during the March 2020 wave of coronavirus cases: they were using the 3D printing facilities to produce face masks.

As the contractors completed the second fix on the new engineering building, my attention shifted from dropped tools and loose cables to the fire doors, the spill kits, the gas cages, and the hundred-plus windows. As guards, we are responsible for locking down buildings. But I feared how long this new facility would take to secure.

Before this facility was opened, security’s science training could be described as basic at best. We were aware of wash station locations in case lab users reported an eye injury, and we kept bottles of Diphoterine stored in our control room in case of an acid attack. We’ve been lucky so far, but per capita, the UK has one of the highest rates of these assaults in the world.

Then we were trained on the layout of new science and medical suites. As guards are on site 24/7, we’re the first to respond to all emergencies. We were shown how to operate laboratory kill switches, the correct way to respond to a liquid nitrogen leak, and the differences in reacting to CO2 and nitrogen escapes (I didn’t realize the differing weight of the gases could affect evacuation protocol).

First aid refresher courses have always been a reassurance: they keep us aware of the flush times for various burns (ten minutes for electrical, 20 minutes for chemical). Those are a far more common injury on campus. One of the most serious accidents I dealt with involved a male sports science student who fell up the stairs onto his caramel latte. With superficial burns covering more than 5 percent of his body, we were required to call an ambulance. By the time paramedics got to him, he was being sponged by his classmates.

Guarding the campus anatomy suite — which contains human tissue, and is used to teach everything from dissection to Thiel embalming — has been especially challenging. Not least because we’re not allowed in it: access is restricted to students and appropriate medical staff only. This makes us fear a fire alarm activating at 3am when the university is deserted. Luckily, lab managers have assured us that an auto-alerter system will contact them so they can advise and respond. Hopefully they’re faster than grouchy local residents, who don’t appreciate students making loud noises after dark, and often panic if they see an influx of white coats.

Encounters with prank-playing science undergraduates can be testing, but we missed them when lockdown emptied the campus last year. There were no students in goggles hunched over bubbling flasks. There was no-one to compete with security’s ability to covertly rearrange display skeletons.

Since England declared Freedom Day, more science support staff have been returning to campus. They’ve replaced locks to external hydroponic labs, which during the quieter months were targeted by thieves with designs on the ultraviolet lighting, no doubt to boost plant fertility in a grow lab of their own (cannabis remains an illegal Class B drug in Britain).

As we patrol the new medical block, we’re conscious of protecting the next generation of radiologists and research chemists. The COVID-19 pandemic forced security and scientists to become better acquainted, with guards realizing the eggheads work as late around the clock as we do.

Perhaps one day I’ll get to impress them with that one line of the periodic table I’ve had memorized from a school chemistry test. Until then, security have only one humble request for the future Einsteins, Franklins, Aristotles and Curies: please don’t experiment while wearing earbuds. It makes it harder for you to notice that your analysis project has activated the fire alarm.