The Chemistry of . . . Photography

Focus! Long bound by conventional theory, film is set to take a quantum leap in resolution

Has anyone changed the world as utterly and gotten as little credit for it as Joseph-Nicéphore Niépce? People with any notion at all of who invented photography usually think it was that other Frenchman, Daguerre— he of the daguerreotype— but Daguerre got the idea from Niépce. Niépce's camera was a cubical wooden box, about a foot on a side; his film was a tin or stone plate coated with asphalt, which hardened where the light struck it. With this unlikely apparatus Niépce took the world's first photographs, in 1824, from a window of his manor house in Burgundy, at a time when Daguerre was still painting theater sets. The results, judging from the one image that survives, were surprisingly sharp: Far across the courtyard, behind the dovecote, you can make out a pear tree with a gap in its foliage. "Even though it was asphalt, it's still the ancestor of all the processes we use today," says Jacqueline Belloni, a physical chemist at the University of Paris-South at Orsay. "Everything was already there." That makes photographic film sound a bit like a Flintstones relic, what with cameras going digital and darkrooms giving way to computers. Far from it: Even a $10 single-use camera offers 10 times better resolution than today's $1,000 digital— and thanks to Belloni, that gap is likely to widen. In the late 1980s, Belloni helped elucidate the fundamental chemistry of film developing. Now she has developed a new method of "doping" film emulsions that promises to make them five times better at capturing light. "If it can be widely applied," says chemist Rolf Steiger of Ilford, a film manufacturer, "it will certainly be one of the greatest inventions in photography in the last 60 years." Ever since Daguerre (give him credit too), the crucial light-sensitive material in photography has been silver halide. Film is basically a lot of silver halide crystals suspended in gelatin on a plastic backing. When a camera's shutter opens, light photons stream through the lens, fall on some of the crystals, and dislodge electrons from the halide ions. Some of the electrons glom onto nearby ions of silver, converting them to neutral atoms. The atoms then cluster together, forming a tiny black speck of metallic silver on each exposed crystal. Millions of such specks form the image. But to make the image visible, even to a microscope, a photographer has to wash the film in a chemical developer (another contribution of Daguerre's), which finishes the work the light started. 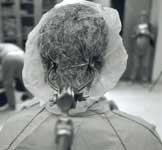 "The developer gives electrons to those crystals that want them the most, and not to the others," Belloni says. If a silver halide crystal already has a light-blackened cluster containing a critical minimum of silver atoms— four, typically— that cluster's electric field draws electrons to the silver ions around it, and the whole billion-ion crystal is quickly blackened. All the other crystals, unexposed or barely exposed, the developer leaves alone; the crystals react individually because the gelatin isolates them from one another.The result, after the undeveloped crystals are washed away, is a black-and-white negative image: Bright areas of the subject produce concentrations of black crystals; dark areas become transparent. There are 10 billion crystals in a frame of ordinary film— the equivalent of 20 million digital pixels. (Even today's sharpest digital images have only 2 million pixels.) To make a positive print, you shine a light through the negative onto a paper covered with the same kind of film emulsion, and then develop that. Color film is more complicated. It's a stack of silver halide emulsions, each designed to record red, green, or blue. But the first step— light striking a silver halide crystal and creating silver atoms— is always the same. "The first step determines everything— how much information you capture," says Jon Kapecki, a chemist at Kodak. "There's nothing you can do afterward to change that. You can use the information, or you can squander it." Most photons that strike film are squandered: The electrons they liberate, one electron per photon, fall right back into the "holes" in the halide ions. Film today thus requires 10 or more photons to make its quota of four silver atoms per crystal— that is, it wastes 60 percent of the light. "So when we managed to catch all the light," Belloni says, "and even to double it— that made an impression on people." 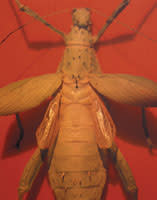 Since the problem was holes gobbling up light-generated electrons, Belloni reasoned, the solution was to dope the film with a hole-gobbler. The dopant would have to be a negatively charged ion, like a halide, so it could substitute for a halide in the crystal lattice. To neutralize a hole it would have to be willing to give up an electron, but not too eager, or else it would start neutralizing silver ions and blackening film that was still in the box. Belloni figured that formate ions— chemical formula: HCO-2— would work. It was an inspired hunch. Experiments done by René De Keyzer, a chemist at Agfa-Gevaert, the German-Belgian firm that helps fund Belloni's research, showed that formate scavenges all the holes produced by light in a silver bromide emulsion. Moreover, each time a formate ion neutralizes a hole, the reaction releases a second electron that darkens a second silver ion. Instead of requiring 10 photons to expose a silver halide crystal, or four, or even three— the previous theoretical limit— a crystal doped with formate does the job with just two. Less than one part per million formate is enough. "It's really a wonderful thing," Ilford's Rolf Steiger says. One of the most wonderful benefits to consumers will be high-speed films that are much less grainy. In order to catch 10 photons per crystal in poorer light, today's ASA 400 films must have crystals four times larger— and correspondingly less numerous— than those in ASA 100 film. If formate can reduce the photon requirement to two, then ASA 400 film could have smaller crystals and better resolution than ASA 100 does today. Single-use cameras, which are loaded with ASA 800 because their cheap lenses scatter so many photons, will improve even more strikingly, giving millions of vacationers sharper, more easily enlargeable memories to take home. De Keyzer and his colleagues at Agfa have yet to prove that formate-doped emulsions will have a reasonable shelf life, that they can be manufactured on an industrial scale, and that formate will work well with all the silver halides used in photography. But De Keyzer is optimistic: He predicts Agfa will have doped films on the market within four years. And Belloni doubts formate will be the last word in film-doping. "It's probable we could push this farther by combining formate with something else," she says. "But we've opened a door no one had opened before."

Quantum chemistry and some fancy crystallography were needed to open that door— which puts it a long way from Joseph-Nicéphore Niépce's window and from the incredible moment he must have lived in September 1824, when he removed his slab of asphalt-coated stone from his wooden camera, rinsed it in lavender oil to wash away the asphalt that had not hardened, and held it up to have a look. "The image of the objects appears there with an astonishing clearness and faithfulness, down to the minutest details and the most delicate of nuances," he wrote to his brother Claude that month, according to a recent biography by Belloni's colleague Jean-Louis Marignier. "I can tell you, my dear friend, that there is truly something magical about it." A decade ago Belloni and Marignier went to visit Niépce's old house, which stands between railway tracks and a busy highway south of Chalon-sur-Sa™ne and is identified only by a well-concealed plaque. They went up to the second-floor room Niépce had used as a laboratory; they looked out the window his camera had looked out, south over the courtyard and the park beyond. Only one of the photographs Niépce made from that window survives. It shows an amusing peculiarity: The facades on opposite sides of the courtyard, one facing east and one facing west, are both illuminated by direct sunlight. Niépce's asphalt was so profligate with light that he had to expose it for a full day or even two; cloudy days and winter defeated him entirely. Film emulsions today are a million times better at capturing photons— but as Belloni has shown, they still have a long way to go.

The Gernsheim Collection at the University of Texas at Austin has an overview of Niépce's life and work. Barbara London's classic Photography, Addison-Wesley Publishers, 1976, is now in its sixth edition and has a companion.

The SciencesPhysicists Discover Why This Bubble Solution Makes Monster Bubbles