The Case Against Dark Matter

Some physicists still aren't buying it. 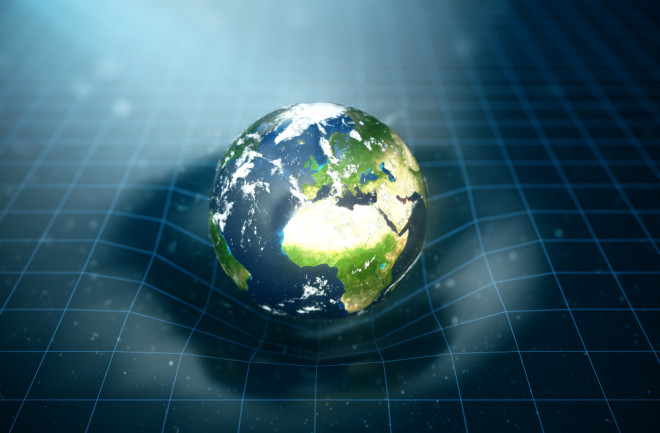 Albert Einstein’s theory of general relativity is just over 100 years old, and so far it has predicted the interaction between celestial objects and the space-time field very well. There are a few troublesome spots, however, in which the theory of general relativity doesn’t agree with quantum mechanics. These gaps have confounded researchers for decades, and have sprouted a handful of hypotheses attempting to explain the dissonance.

Dark matter and dark energy are the prevailing stand-in answers for this problem, but they are, as of yet, merely stand-ins. And there are some physicists that do not buy into these explanations. Erik Verlinde, a professor of science mathematics, and informatics at the University of Amsterdam, is one of them. He’s developing a theory that takes another look at the mechanics of gravity, and it seems to have struck a nerve in the world of physics.

“Emergent gravity,” as Verlinde calls it, is the idea that gravity is not a fundamental governance of our universe, but instead a reaction to the makeup of a given environment. Rather than thinking of gravity as a fundamental force, something that “just is,” is it possible that gravity is actually the result of the positions of quantum bodies, similar to the way temperature is derived from the motions of individual particles?

Verlinde focuses on quantum interactions to explain the dissonance between general relativity and quantum theories. His theory has a long way to go before completion, but so far it has held up well and has made some strong arguments, particularly against the idea of dark matter.

Physicists are painfully aware of the fact that spiral galaxies are spinning faster than they should be, given the amount of matter — and therefore, gravity — they contain. At the speed that some of them are spinning, current theory says that the stars, planets, dust, and other matter should be flung off into space. Because they are not, physicists have hypothesized that “dark matter” we cannot see or otherwise detect is causing the extra gravitational pull, keeping these galaxies together. This matter is said to account for about 25 percent of the universe, but Verlinde believes that there may be another answer that can account for the deviations between the expected and observed rotation curves.“What is observed is that the deviations that we see in the rotational curves of galaxies, which is just derived by looking at the matter that we see, always seems to occur at one particular acceleration,” he says.

That particular acceleration happens to play an important role in the relationship between a galaxy’s distance and the speed with which it’s moving away from our own, which is governed by the expansion of the universe, known as Hubble’s Law. A 2017 paper by Alexandre Chaloum Elbeze in the Journal of Modern Physics outlines how the expansion rate of the universe, or H0, is linked through a new parameter, which he calls E0, is linked to the rotation curves of galaxies measured by astronomers.

The rotation curve of the galaxy M33 shows the rotational velocity of the galaxy as a function of distance from the center. The measured values clearly deviate from the expected curve, if the only matter in the galaxy were the visible matter in the disk. Thus, astronomers have long posited that additional material, dubbed dark matter, is responsible for the curve. (Credit: Wikimedia Commons)

Verlinde believes that this is an indication that he is on to something.

“That fact kind of hints that it has something to do with the Hubble expansion [of the universe], which at present is due to the presence of dark energy,” he says.

The Hubble constant describes the observed accelerating expansion of the universe. This acceleration is unexplained, but has been attributed to “dark energy,” which Verlinde says can be used to explain away the idea of dark matter.

“Dark energy is quite an important part of my theory,” Verlinde says. “I don’t do away with everything that’s called ‘dark,’ I just explain what is what we now call ‘dark matter’ by thinking about what the influence of dark energy would be, and that [dark energy] actually gives the same effect.”

It should be noted that Verlinde is tackling the problem with dark matter from a specific point of view as a string theorist and is working to fit it into that perspective. Mark Van Raamsdonk, a professor of physics at the University of British Columbia, says that this method should be approached with caution.

“This possibility is intriguing, but as far as I’m aware, it’s not based on a precise model that is mathematically consistent,” Van Raamsdonk says. “Rather, he’s using his intuition to piece together a set of ideas and provide a story for how things might work. He is a very accomplished physicist, so I think his intuition is worth paying attention to.”

So far, the ideas that Verlinde confidently stand by have proven to be mathematically and observationally valid — at least, as far as galaxy rotation curves go. The real project will be building a theory that describes more than the rotation of galaxies. Sabine Hossenfelder, a research fellow at the Frankfurt Institute for Advanced Studies, says that a major challenge will be describing the evolution of the early universe.

Currently, theories that incorporate particle dark matter correctly predict the observed temperature variations in the cosmic microwave background. “Unfortunately, Verlinde’s emergent gravity model does not allow the necessary analysis [to prove its validity] — at least not yet,” she wrote in a Forbes article.

Verlinde is aware of the young theory’s shortcomings, but is confident that he can address them in the future.

“I only focused mostly on trying to explain these rotation curves, but dark matter has been used in many other parts of trying to understand the early universe,” Verlinde says. “I have to develop an explanation of how galaxies form, but also these fluctuations in what we see in the cosmic microwave background. If I want to describe the evolution of the universe, I have to calculate much more what is happening on longer timescales. That is the next step for me.”

Pitching this idea around the world has been quite a task for Verlinde. Given that the idea goes so strongly against popular belief, he has only a handful of allies even amongst his own teammates.

“I have to sell my ideas to various audiences, not just to cosmologists and people that are dealing with dark matter in other ways, but also my string theory colleagues,” he says.  “I think people are slowly starting to see the advantages of the logic of my reasoning.”

“There is a lot of work still to be done, but I think this is a better theory than to just assume that there is dark matter. Because if dark matter has so many forms in which people can imagine it’s there, and there are a zoo of those theories and nobody really knows which one it is, maybe all of those are wrong indeed.”

Regardless of how Verlinde’s theory fares overall in the pursuit of understanding, the outcome has some exciting prospects.

“In any case, trying to understand the implications of these new connections between gravity and [quantum] entanglement, is very exciting and many of us are working hard to see where this will lead,” Van Raamsdonk says. “Even if Verlinde’s specific explanation for dark matter doesn’t turn out to be correct, we are already learning new things about gravity and black holes, and I’m optimistic that we will learn something exciting about cosmology, dark energy, or the Big Bang.”