The Care and Feeding of Astronauts 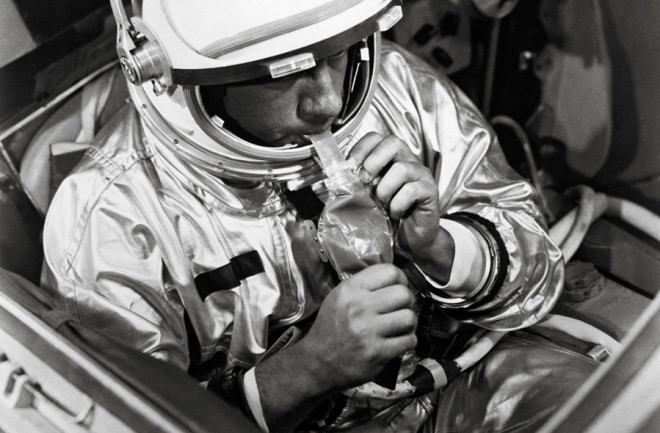 William Pogue had made an interesting — if somewhat distasteful — personal discovery. The astronaut, who piloted the third and final manned mission to the Skylab space station in November 1973, experienced a phenomenon known as a wet burp. You may laugh (or wrinkle your nose in disgust), but in space, a wet burp is no joke.

As it turns out, an environment of near-weightlessness doesn’t allow the contents of your stomach to settle out by weight as they would on Earth. Gas, liquids and solids bump against the esophageal sphincter, the ring of muscular tissue that separates the esophagus from the stomach.

“The sphincter is gravity-assisted; it’s not a total closure,” says Vickie Kloeris, manager of the International Space Station’s food systems as well as NASA’s Space Food Systems Laboratory at Johnson Space Center in Houston. And if you belch in space, there could be some backflow.

Mercury hero John Glenn dined on applesauce in a tube.NASA

In the confines of a space vehicle, that could be messy, even troublesome. Unless the astronaut can keep the mouth closed and reswallow that backflow — which Pogue heroically managed to do — any liquids or solids ejected during a wet burp could conceivably float off and lodge in sensitive instruments. Kloeris says this isn’t a huge concern, but back on Skylab, Pogue was worried enough — or possibly just grossed out — by this prospect that he limited his belches to just two during his entire 84-day mission.

Well before Pogue learned he could never trust a burp, others had struggled with more rudimentary issues: Did humans even have the ability to eat or drink in space? Would they be able to swallow without gravity? Could food make the necessary transit through the entire gut for nutrients to be properly absorbed?

In April 1961, Yuri Gagarin, the first human in space, began to put those questions to the test while orbiting the Earth aboard the Soviet Union’s Vostok 1. He squeezed two toothpaste-like tubes of pureed meat and one of chocolate into his mouth (presumably not at the same time) and swallowed hard. It worked.

On this side of the Cold War, it took almost a year for Project Mercury to seat an American astronaut at an extraterrestrial table. When John Glenn blasted off in Friendship 7 in February 1962, he was provisioned with tubes of pureed beef and vegetables, applesauce and, yes, powdered envelopes of Tang. (Contrary to common belief, Tang wasn’t invented by NASA. General Foods had been serving it to earthbound drinkers since 1957. It’s now owned by Kraft.)

On Skylab, meal trays each contained heating elements for prepping individual food packets from a menu of over 72 items.NASA

So swallowing proved not to be entirely dependent on gravity. And thankfully, the pythonlike digestive process of peristalsis, which moves food and drink along in wavelike contractions from first swallow to final farewell, was likewise unimpeded by a zero-gravity environment. With that uncertainty dispelled, the astronauts of the remaining few years of Project Mercury continued to grimace their way through more such food in tubes.

In the mid-1960s, food didn’t get a whole lot better for Project Gemini, which focused on the longer missions necessary to test the skills and equipment needed to get to the moon. If Mercury’s food had been defined by a tube, Gemini’s was characterized by a pouch. Forget faint praise; this straightforward description from the Smithsonian National Air and Space Museum damns it best: “Dehydrated, freeze-dried, and bite-sized foods, coated with gelatin or oil to prevent crumbling.”

Gemini-style pouches epitomize the food many people still associate with space travel, thanks to the inexplicable popularity of freeze-dried astronaut ice cream, ever a hit among kids passing through museum gift shops. In actuality, those dried foam cubes made it into space only once before being abandoned because of their grotesque texture and ill flavor.

The Gemini mission also clearly illustrated something prison administrators and ship captains have known for a long time: People confined to small spaces for extended periods focus with near-obsession on the quality, quantity and variety of food. A riotous insurrection of sorts even broke out over food that the astronauts almost universally despised. When Gemini 3 commander Gus Grissom entered space in March 1965, he was one of the most vocal and persistent critics of the space-cowboy chow.

Unknown to anyone else, his co-pilot John Young had hatched a sly plan to remedy the situation. Shortly after the two settled into Earth orbit, Young reached into a spacesuit pocket and grinned at Grissom. “You care for a corned beef sandwich, skipper?” he asked as he handed over a smuggled surprise. A delighted Grissom happily tore off a few bites before he had to abandon the sandwich because of the cloud of floating rye bread bits it caused.

Few were laughing on the ground. Congress hastily convened a hearing to determine if the stowaway sandwich and its crumbs presented any risk to the fledgling space program — the nation’s crown jewel in the 1960s — and its craft. After hangdog NASA handlers promised it wouldn’t happen again, no further action was taken against Young or Grissom for their deli devilry.

By the time the Apollo 11 mission was on the launchpad for its historic trip to the lunar surface in July 1969, we may have figured out how to send a man to the moon, but we hadn’t yet figured out how to send good food with him. Instead of being forced to rely on Gemini’s cold freeze-dried foodstuffs, Apollo astronauts were forced to rely on hot freeze-dried foodstuffs. This included a breakfast item memorably described by one of its testers as “coarse granulated rubber with a sausage flavor.”

A food rehydrator on the ISS.NASA

Although their caloric intake was upped 300 calories to 2,800 per day, Apollo astronauts continued to have the same worrisome issue as the earlier astronauts who spent more than a day or two in space: They ate so little, they lost significant weight. That’s bad news if you want to be able to leave Earth for extended periods — and NASA did.

Houston, We Had a Problem

Faced with near-universal dissatisfaction, post-Apollo planners knew they had real difficulties to address before they sent astronauts to the first American space station, Skylab. The planned missions of one to three months would be in jeopardy if crews couldn’t tolerate the food for that period of time.

Even though it hosted only nine people — in three crews of three astronauts each — between its launch in 1973 and its flaming, uncontrolled atmospheric re-entry in 1979, Skylab had the most diner-friendly food system yet. Its menu of 72 items included frozen and refrigerated foods, something never replicated before or since. Pogue’s gastric dilemma notwithstanding, Skylab’s dietary improvements worked. For the first time, astronauts did not return to Earth weighing less than when they left.

The experiences on Skylab continue to inform the way crew members eat aboard the International Space Station, which has been continuously occupied by up to six people at a time since November 2000. And those experiences also illuminated the daunting challenges facing those who hope to send humans to Mars, says Kloeris. “Menu fatigue remains a real problem that could degrade crew performance on a Mars mission,” she says.

Aboard the ISS, astronauts like Koichi Wakata enjoy a range of food choices to avoid the dreaded “menu fatigue” that plagued earlier explorers.NASA

But there are logistical challenges to overcome as well. A mission to Mars could require as much as 3,000 pounds of food per person, all of which needs to have a shelf life of around five years. “We can make food that will last that long,” Kloeris says. “The challenge is what the quality of the food will be.”

But what happens after the crew eats that food? Kloeris allows that astronauts shouldn’t expect to hold in a belch for an entire mission on the ISS, let alone to the Red Planet. But NASA has no formal procedure or position on the matter, and the problem isn’t usually discussed by astronauts during post-mission debriefings, Kloeris notes.

“It’s not brought up often, so to speak,” she says. Like Pogue (and no doubt many other astronauts after him), at some point they’ll likely have to grit their teeth, swallow hard and get back to work.