The Carbon Map and Data Visualization

How best to represent data is a question that physicists spend a lot of time thinking about. While theorists like myself are not the primary examples of this, I do find it striking when I stumble upon an example of data visualization that gets the pertinent facts across in a significantly clearer way than I've seen before. For a terrific example of this, see the Carbon Map. The idea of Cartograms has been around for a while, of course, and in particular, I recall them being used extensively here in the US to represent the voting tendencies of regions of the country in the lead up to the 2008 presidential election. For example, here's one in which the sizes of counties have been rescaled according to their population. 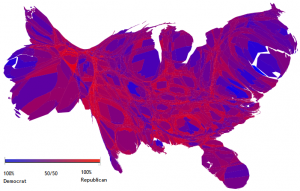 What is nice about the Carbon Map is that it is an animated cartogram, in which one can choose different datasets and have the world map dynamically rescale to represent the new data. The screen shot below is of the scaling of areas by population, but as you can see there are other possibilities. 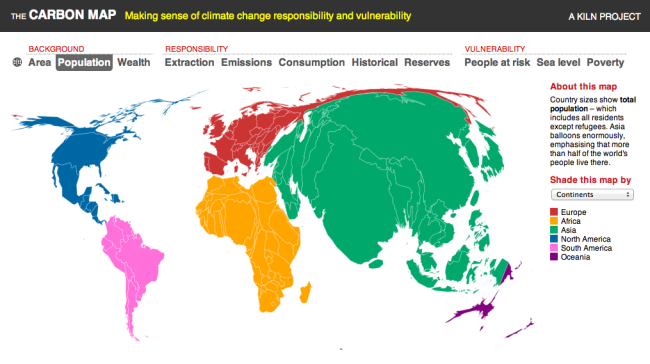 Obviously, this example (the first I've seen) is meant to get across a particular point, but that isn't what I'm discussing here. What impressed me is the clarity and power of representing the data in this way. I'm sure there are many other ways in which this technique would be useful, some of them in physics and astronomy.