The Biggest Bang of the 20th Century: The 1912 Eruption of Novarupta in Alaska 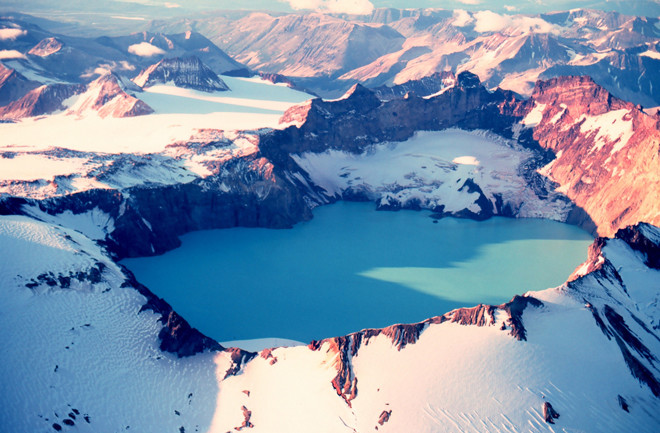 Today (June 6) marks the 100th anniversary of the largest eruption of the 20th century, yet many people have never even heard its name. In fact, the name was wrong for almost half a century! What is known as the Novarupta or Katmai eruption of 1912 was huge - ejecting almost 30 cubic kilometers of ash and debris into the atmosphere or along the ground as pyroclastic flows. That represents ~13 cubic kilometers of magma (once you correct for all the air in ash) erupted over the course of ~60 hours. That is a rate of nearly 220 million cubic meters per hour, which is roughly 520 million tonnes per hour - or to put it another way, that is ~5,300 Nimitz-class aircraft carriers per hour. Now that is an eruption!

Now, I'm not going to go through the blow-by-blow of the Novarupta eruption. For that, check out the great timeline put together by the Alaska Volcano Observatory. If you want even more depth than that, you can download a brand new and free USGS report (all 278 pages of it) on the eruption put together by Wes Hildreth and Judy Fierstein (see references below). Instead, I'm going to focus on why this eruption was so monumental from a volcanologic and petrologic (the study of magma) point of view. It might have taken nearly a century, but we learned a lot about the plumbing of subvolcanic magmatic systems, the emplacement of large ash flows and the dynamics of magma mixing from this eruption - and there is still plenty to learn from the landmark event. Facts about the eruption Before we jump into that, some fun facts to get yourself familiarized from the eruption:

To give you a sense of context, the eruption was centered in the Katmai Cluster (see above), a group of volcanoes within 15 km of Novarupta, including Griggs, Trident, Katmai, Mageik and Martin. All of these volcanoes have been active in the Holocene (last 10,000 years), but only one (Katmai) has produced a rhyolite eruption like what started at Novarupta. In fact, Novarupta itself didn't exist prior to the 1912 eruption. For almost 65 years after the eruption, it was thought that the main vent for the ash was Katmai - and who wouldn't thanks to the 5.5 cubic kilometer caldera that formed at the summit of the volcano during the 1912 eruption. However, that caldera was one of the biggest red herrings in the history of geology (more on that later). Since the 1912 eruption, only minor eruptions have occurred in the region - two small domes that plugged the vent at Novarupta, a small dome in the Katmai caldera and lava flows from Southwest Trident (see bottom image) as recently as 1974. The area also has a few foci of earthquake activity that may be related to an active hydrothermal system under the region.

The Science of Novarupta

The fascination with the eruption goes beyond the size of the event. Ok, yes, nobody likes a large eruption (that only killed 0-2 people) more than me, but even so, that isn't what really captures the attention of volcanologists and petrologists. The Katmai/Novarupta eruption produced a vast ash flow tuff, formed by multiple pyroclastic flows and air falls that formed the famous "Valley of 10,000 Smokes". The name was derived from the first scientific visits to the area that saw a vista of steaming fumaroles (see above) across the valley that had been filled by the ash flows from Novarupta. The flows were still hot enough to release gases and boil water and would be until the 1980's (to a much smaller degree). Modern geology had never seen the deposition of such a large ash flow sheet, so it was the first time we could examine first-hand how the sheet cools and welds after an eruption. As I alluded to above, it took a long time to determine exactly where the eruption was sourced. No one was near the eruption when it started (that we know) and even if you were close enough to see it, you likely wouldn't have survived. So, when the first people to see the results of the eruption noticed that 3 of the 4 summits of Katmai (see below) were gone and a caldera was there in its place, the logical conclusion was that the eruption came from Katmai (much like was thought to have happen at Oregon's Crater Lake). However, almost 65 years later, careful mapping of the ash layers in the area by G.H. Curtis showed that the got thicker as you moved away from Katmai towards Novarupta. This conclusively proved that the eruption didn't come from Katmai, but rather that it was source from an entirely new vent at the northwest foot of Trident. One problem solved ... and a whole new problem was born: why was there a caldera on Katmai now? It was clear that nothing erupted from Katmai during the 1912 eruption - all the mapping of eruptive products pointed to Novarupta as the only source of the eruption. So, the logical conclusion was that, although the eruption was centered at Novarupta, the location of collapse from draining all that magma was Katmai, a full 10 kilometers to the east of Novarupta (see map above or figure below). This really opened eyes about magmatic plumbing under volcanoes - no longer could one blithely say that the source of magma for an eruption was a vat directly under the volcano erupting as now we clearly had an example where the magma came from someplace else! This problem is still being discussed, but was is clear is that much (if not all) of the magma erupted during the 1912 eruption came from behind Katmai, which makes sense as it was the only source of rhyodacite magma in the area. However, the volume of the caldera is much less than the total volume of material erupted, so possibly not all of the magma came from beneath Katmai. Hildreth and Fierstein (2000) suggest that a sill of new magma intruded along a pre-existing crustal feature that connected the magma residing under Katmai with the new vent at Novarupta (see below), however, as they put it in the 2000 paper "from the point of view of resolving the magmatic plumbing puzzle for the Katmai cluster, there are too many smoking guns."

The eruption produced a strange array of magma as well - ranging from 50 to 78% silica. If you're a petrologist, you know that is a lot of different magma compositions, everything from andesite to rhyolite. Typically in these eruptions, you might get a wide range like this, but 90-95% of the eruption is rhyolite. However, at the 1912 eruption, only 55% was rhyolite that the other 45% was andesite and dacite, which is quite a large fraction of "other stuff". Many of the eruptive products from Novarupta are banded - that is, they show smearing, mixing and mingling of different magmas, so that was common in the eruption. The opening salvo from the eruption was almost entirely crystal-free or crystal-poor rhyolite and then the later stages were crystal-rich andesite and dacite (see above). One suggestion by Hildreth and Fierstien (2000, 2012) is that this eruption represents first, the eruption of rhyolite squeezed from a crystal mush under Katmai and then, the eruption of the mush itself (as crystal-rich andesite and dacite) - and I tend to believe this interpretation. Last week, I talked about recent studies (including my own) looking at the sources of crystals in magmatic systems where crystal-poor rhyolite is squeezed out of a mush by triggers such as new intrusions or earthquakes - both of which appeared to have happened during the 1912 eruption. Overall, the 1912 eruption shows how interconnected magmatic systems in a cluster of volcanoes might be. What might happen in the future? An interesting thought experiment is to wonder what might have been different if the Novarupta eruption occurred in 2012 instead of 1912. Well, for starters, we would have known about potential activity well before the ~2 day warning that occurred in 1912. There wasn't a single seismometer within 1600 km of the Katmai Cluster in 1912, so the likely slow increase in seismicity associated with an impending eruption wasn't felt until the earthquakes were large enough for people to notice - and this wasn't only within a few days of the eruption. Luckily, most of the people near the volcanoes left when the earthquakes occurred (possibly thanks to regional knowledge that earthquakes lead to eruptions). Nowadays, AVO watches the Katmai cluster (along with all of the Alaskan volcanoes) for the smallest changes - there is even a webcam and webicorder for the area. The area of the Alaska Peninsula is still sparsely populated, but and important things occurred nearby ... actually, directly above: air traffic. Not only would the trans-Pacific lines be affected by ash of a Novarupta-scale event, but the ash fallout distribution shows that the potential exists for air travel across much of Canada and the northern United States (especially Seattle, Portland, Vancouver) to be halted. Thankfully, the eruption only lasted 60 hours, but it took at least a week for the ash to settle out of the atmosphere.

Today, only occasional earthquake swarms occur in the Katmai Cluster and many of the hydrothermal features created during the 1912 eruption are dead. The most recent activity in the cluster were blocky andesite lava flows from Trident (see above) - a much more typical type of event in the cluster than the 1912 eruption. This is what we might expect from the volcanoes of the cluster in the future: andesite-to-dacite lava flows and domes, much like their Alaskan brethren like Augustine, Cleveland and Redoubt. However, the 1912 eruption at Novarupta does show the potential for a new massive eruption to occur where none has happened in the geologically-recent past - a reminder of how vital volcano monitoring and research can be in helping notice the signs of such an event well in advance. References