The more images I see posted at The Big Picture -- the Boston Globe's online high-res photography feature -- the more I am dazzled by it. Last week, it had stunning pictures about the Baikonur Cosmodrome facility in Kazakhstan, the Russian launch facility. The way things are looking, once the Shuttle retires, there will be a gap of several years before the next man-rated US rocket will fly, so we will rely heavily on the Russians for human access to the space. These images give us a glimpse into that ability. My favorite image in The Big Picture set shows a Proton-M rocket being transported to the launch facility, but it's copyrighted and I can't use it here. However, a next-best one shows a Soyuz TMA-3 in similar repose. 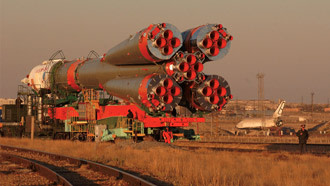 It's been quite some time since the fall of the Soviet Union, but the rocket itself, as well as the layout and composition of this picture -- even with the uniformed man walking alongside down and to the right -- give this one a quintessential Soviet feel to it.