The Best of Current Science Culture 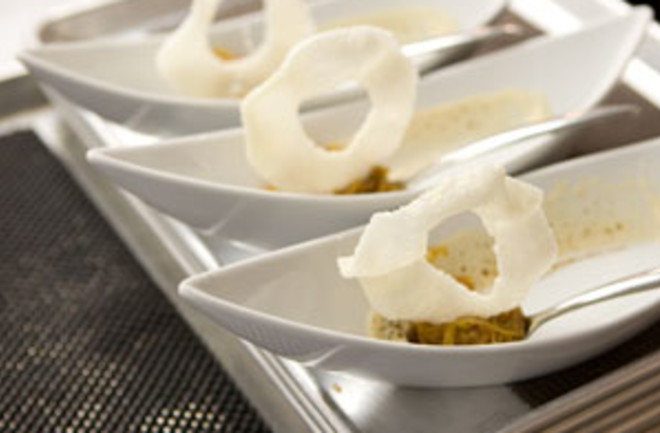 Grossing out customers with crazy kitchen concoctions and simultaneously saving the planet: This is the world of Homaru Cantu and Ben Roche. They are the chefs behind Moto, the Chicago restaurant famous for using science and experimentation to craft a menu full of the bizarre. They are also the hosts of Future Food, a series making its initial run on Planet Green through the end of May. The show features the two men challenging themselves and the other chefs on staff to cook the seemingly impossible with the help of some cutting-edge culinary technology.

In the pilot, our hosts try to make food that looks and tastes like seafood from other ingredients. Cantu coats watermelon—which he wants to turn into “tuna”—with spices and puts it into a Cryovac machine to pull in those flavors. Then a liquid nitrogen bath gives it a seared texture. Cantu and Roche discovered most of these techniques through trial and error. “There’s no handbook if you want to start replicating food,” Cantu says.

Many of the Future Food challenges border on silly, like making health food look like junk food. But for Cantu there is a bigger picture. He imagines popularizing fake tuna to solve the overfishing crisis, or recycling day-old bread into appealing new dishes to cut down on edible waste. But judging by the reactions when the two mad chefs take their creations to the people, not everyone is ready for watermelon seafood.

The first footprint on the moon will be a wing tip. So says an amusing 1961 advertisement in this gorgeous collection of space-age ads by real-life “mad men” that captures the era’s irrepressible vision of the future. Prelinger deftly highlights where promotional sci-fi accurately anticipated reality and where it missed the mark—though often with unimpeachable style.

Physicist Michael Beard, a Nobel laureate past his prime, struggles to save the world from climate change in this new novel. The knowing references to basement tinkerers and smug climate activists reinforce McEwan’s smart, sardonic tone.

by Ian McEwan (Nan A. Talese)

Crosby’s harrowing account traces seven case histories during the early-1900s epidemic of encephalitis lethargica, a sleeping sickness. Brain swelling sent its victims into a mysterious (and sometimes deadly) slumber. Frighteningly, a few cases still pop up, and doctors do not understand why.

Take a rousing romp through the zoo of beasties that make a living invading our bodies. Kaplan, a professor of parasitology and himself a victim of amebic dysentery and 8-inch roundworms, gives a raucous crash course that blends surprising biology with macabre stories.

The author’s parents worked on early contraceptives, and May participated in some clinical trials during the 1970s. This perspective pervades her story of the Pill, which bounds through tales of ethically questionable testing and power struggles over the drug that became a part of daily life for millions of women.

America And The Pill

By Elaine Tyler May (BASIC Books)

Dead or Alive Museum of Arts and Design, New York City Insects, chickens, and cows get a second life in this exhibit, but it’s a life very different from their first. “Dead or Alive” includes provocative pieces from 30 artists who use bones, fur, and other materials from animal or plant remains. There is a dodo made of scrapped chicken carcasses from fast-food restaurants, and thousands of insects mostly native to Asia are dotted on a surface to resemble vintage wallpaper. These elegant forms blur the boundary between life and death. Runs to October 24, 2010.

Real Pirates St. Louis Science Center In 1717 a vicious storm off the Cape Cod coast wrecked the Whydah, an English slave ship commandeered by pirates. All but two of the 146 people aboard were killed. Explorer Barry Clifford rediscovered the Whydah in 1984, making it the first authenticated pirate shipwreck in U.S. waters. “Real Pirates” features much of the Whydah’s gold coins, jewelry, and weaponry. Visitors can even touch some of the pieces. In addition, the exhibit reveals how divers raised the ship after it had spent nearly three centuries in the deep. Opens now.