The Best in Science Culture 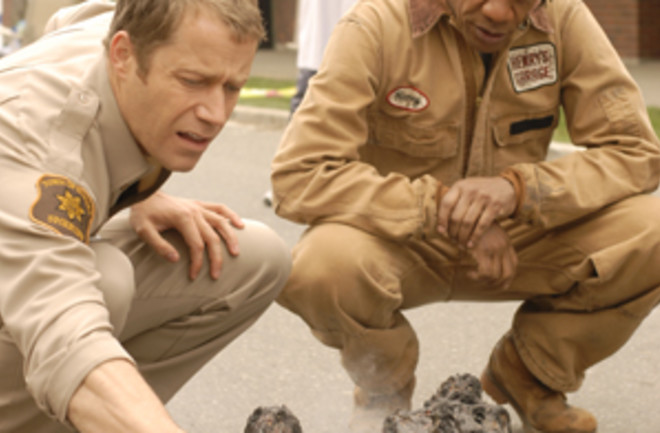 WAREHOUSE 13 and EUREKA Syfy (formerly Sci Fi Channel), Tuesdays and Fridays at 9 p.m. (EDT) Equal parts X-Files, Ghostbusters, and Men in Black, Syfy’s new dramedy, Warehouse 13, revolves around a U.S. government warehouse for bizarre and supernatural objects, such as an ancient electric car, Pandora’s box, and a tea kettle that grants wishes. Two Secret Service agents, Pete (Eddie McClintock) and Myka (Joanne Kelly), work at this top-secret facility in South Dakota, where the curator (Saul Rubinek) tasks them with keeping the collection under control and investigating paranormal reports that might lead to new acquisitions. The formula of partner agents on a wild mission is not new, but this likable duo enjoys a chemistry that keeps the dialogue fresh and palatable. And even viewers who don’t typically go for ghost stories can get a kick out of storylines incorporating forgotten inventions by Edison and Tesla. Summer also brings new episodes of Eureka, the well-received series about a classified town populated by geniuses. The love interest of Sheriff Jack Carter (Colin Ferguson, above at left, with Joe Morton), daughter Zoe’s college decision, and Allison’s pregnancy will all be resolved. —Sam Kissinger

Mystery Science Theater 3000: XV The latest installment of the cult-classic peanut gallery hits DVD July 7. Laugh along with Joel, Mike, and the bots as they lampoon sci-fi films like The Robot vs. the Aztec Mummy. The cringe-worthy costumes, stilted acting, and cheap effects are even worse than you remember.

Fuel on PS3, XBOX360, & PC Race through a dystopia devastated by climate change to win (and burn) fuel. The game’s creators have crafted a stunning graphic environment with no boundaries: If you can see it, you can drive to it. Players must make tough decisions about the most efficient path, depending on their off-road abilities and which of the 70 available vehicles they have selected.

DISTRICT 9 Sony Pictures A new apartheid in South Africa targets an alien race that has arrived on Earth, raising questions about whether humans who struggle to get along with each other can peacefully coexist with intelligent beings who are radically different. “It’s not a political film that will beat you over the head with moral lessons,” insists writer and director Neill Blomkamp, who grew up in South Africa and created the thought-provoking 2005 short Alive in Joburg, on which the feature film is based. “It is a science fiction film set in a place with a complicated, aggressive history.” Look for organic realism in the visuals, which immerse the special-effect aliens in a live-action environment.—Jeremy Labrecque

How to Build Your Own Spaceship by Piers Bizony When it comes to actually building a craft, your mileage may vary, but Bizony delivers an engaging survey of the commercial space technology that could soon send multitudes of civilians into orbit. Explanations of modern rocketry are remarkably readable, and there are even tips for space-bound entrepreneurs on lunar-base placement and space suit redesign.

Wireless by Charles Stross This lively collection from the Hugo Award–winning author of Accelerando includes recent short stories plus the fast-paced original novella Palimpsest. In the latter, double-crossing agents of an elite organization use time travel to save humanity from extinction over and over, inhabiting a loopy time­scape where it is possible to murder oneself and live to tell the tale.

Writer Mooney and marine scientist Kirshenbaum argue persuasively for scientists to step up engagement with the public, in order to dispel misinformation and foster meaningful civic participation in decisions about issues such as nuclear power, climate change, and public health.

Between XX and XY by Gerald N. Callahan

Immunologist Callahan takes a fascinating look at the biology and human experience of intersexuality—a state in between male and female. Both the science and the profiles make it clear that biological sex is not a binary proposition.