The Atomic Age: Far More Than Explosions and Electricity 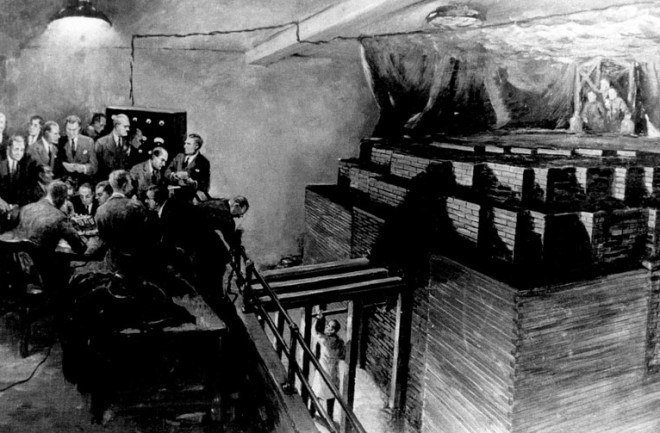 Scientists witness the first nuclear fission chain reaction. (Credit: John Cadel/Chicago History Museum) Seventy-five years ago, the world officially entered the Atomic Age. Henceforth, it would never be the same. In October 1942, as part of the Manhattan Project, Enrico Fermi assembled a crack team of physicists for an urgent, top-secret government mission: Conduct the first man-made, self-sustaining nuclear chain reaction to prove it was indeed possible to build an atomic weapon—and do it before the Germans. For months, Fermi’s team toiled away on a squash court tucked beneath the western grandstand of Stagg Field at the University of Chicago. The team milled 45,000 graphite bricks and shaped uranium oxide powder into 22,000 baseball-sized spheres. They took those graphite bricks and stacked them—with the help of broad-shouldered football players and laborers—into a 57-layer pile, positioning the uranium oxide balls in the middle, and wrapping the whole thing in wood. This is how they hoped it would work: Free neutrons, produced by the decay of uranium, would be absorbed by other uranium atoms and kick-start a self-sustaining fission reaction. In all, the Chicago Pile-1 (CP-1) contained 400 tons of graphite, 6 tons of uranium metal and 45 tons of uranium oxide. Fermi would later describe the reactor as “a crude pile of black bricks and wooden timber.”

An illustration of the Stagg Field reactor. (Credit: Melvin A. Miller of the Argonne National Laboratory) But it worked. And on Dec. 2, 1942, 49 scientists gathered on the squash court balcony and watched Fermi commence a test of the large reactor. Physicist Samuel Allison held a bucket of cadmium nitride, which he planned to dump on the stack to halt a runaway reaction, if it occurred. At 3:25 p.m., the crackling of Geiger counters indicated the pile had “gone critical.” The experiment was a success—it only generated enough energy to power a lightbulb. The physicists popped a bottle of Chianti, and sent a coded message to the head of the National Defense Research Committee James Conant, “The Italian navigator has landed in the New World.” “For some time, we had known that we were about to unlock a giant; still, we could not escape an eerie feeling when we knew we had actually done it,” CP-1 physicist Eugene Wigner wrote in The New York Times Magazine in 1963. “We felt as, I presume, everyone feels who had done something he knows will have very far-reaching consequences which he cannot foresee.” The Manhattan Projected opened the door for a new, powerful and terrifying weapon that changed the dynamics of international negotiations for generations to come. Hiroshima and Nagasaki will never be forgotten. Nuclear power generation conjures haunting memories of Chernobyl and Fukishima. But the Atomic Age isn’t all doom and gloom; there are a host of peaceful ways humanity has benefited from atomic energy, and on the anniversary of the CP-1 breakthrough, we dug up some of the perhaps lesser-known ways we’ve benefited during the Atomic Age.

The ubiquitous Cavendish banana could be saved using radiation. (Credit: Shutterstock) If the CRISPR approach to gene editing is like firing a sniper, deploying radiation is akin to pulling the trigger on a shotgun. Scientists blast radiation at groups seeds and plant cuttings to scramble their genetic code and produce random mutations. Those seeds are then cultivated and inspected for the most desirable mutations. It’s a roll of the dice, but it’s a process that’s fast, simple and cheap. And unlike CRISPR or other techniques, there’s no man-made genetic modification. Rather, the radiation put stresses on the plant forcing it to adapt with its own genetic material. It's widely used in developing countries and has yielded more than 3,200 useful mutants that appear in grocery stores the world over. Today we have mutant wheat, rice, pears, peas, peppermint, grapefruit and more. In Bangladesh, for example, varieties of rice produced via mutation breeding have increased crop yields threefold over the past few decades, according to the World Nuclear Association. Radiation could also save the ubiquitous Cavendish banana. “There’s a banana blight, and part of the reason is we use a single variety. But there’s a fungus that attacks them, and groups are using radiation to modify bananas to develop resistance,” says Eric Isaacs, a physicist at the University of Chicago. That fungus, known as Panama Tropical Race 4, has spread throughout Asia, Africa and the Middle East. TR4 enters the plant through the roots, colonizes the xylem vessels and blocks the flow of water and nutrients, slowly killing the plant. What’s worse, the fungus persists in the soil. So, researchers around the world are blasting banana crops with radiation to see if they can find a viable strain that’s resistant to the fungus, without skimping on yield. So far, results have been encouraging, but there’s still work to do.

People living in arid regions of the world rely on water that’s buried deep in aquifers, and one of the most important questions is, “How quickly is that aquifer replenished?” Now, scientists can answer that with atomic energy. The Argonne National Laboratory developed a relatively new technique called atom trap trace analysis (ATTP), which analyzes trace isotopes in water with a laser as a means to date groundwater. By comparing the state of decay of, say, a krypton radioisotope in water to stable krypton isotopes, scientists can determine how old a sample of water is. And that’s important information for managing underground aquifers. “Once we can determine how long ago that water seeped into the aquifer, it’s easier to decide how to manage it,” says Isaacs. If water in an aquifer is 20,000 years old, it’ll probably take quite a while for it to replenish, as opposed to an aquifer with 500-year-old water. That will hopefully alter the way governments manage that vital resource. Today, around the world scientists are using this technique help countries manage aquifers, date ancient ices and even help determine when water first arrived on the planet.

Insects are a menace to food crops, and despite the widespread use of insecticides, they can destroy 10 percent of crops globally every year—especially in developing countries. But for more than six decades, humanity has fought back against meddlesome bugs with radiation.

The Sterile Insect Technique (SIT) is quite similar to breeding mutant plants. Large populations of insects are reared in a controlled environment and the males are sterilized with heavy doses of gamma rays or X-rays. The sterile insects are released back into the wild where they remain sexually competitive, but fail to produce offspring. SIT was first developed in the United States and is now used across six continents. It has successfully controlled populations of mosquitoes, moths, tsetse flies, screwworms and other pests. In addition to saving crops, SIT also saves lives by reducing the number of insects that carry diseases. Recently, the SIT technique was used to combat the spread of the Zika virus in Brazil.

These are just a few of the myriad peaceful, safe uses for atomic energy. Today, radiation is used to scan baggage at the airport, power NASA spacecraft, detect smoke in your home and diagnose disease. While nuclear explosions and power plants are signatures of the Atomic Era, humanity has benefited mightily since that breakthrough 75 years ago on a squash court in Chicago.