The 50th Anniversary of Starfish Prime: The Nuke that Shook the World 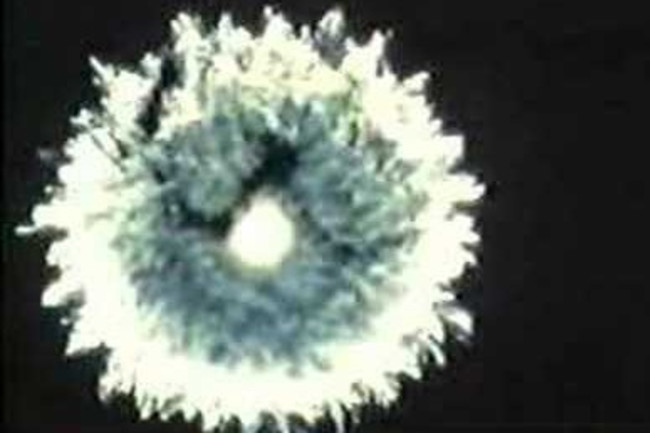 On July 9, 1962 — 50 years ago today — the United States detonated a nuclear weapon high above the Pacific Ocean. Designated Starfish Prime, it was part of a dangerous series of high-altitude nuclear bomb tests at the height of the Cold War. Its immediate effects were felt for thousands of kilometers, but it would also have a far-reaching aftermath that still touches us today.

In 1958, the Soviet Union called for a ban on atmospheric tests of nuclear weapons, and went so far as to unilaterally stop such testing. Under external political pressure, the U.S. acquiesced. However, in late 1961 political pressures internal to the USSR forced Khrushchev to break the moratorium, and the Soviets began testing once again. So, again under pressure, the U.S. responded with tests of their own.

It was a scary time to live in.

The U.S., worried that a Soviet nuclear bomb detonated in space could damage or destroy U.S. intercontinental missiles, set up a series of high-altitude weapons tests called Project Fishbowl (itself part of the larger Operation Dominic) to find out for themselves what happens when nuclear weapons are detonated in space. High-altitude tests had been done before, but they were hastily set up and the results inconclusive. Fishbowl was created to take a more rigorous scientific approach. 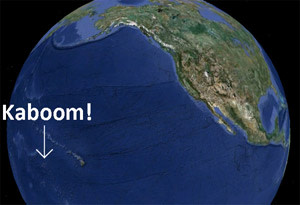 And all hell broke loose.

1.4 megatons is the equivalent of 1.4 million tons of TNT exploding. However, nuclear weapons are fundamentally different from simple chemical explosives. TNT releases its energy in the form of heat and light. Nukes also generate heat and light, plus vast amounts of X-rays and gamma rays — high-energy forms of light — as well as subatomic particles like electrons and heavy ions.

When Starfish prime exploded, the effects were devastating. Here’s a video showing actual footage from the test, 50 years ago today:

As you can see, the explosion was roughly spherical; the shock wave expanding in all directions roughly equally since there is essentially no atmosphere at that height. Another video has many more views of the test; I’ve linked it directly to those sequences, but if you start at the beginning it’s actually an hour-long documentary on the test. 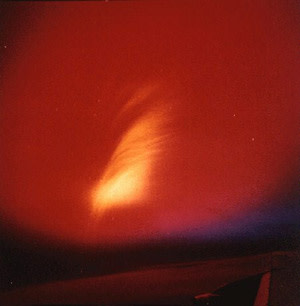 Nuke ’Em ’Til They Glow

One immediate effect of the blast was a huge aurora seen for thousands of kilometers around. Electrons are lightweight and travel rapidly away from the explosion. A moving electron is affected by a magnetic field, so these electrons actually flowed quickly along the Earth’s magnetic field lines and were dropped into the upper atmosphere. At a height of roughly 50-100 kilometers they were stopped by the atoms and molecules of Earth’s atmosphere. Those atoms and molecules absorbed the energy of the electrons and responded by glowing, creating an artificial aurora.

Heavy ions (atoms stripped of electrons) are also created in the blast, and get absorbed somewhat higher up in the atmosphere. The image here shows this glow as seen by an airplane moments after the nuclear explosion. The feathery filament is from the bomb debris, while the red glow may be due to glowing oxygen atoms; this tends to be from atoms higher than 100 km, so the glow is probably due to the heavy ions impacting our air.

Taking the Pulse of a Nuclear Weapon

But the effects were far more than a simple light show. When the bomb detonated, those electrons underwent incredible acceleration. When that happens they create a brief but extremely powerful magnetic field. This is called an electromagnetic pulse, or EMP. The strength of the pulse was so huge that it affected the flow of electricity on the Earth hundreds of kilometers away! In Hawaii it blew out hundreds of streetlights, and caused widespread telephone outages. Other effects included electrical surges on airplanes and radio blackouts.

The EMP had been predicted by scientists, but the Starfish Prime pulse was far larger than expected. And there was another effect that hadn’t been predicted accurately. Many of the electrons from the blast didn’t fall down into the Earth’s atmosphere, but instead lingered in space for months, trapped by Earth’s magnetic field, creating an artificial radiation belt high above our planet’s surface.

When a high-speed electron hits a satellite, it can generate a sort-of miniature EMP. The details are complex, but the net effect is that these electrons can zap satellites and damage their electronics. The pulse of electrons from the Starfish Prime detonation damaged at least six satellites (including one Soviet bird), all of which eventually failed due to the blast. Other satellite failures at the time may be linked to the explosion as well.

The overall effect shocked scientists and engineers. They had expected something much smaller, not nearly the level that actually occurred. Because of this, later high-altitude nuclear tests made by the US as part of Operation Fishbowl were designed to have a much lower yield. Although the explosion energies are still classified, it’s estimated they ranged from a few dozen to a few hundred kilotons, a fraction of the 1.4 megaton Starfish Prime explosion.

The long-term physical effects from the explosion died down after a few months, but the ramifications live on today. In 2010, the Defense Threat Reduction Agency issued a report called "Collateral Damage to Satellites from an EMP Attack", and I highly recommend reading it if you’ve gotten too much sleep lately. It details the effects of a high-altitude nuclear blast, and how one could be used to disable an entire country in one blow.

I am of the opinion that knowing is better than not knowing, even when the knowledge is terrifying. In this case, forewarned is forearmed. This EMP knowledge has been out there for decades, so the more we understand it, the better we may be able to use it to prevent damage from the bad guys from trying something like this.

And if I may distance myself from the horrifying political and dark human aspects of all this, there was much science learned. EMPs are fascinating, and don’t need nukes to occur. The Sun blasts out high energy particles and light during solar storms. In much the same way, these can damage our satellites and harm our astronauts in space.

Learning about them from Starfish Prime increased our understanding of the physics of EMPs, and also gave us insight into mitigating the effects. Interestingly, a nearby supernova or gamma-ray burst (a kind of super-supernova) would also have very similar effects, and could even directly affect our atmosphere. The good news is there are no potential supernovae or GRB progenitors close enough to hurt us. However, as our Sun orbits the galaxy, there may have been a time when one did go off nearby, millions or billions of years ago. There’s some thinking that the Ordovician extinction 440 million years ago — when the trilobites died out — may have been due to a nearby GRB. The evidence is sketchy for sure, but intriguing. 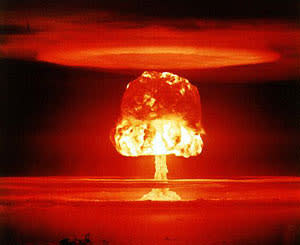 Lesson on the Half-Century Anniversary

So what do we make of all this? What conclusions may be drawn?

The scientific conclusions are rather straight-forward — the existence of EMPs, the damage to satellites, the artificial aurorae and radiation belts — and have added to our knowledge.

But at what cost? I was alive and entering young adulthood at the end of the Cold War. I wasn’t born when Starfish Prime went off, but I do remember other tests, and I remember some of the nightmares I had as a kid about nuclear war. This wasn’t ancient history; it was just a few years ago. The concern over nuclear weapons is still real, as well it should be, even if the situation has evolved somewhat since then.

It may seem like madness now that there were two such huge powers (not including China, which was also a credible nuclear threat at the time) testing nuclear weapons on our own planet. Perhaps it was madness. Still, the idea of two enemies with such overwhelming capability to destroy each other and themselves is behind the premise of Mutually Assured Destruction — making it insane to attack, since it guarantees your own destruction.

That assumes one of the groups in questions doesn’t want to die. With some religious fanatics, that deterrent not only goes away, but actually becomes an instigation. That’s one reason I support reasoned, well-investigated intelligence efforts by governments. These efforts can be abused, of course, so we must be vigilant in watching the watchers. But there’s little doubt they’re needed. Bad guys are out there.

So I urge you, on this unhappy anniversary, to read more about the explosion that taught us so much about unexpected consequences, and to think about how fragile our existence can be — and why we must fight so hard for it.

I’ll leave you with one more thing. From an article I wrote in 2010, here is a video by Isao Hashimoto showing the location and information for every nuclear detonation on Earth. I titled it "What the hell were we thinking?"

What the hell were we thinking?