Calculating the most influential scientific equations is no easy task. But these five certainly rank in the top tier. 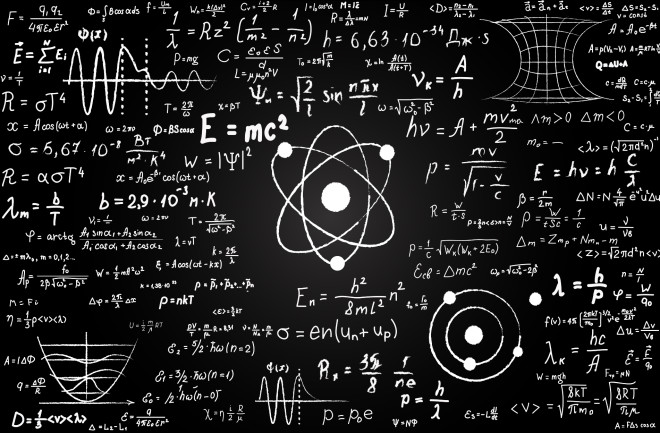 What’s in an equation? Letters and numbers and odd symbols — but also a novel insight into the relationships between fundamental constituents of our physical reality. All equations crystallize something important about the universe, whether it be the relationship between mass and energy, the gravitational attraction between two bodies or the sides of a triangle.

The most important part of any equation is the equals sign at its heart. Those two horizontal lines tell us that when we change one thing, we’ll see a corresponding change in another, apparently separate thing. In this way, equations reveal the connections between superficially different quantities or properties. Once linked together, that newly discovered relationship can serve as the basis for future insights.

To pick the most important equations is an almost hopeless task. The importance of any given relationship will differ greatly depending on the context. If you are falling out of an airplane, for example, the law of gravitation will feel much more significant than will the Schrödinger equation. SImilarly, equations are of different importance to scientists depending on the field they are in.

But it is possible to pick out a few equations that have had an outsize influence on the way we see the world. While it’s not an exhaustive list, these five equations all summarize something brand new — whether it be a new relationship between things, or just a new way of looking at the world. And once set down on paper, these equations all enabled future breakthroughs as generations of thinkers used their powers to make new discoveries.

For our first, we’ll take perhaps the most famous equation of all. Albert Einstein’s 1905 equation relating mass and energy is both elegant and superficially counterintuitive. It says that energy is equal to the mass of an object in its rest frame multiplied by the speed of light squared. In doing so, Einstein revealed that mass and energy can be considered equivalent to each other, uniting what had been up until then two separate domains.

From Einstein’s equation, we can see that changing the mass of an object will also change the energy it contains, and vice versa. This is made frightfully apparent during a nuclear explosion, when tiny changes in the mass of radioactive elements correspond to massive amounts of energy.

There is a common misconception that the equation shows that mass can be transformed into energy, and back again. That’s not actually what Einstein meant. Instead, he showed simply that changing mass must result in a change in energy — albeit a very large one.

The essential relationship between the two legs of a right triangle and its hypotenuse is named for the Greek philosopher Pythagoras, though he wasn’t necessarily the first to come up with it.

The theorem shows that, for any right triangle, we can add together its two shorter legs squared and get the length of its longest leg squared. The insight brought together the disciplines of geometry and algebra, and it’s a good early example of using the relationships between shapes to derive a basic observation about numbers. Subsequent discoveries in this vein live on today in the field of topology, and, more prosaically, we rely on the theorem every time we have a GPS triangulate a position for us.

The laws of thermodynamics arose from observations of how energy moves around. The first law states that energy must always be conserved — an important finding in its own right. But the second law, which initially described how heat was transferred in a system, would prove to have extraordinarily far-reaching implications.

The law can be formulated in many ways depending on the situation, but the most basic observation it makes is that heat — and therefore energy — flows naturally in one direction only, from hot to cold. While we can heat something up by expending energy, that’s just a temporary solution.

It’s something we see every day, but the significance is vast. That irreversibility underlies heady concepts like the arrow of time and entropy. Ultimately, it leads to the inevitability of the heat death of the universe — when mass and energy have been spread out so thinly and evenly across the cosmos that nothing more can happen.

Calculus involves many different equations, but it began with a single breakthrough. Two 17th-century thinkers, Isaac Newton and Gottfried Leibniz, independently found a way to formalize the convergence of infinite series as they approach a defined limit. This arose in part from the problem of trying to calculate the slope of a curved line at any given point. It’s a question that mathematicians had partially answered before, but never as elegantly and completely as Leibniz and Newton did.

Their work led to the derivative and the integral, the two cornerstones of calculus. Derivatives give us the rate of instantaneous change of a function, and integrals give the area underneath a curve on a graph. Today, calculus is a part of engineering, physics, economics and many other scientific disciplines.

The two mathematicians disagreed bitterly over who should be considered the true father of calculus. Today, both men are credited with inventing it independently of one another. We can thank Leibniz for the term calculus itself, though. If Newton had his way, today we’d instead be referring to the “Method of Fluxions.”

Though Newton must share the credit for calculus, he can unilaterally claim credit for his Universal Law of Gravitation. The equation draws on work from scientists like Galileo and Johannes Kepler to state that every particle of matter in the universe exerts an attractive force on every other particle of matter. This force increases with mass and decreases exponentially with distance.

Newton’s work unified Galileo’s observations of the motion of objects on Earth with Kepler’s study of the motion of astronomical bodies. The result was an equation that showed the same rules govern the motions of both planets and cannonballs — not necessarily a given in his time.

Today, Newton’s laws have been supplanted by Einstein’s theory of relativity, which accounts for things that are very close together or very heavy, among other things. But Newton’s observations still hold for the majority of interactions we see around us. Not bad for someone in the 17th century.