That Fissure Opening "Near" Yellowstone? Not a Sign of an Impending Eruption. 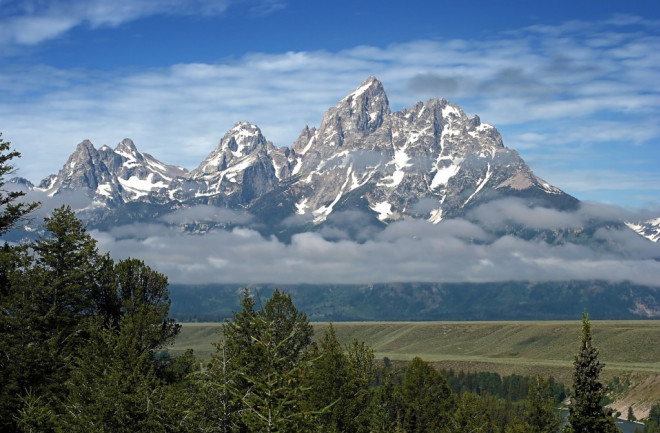 The Grand Tetons in Wyoming. Pixabay. Many people have pointed out to me that there is a news frenzy about "fissures opening near Yellowstone". Now, considering that if this were happening, that would be newsworthy, I had to check it out ... and with most "news" about Yellowstone, it is much ado about nothing related to the volcano in Wyoming. Climbers in Grand Teton National Park, to the south of Yellowstone, have noticed that the cliff face at Hidden Falls and Inspiration has been breaking off due to cracks ("fissures") on the mountain. This crack has made it very dangerous for climbers as bits of the cliff (or possibly the entire face) might come crashing down, taking climbers with it. This sort of thing happens often on exposed rock in mountain areas. They can be easily oversteepened and then gravity does its thing, bringing rock down fast. Yosemite National Park experiences this quite often and people have died in the process. That's why Grand Teton National Park has closed the area to the public. However, because this cracking -- likely due to faulting or weathering in the Tetons -- is happening in the general vicinity of the Yellowstone caldera, many in the media have wrongly connected these cracks with the volcano. Let's get it straight right now: this is in no way a sign of impending eruption at Yellowstone. Some sources have even tried to say things like "Grand Teton National Park sits atop the Yellowstone supervolcano". This is just wrong. Even when you look at the footprint of the volcanic system at Yellowstone (see below), it is a massive stretch to say that the Tetons are "over" Yellowstone. The Grand Teton mountain range were formed by the stretching of North America and formed in the geologically-recent past (the last 10 million years). Yellowstone is there due to a hotspot under North America and is not the cause of the Teton range. Connected the two directly is just a gross violation of correlation (location) leading to causation (fissure formed due to the volcano ... which it didn't).

Map of the Yellowstone caldera. The Grand Tetons (and this fissure) are to the south, beyond the extent of this map. USGS. Even the portrayal of the fissure as "vast" is overblown. Reports say it is 100 feet long. That's 30 meters. That is small. I realize that with the eruption in Hawaii, people are now attuned to hear "fissures" and "volcano" and jump to new conclusions that an eruption will start, but this is not the case here. There is no magma body near the surface under the Tetons -- and no other signs like earthquakes or gas release. So, no eruption is coming, especially from a 30 meter fissure over 100 kilometers from Yellowstone. Remember, always trend cautiously when you read about people saying Yellowstone is going to erupt soon. The only real source for news that the conditions at Yellowstone are changing is the USGS Yellowstone Volcano Observatory. Beyond that, 99% of all Yellowstone news that implies eruption is just an attempt to scare people into reading articles.