This will be old news to some people, but when I was back in England last week they were showing Guinness television ads that were short parts of an older ad that I had never seen, but about which my parents were raving. Fortunately, all things are available online, and this one is well worth seeing. 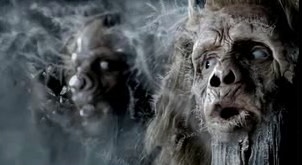 The ad combines two things I hold dear; a perfectly pulled pint of Guinness, and the theory of evolution. As described on the Guinness web site:

It starts with three friends enjoying a GUINNESSÂ® beer in their local pub. We then follow them on an extraordinary backwards journey. The three guys travel back through time, as they walk they seamlessly go back down the evolutionary chain. They turn into Neanderthals, then apes, mammals, prehistoric fish, small dinosaurs and strange mole like creatures before ending up as mudskippers somewhere near the dawn of time. They take a sip from a muddy puddle and react in disgust.