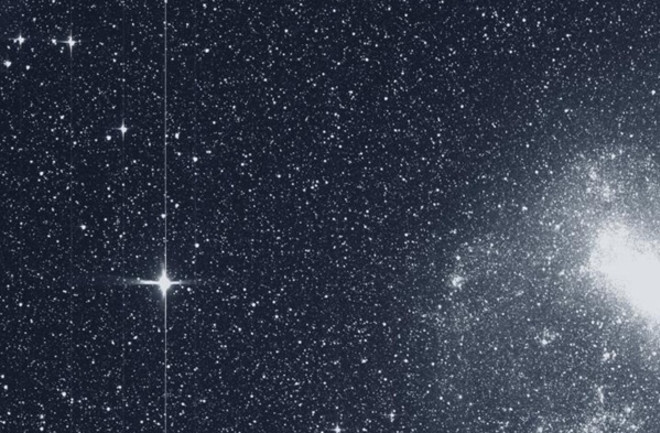 A portion of TESS' first light image, showing the Large Magellanic Cloud (right) and the bright star R Doradus. (Credit: NASA/MIT/TESS) NASA’s Transiting Exoplanet Survey Satellite (TESS) launched April 18, headed for an orbit that takes it out to about the distance of the Moon at its apogee. Just a few weeks later, it began science operations and a list of 50 exoplanet candidates rolled in, with researchers now expecting at least six of those first candidates to be eventually confirmed as bona-fide planets. The above image represents TESS’ “first light” science image, starting in the first of 26 sectors it will ultimately observe in its search for extrasolar planets. TESS finds planets by staring at a predetermined portion of the sky (one sector) for 27 days. During that time, it monitors the stars it sees for changes in brightness, which may be associated with dips in the light received as a planet passes in front of its parent star. However, changes in brightness can be caused by many other things as well, from intrinsic variability or starspots to the passage of a companion star (instead of a planet) between the target star and Earth. TESS’ current mission will last two years and cover 85 percent of the sky. Most of the stars it will study lie between 30 and 300 light-years from Earth — closer and brighter than the stars studied by its predecessor, the Kepler space telescope. Closer, brighter stars are easier to follow up on from the ground, allowing astronomers to confirm whether a planet is present and, ideally, learn more about the planet via other means, such as by taking spectra (which can reveal the composition of the planet’s atmosphere if it exists). Researchers can also target the star to watch for a telltale wobble as its planet orbits and tugs it ever so slightly in different directions, a method called radial velocity often used to confirm a planet’s presence and pin down its mass. Once the James Webb Space Telescope launches, it too will be used to follow up on TESS’ targets, improving astronomers’ ability to characterize the worlds TESS will find. “In a sea of stars brimming with new worlds, TESS is casting a wide net and will haul in a bounty of promising planets for further study,” said Paul Hertz, astrophysics division director at NASA Headquarters in Washington, D.C., in a press release. “This first light science image shows the capabilities of TESS's cameras, and shows that the mission will realize its incredible potential in our search for another Earth.”