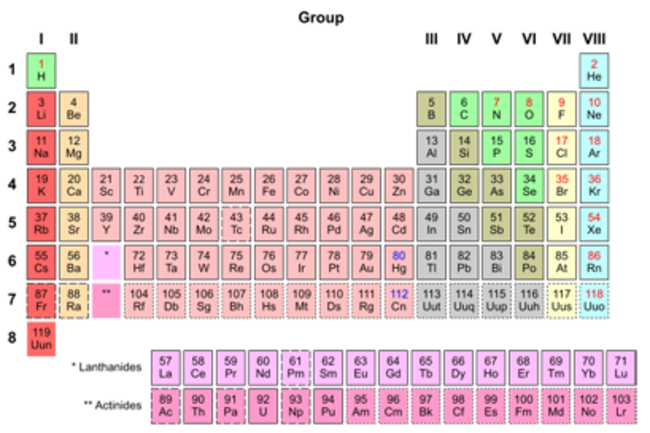 The weights, they are a-changin'. What we're taught in school science classes is a streamlined version of a muddier and more complicated reality, and it's no different with something as iconic as the periodic table of elements. This week the venerable chart's overseers decided to fiddle with the atomic weights of 10 elements, changing their values from a single set number to a range of numbers, which is messier but more accurately resembles the messy real world.

The reason for the change is that atomic weights are not always as concrete as most general-chemistry students are taught, according to the University of Calgary, which made the announcement, and the snappily named International Union of Pure and Applied Chemistry's Commission on Isotopic Abundances and Atomic Weights, which oversees such weighty matters. [CNET]

and you'll see two numbers to each element. The first, which is always a clean integer with no annoying decimal places, is the atomic number: it's the number of protons in the nucleus, and it also serves to give the element its place on the table. Copper has 29 protons, so it's number 29. Simple.

The second is the atomic weight. This tells us, in grams, how much a mole (6.02 x 10^23) of atoms will weigh, and is thus proportional to the weight of a single atom. These numbers are not integers, and that's not because atoms come in fractions. Instead, atoms have different isotopes that contain different numbers of neutrons in the nucleus. A pure isotope will have a well-defined weight, but in the natural world, most elements appear as a mixture of isotopes. A mass of hydrogen, for example, will mostly contain atoms with a single proton and no neutrons, but will have a few with one or two neutrons mixed in. As a result, when you have over 10^23 atoms of hydrogen around, these heavier isotopes ensure that it weighs a touch more than just a gram. [Ars Technica]

The problem here is that some elements have more than one stable isotope. As a result, the element's atomic weight could skew slightly lighter or heavier depending on which isotopes are present in the sample you're testing. Given that knowledge, the chemistry

powers that be decided it was improper to stick with a single number as the atomic weight for these elements, and instead assigned them a range of values.

Hydrogen, lithium, boron, carbon, nitrogen, oxygen, silicon, sulfur, chlorine and thallium are all getting the switch to the new way of stating atomic weight. Small potatoes, perhaps. But when Pluto was booted

from the planet club, we all saw what happens when you mess around with what people learned in science class. Related Content: DISCOVER: Elements: From the Newest to the Most Abundant to the Most Valuable

DISCOVER: 10 Obscure Elements That Are More Important Than You'd Think

80beats: New Element Discovered! But Don't Ask About Its Name

The SciencesWhat Is Silica Gel and Why Do Packets of It Come With Everything You Buy?