Tell him about the Twinkie...

I have a birthday coming up (eventually), and Mrs. BA is a fantastic baker. So I could ask her for any cake I want -- she's made a Spongebob cake, a Zim cake, even one indistinguishable from a pumpkin (seriously, people thought it was a jack-o-lantern when we brought it to a Halloween party). But even she doubts she could do this: 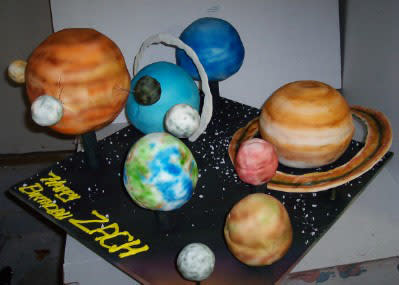 That's from Cakes by Bob, who is a BABloggee! He has a specialty cake store in Richmond, Virginia, not too far from my alma mater of UVa. In an email, he said to me, "Reading your blog on a regular basis, I decided to leave off Pluto, in spite of my affection for "Interplanet Janet"." Well, I'm of two minds about Pluto, but this is still pretty cool. Mrs. BA was admiring the picture the other day; I could see the wheels turning in her head as she tried to figure out how to make them. She thinks she can do the shapes, but the painting is another matter. I hope she can work this out. I want scale models of all 300+ extrasolar planets for my next birthday.