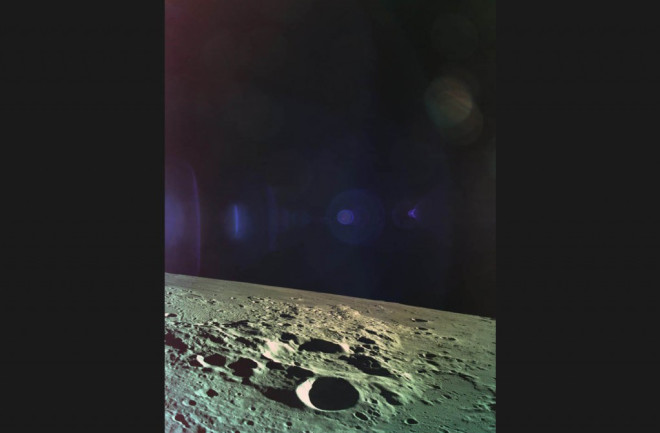 The Beresheet lander captured this image in its final moments descending toward lunar surface. (Credit: SpaceIL) Israel's Beresheet spacecraft, which was set to land on the moon yesterday, suffered an engine and communications failure, causing it to crash into the lunar surface. Details are still emerging about what exactly went wrong. SpaceIL and the Israeli Aerospace Agency (IAI), who built and operated Beresheet, have released a few specifics about the spacecraft's last moments. The trouble began when the lander was just 8.7 miles above the lunar surface, and was caused by a vague "technical glitch in one of Beresheet's components." This led to a chain of events that ended with the main engine shut down. Engineers managed to restart the engine, but by that point, Beresheet was moving too fast to avoid a crash. When mission control lost contact with the spacecraft, it was less than 500 feet from the surface, and moving at more than 300 mph. [embed]https://twitter.com/TeamSpaceIL/status/1116707055333720066[/embed]

The control room gave a round of applause nonetheless, recognizing the tremendous achievement they still accomplished. With the flight of Beresheet, SpaceIL became the first private company to orbit the moon, and Israel became the seventh nation to do so. They are technically also the fourth to land on its surface, though not in the way they had hoped for. In a press release, Harel Locker, Chairman of IAI, called the mission "a tremendous technological achievement for the State of Israel. ... This project lasted eight years and contributed significantly to the Israeli space industry, which today became one of the leading space industries in the world. Space travel is infinite, exciting, and inspirational."

Beresheet sent back a selfie during descent, just before its engine problems started. (Credit: SpaceIL) Benjamin Netanyahu, Israel's Prime Minister, was present in the control room for the event. He told the engineers, "If at first you don't succeed, try again." Though Beresheet made it to the moon after the 2018 deadline for Google's Lunar XPRIZE, which promised $20 million to the first company to soft-land on the moon and complete a series of small tasks, on March 28 this year, XPRIZE announced they would still offer a $1 million Moonshot Award if Beresheet could accomplish a soft landing alone. However, following the crash landing, XPRIZE announced it will still award the $1 million prize. https://twitter.com/PeterDiamandis/status/1116429177778049024 This story is still evolving, and we will continue to update this article with more information as it becomes available.