Tambora 1815: Just How Big Was The Eruption? 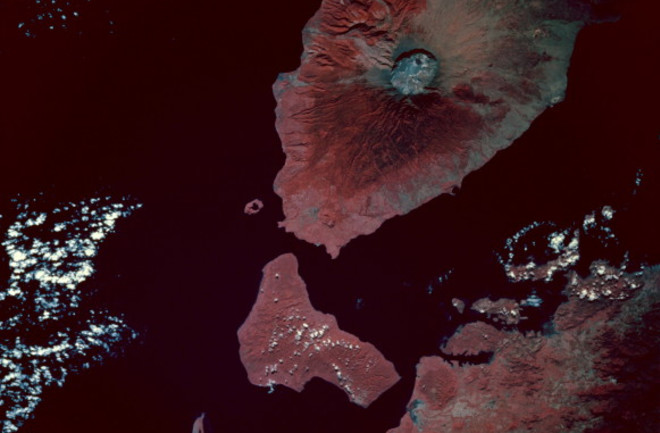 Space Shuttle image of Tambora (false color) taken in May 1992. The caldera from the 1815 eruption is clearly visible. NASA Today (April 10) marks the 200th anniversary of the largest volcanic eruption in recorded history. The 1815 eruption at Indonesia's Tambora was a blast that altered global climate for years afterwards and has been fingered as the trigger of revolutions and migrations. Over 70,000 people perished directly from the event and hundreds of thousands more may have died due to disease and famine that could be linked to the effect Tambora had around the world. So, just how big was this eruption and why is it so hard to measure its magnitude? Now, there have been a lot of great articles written about the 200th anniversary of Tambora, covering topics like its impact on climate and culture, how an eruption like Tambora could effect the modern world and how the world might be preparing for future Tamboura-scale eruptions. There was even an issue of Nature Geoscience dedicated to Tambora and volcanic hazard mitigation. Rather than rehash those article, I thought I'd tackle the context of the eruption -- and mainly the size of Tambora's 1815 spectacular. No eruption in any of our lifetimes have come close to the size and impact of Tambora and once volcanic eruptions get this big, it can sometimes be difficult to really grasp just how large of a geologic cataclysm it was. How much stuff came out? The eruption of Tambora produced 175 cubic kilometers of volcanic debris (mostly ash and other tephra). 175 cubic kilometers is ~6.2 x 10^12 cubic feet. How much is that? Well, you could bury all of the playing surface of Fenway Park in Boston 81,544 miles (131,322 km) deep in ash. That distance would make it around the world ... twice. You could bury the state of Rhode Island in 183 (55 meters) feet of ash or Singapore in 805 feet (245 meters) of ash. Volcanologists don't tend to compare volcanic eruptions based on the volume of volcanic debris because all that debris is mostly air. Instead, a calculation is made to convert this loose debris into dense rock equivalent. This represents the amount of magma erupted. For Tambora, those 175 cubic kilometers of volcanic debris is worth about 50 cubic kilometers of magma (so about 3.5:1 ratio of debris to magma). 50 cubic kilometers puts Tambora in the same class as the eruption of Mazama/Crater Lake in Oregon ~7,700 years ago (in other words: big, real big). Compare that to the biggest eruption of the 20th century, the 1912 eruption of Katmai in Alaska, and you'd find that Tambora erupted 3.8 times more magma and 2.9 times more volcanic ash and debris. You can look at the mass of the magma as well. The recent eruption in the Holuhraun lava field in Iceland produced a measly 1.4 cubic kilometers, 35 times less than Tambora. If you use the density of magma, you get about 150 gigatons of magma - that's 1.5 x 10^17 kilograms of magma! That's over 51 billion Saturn V rockets, 2.5 billion Iowa-class battleships or 22 million Hoover Dams. How fast did that come out? Tambora erupted an amazing amount of volcanic material and it did in a very short period of time. The whole eruption may have lasted no more than ~3 days. At its peak, it may have been erupting material at 300-500 million kilograms per second! That would work out to erupting over 6 million Christiano Ronaldosper second (or, if you like baseball better, 3.9 million Bartolo Colons - he's a little less svelte than Ronaldo) The Horseshoe Falls at Niagara, at peak times, have 168,000 cubic meters of water passing over it per minute. Using the density of water (1000 kilograms per cubic meter), that works out to 2.8 million kilograms per second. So, the eruption of Tambora emitted, by mass, 178 times more per second than Niagara can handle. Is that all? Magma isn't the only thing that came out Tambora during the 1815 eruption. When magma rises it releases gases that are dissolved in it. In a cataclysmic eruption like Tambora, that volcanic aerosols are catastrophically released. During the 1815 eruption, the volcano released 60 Tg (teragram, or 10^12 grams) sulfur, 100 Tg chlorine (as HCl) and 70 Tg fluorine. Using some of those same comparisons as I used with the magma, that's ~262,000 Saturn V rockets worth of sulfur and fluorine and ~437,000 of chlorine -- all erupted over the span of only a few days. The amount of sulfur released by Tambora was 6 times more than the 1991 eruption of Pinatubo but only 58% of the sulfur released in the 1783 eruption of Laki in Iceland. It was all these aerosols, especially sulfur, that caused the vivid sunsets (see below) and cooled climate seen around the world for years after the eruption.

Painting of Chichester Canal, showing the vivid sunsets caused by the volcanic aerosols of Tambora. J.M.W. Turner / Public DomainAll that ash The eruption had two main phases: an initial Plinian eruption followed by voluminous pyroclastic flows of hot volcanic debris roaring down the slopes of Tambora. The Plinian phase produced an ash plume that was ~33 kilometers tall, possibly peaking at 43 kilometers tall. Plume heights like that reach well into the stratosphere, meaning the ash and volcanic aerosols could be moved around the globe quickly in the winds. Most commercial aircraft operate at ~10 kilometers (33,000 feet), so this plume was 3-4 times higher than your average 787. That plume and the following pyroclastic flows spread ash across the region. How much ash and how far has been tricky to reconstruct, even for an eruption that occurred only 200 years ago. Over 500,000 square kilometers around Tambora was covered with at least 1 centimeter of ash -- that's like covering all of Spain or 2 Oregons with a centimeter of ash. Double that number likely received at least a dusting of ash, so something like the entirety of Colombia or 2 Californias. In Banyawangi, over 400 kilometers from Tambora (roughly the distance between Las Vegas and Phoenix), 23 centimeters (9 inches) of ash fell. That is more than enough, especially mixed with any rain, to collapse roofs. Big explosion means big energy An explosive eruption like Tambora releases huge amount of energy. A rough estimate for the 1815 event is ~1.4 x 10^20 joules of energy were released across the few days of eruption. One ton of TNT releases ~4.2 x 10^9 joules, so this eruption was 33 billion tons of TNT. That's 2.2 million Little Boys (the first atomic bomb). The US uses about 1.17 x 10^20 joules of power each year (at least in 2007), so Tambora, in the span of a few days, released about the same amount of energy as the consumption of the entire United States in one year (or ~ 1/4 of the entire world's annual energy consumption!) If you want to compare it to other geologic events, the 2004 Indonesian earthquake that generated the Boxing Day tsunami releases ~110 petajoules of energy (10^15 joules). That still leaves Tambora ~1200 times more powerful than that M9.3 earthquake. The consequences

A view from the caldera rim of Tambora, taken June 2008. Paul Hessels / Wikimedia Commons Before the eruption in 1815, Tambora was a volcano that might have been 4,300 meters (~14,100 feet) tall. That's about the same size as Mt. Rainier*. One of the biggest results of the 1815 eruption was the generation of a caldera -- a large depression caused by the volcano falling in on itself after emptying its innards during the eruption (see the image at the top). The Tambora caldera is ~1.2 kilometers deep, so the volcano lost at least a few kilometers of elevation in a matter of maybe a day. The total volume of the caldera is ~36 cubic kilometers, which is pretty close to the total volume of magma erupted (50 cubic kilometers), so most of the hole that was created during the eruption is the missing magma that is now spread out as the ash across southeast Asia. (*Rainier might also be an apt comparison as much of the volcano is very altered, so possibly prone to collapse.) Interestingly, even with the massive size of the Tambora eruption, a lot of the record of the direct aftermath, especially the ash fall, is gone. A few millimeters of ash might be noted in historical records (which are notoriously incomplete) but are almost never preserved in the rock record. You can find some of these fine layers of ash recorded in the the sediment at the bottom of the ocean, but not always. This means that even with a giant eruption like Tambora, you might lose much of the volcanic material produced, so if you go back and try to estimate just how big it was, you can severely underestimate it. There are likely big eruptions that happened when there was no historical record that could have been as big as Tambora in 1815 but that record is gone or at least partially obscured. It might be hard to imagine a giant volcanic eruption lost to the mists of time, but the processes at the surface of the Earth are quite efficient at removing those records. Based on evidence from the geologic record, the chances of another eruption the size of Tambora occurring somewhere on Earth might be around 10% in the next 50 years and more likely than not, it will be from a volcano in Indonesia. We might think that Tambora is an isolated incident from the past, but volcanoes think otherwise. Another Tambora will happen, and there is a decent chance that it could be in our lifetime. Whether or not we're prepared for it is another story, but we can be sure that we haven't seen the last of eruptions of this magnitude. Selected sources: Oppenheimer C (2003) Climatic, environmental and human consequences of the largest known historic eruption: Tambora volcano (Indonesia) 1815. Progress in Physical Geography 27:230–259. doi: 10.1191/0309133303pp379r Self S, Rampino MR, Newton MS, Wolff JA (1984) Volcanological study of the great Tambora eruption of 1815. Geology 12:659. doi: 10.1130/0091-7613(1984)12<659:VSOTGT>2.0.CO;2