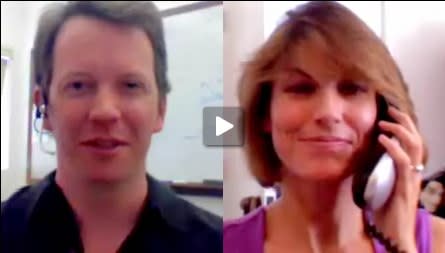 In the latest Science Saturday at Bloggingheads, Jennifer and I zip from the breathtakingly topical -- the Large Hadron Collider, what it's good for, and why you shouldn't be scared of it -- to the profoundly eternal -- calculus, and why people are scared of it. I've finally settled on a proper response to questions about whether the LHC will destroy the world. (After the initial response, I mean.) It comes in two parts. Part One: To an inquisitive person who is asking in good faith, who has heard a bit about disaster scenarios involving black holes swallowing the Earth, and wants to know why we're so sanguine about the possibility of global cataclysm. Sure, we can explain that it's really unlikely you would even make a black hole, and even if you do, that all of physics as we understand it predicts that such a black hole would evaporate away, and that this has been carefully studied. But the better, and punchier, response is simply: there's nothing the LHC will do that the Universe hasn't previously done many times over. This is, of course, the conclusion of the recent paper by Giddings and Mangano. It's long been understood that the energies attained by high-energy cosmic rays are vastly larger than those created by the LHC; the collisions at CERN aren't the most energetic in the universe, they're just the most energetic ones created by human beings, that's all. But the alarmist brigade, desperate for continued relevance, came up with a loophole: what if black holes are created, but ones from cosmic rays simply escape the Earth's gravity, while those created at the LHC sit around and eat us up? What G&M show is that, even if that were possible, cosmic rays bumping into to white dwarfs and neutron stars would have created black holes that did get stuck, and would have eaten them up. But the fact is, we see plenty of white dwarfs and neutron stars in the sky; so that's not a danger. It has nothing to do with any arrogant presumption that we understand physics at high energies, or the evolution of microscopic black holes; it's simply that there is no scenario in which such black holes are created without having other observable effects. (See a nice write-up of this by Michael Peskin in the new APS online review magazine, entitled simply Physics.) Part Two: Experience reveals that, even if you carefully explain why there is no allowed scenario in which black holes swallow the Earth, some stubborn folks will still say "But you can never be perfectly sure! So why take the risk?" For them, it makes sense to switch from science and turn to an analogy. (Experience also reveals that people would rather nitpick at the ways in which the analogy is imprecise, rather than addressing its point; but we soldier on.) So imagine that you go home to cook dinner -- you boil some water, drop in some pasta, and pull a jar of tomato sauce from the fridge. But wait! Are you sure you want to open that jar? After all, if you ask any hyper-careful science-type of person, they will tell you that they can't be absolutely sure that this innocent-looking sauce doesn't actually host a virulent mutated pathogen. It's possible -- not very likely, but possible -- that when you open that jar, a deadly virus will kill you dead, and proceed to eliminate all human life over the course of the next two weeks. What is the chance of this happening? Very, very small. But not strictly, absolutely zero. And, we must admit, the consequences of being wrong are very bad indeed. And frankly, how much enjoyment are you going to get from that jar of tomato sauce, anyway? The only logical and moral choice would be to forgo the sauce entirely, and just enjoy your pasta plain. Except this is nuts, of course. Even if the consequences of an action would be truly cataclysmic, sometimes the chances of it happening are so low that we have to take the risk. Or, more accurately, we choose to take the risk, because science never proves anything beyond any possible doubt, and we can't help but take such improbable risks all the time. Maybe there is a fleet of invisible alien spaceships hovering over head, testing our commitment to unlocking the secrets of the universe, and they will destroy the Earth with their alien death-lasers if we don't turn on the LHC. There's a chance! And that's a chance I don't want to take.