Taking the Measure of Nothing in the Universe 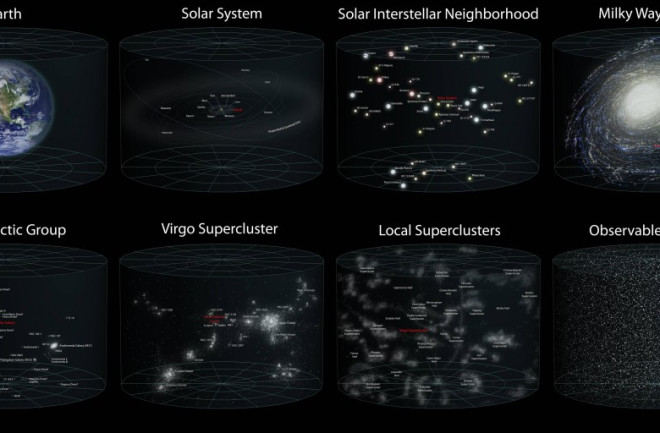 The universe bristles with structure on all scales. But really, it is all just punctuated nothingness. (Image courtesy of Cryhavoc) Lately, I’ve been thinking a lot about nothing. Not just because focusing on nothing is a helpful, meditative antidote to obsessing over the recent barrage of anxiety-inducing news, but also because nothing is the most common thing in nature. After all, the overwhelming majority of the universe is not stars and planets; it is empty space. But empty space is not really truly completely empty. That’s what makes nothing interesting: Some places have a lot more of nothing than others, and even the emptiest places—the ones with the most nothing, you might say—still contain something. In fact, trying to figure out the nature of that something is one of the biggest unsolved issues in science. Sorry. It does all start to sound rather mad after a while. I'll back up and do some some explaining. What started me down this path was a question on the site Quora: “If I went up into space, opened a jar for a few seconds, put the lid on tightly, and then came back down to my kitchen, what would be in the jar?” It’s a great thought experiment. Take a jar-size sample of different parts of the universe. What would you find inside it? To simplify things, let’s make the "jar" a one-liter soda bottle. That’s a familiar standard size, and one that converts easily to other units. It’s 1,000 cubic centimeters, or 1/1,000^th of a cubic meter, or more Pepsi than anyone should drink in one day. Now let’s start to break down the question. What’s inside a one-liter volume of “empty” space? The answer varies enormously depending on where you are. Space around low-Earth orbit is a lot different than space in some random spot between the planets, which is a lot different than the space between galaxies. To come up with a truly universal answer, I'll do the only sensible thing and look at the universe as a whole—that is, the average density of everything we can see. If you average out the entire cosmos, there is a total mass density of 9.9 x 10^-30 grams per cubic centimeter, which is equivalent to 5.9 protons per cubic meter. Note that I was describing mass density, however, not particle density. According to the latest data from the Planck satellite, only 4.8 percent of that density consists of ordinary matter, mostly hydrogen nuclei (protons). On average, then, there is 0.3 atoms per cubic meter of space. Put in more normal terms, if you marked out a random cubic meter of empty universe, there’s a 2 out of 3 chance you would have no atoms in it. Within your one-liter bottle, you have an average of 0.0003 atoms, which is to say that there's about a 2,999 out of 3,000 chance that your bottle is atom-free.

The history of the universe is fundamentally about gravity creating dense patches of matter surrounded by enormous rarefied voids. (Credit: ESA)