Take a Breathtaking Journey to the Sun, Skim its Surface — and Be Amazed! 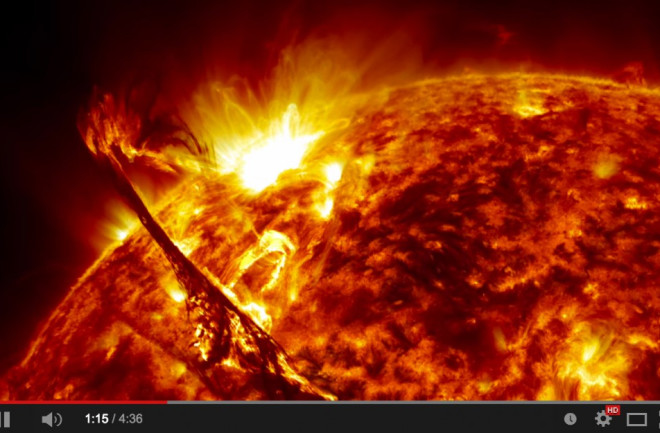 A screenshot from NASA's new video celebrating the Solar Dynamics Observatory's fifth year in space. Click to play it. (Source: NASA/SDO) From Earth, the Sun basically looks like a featureless, burning yellow ball — and one that we obviously shouldn't look at directly. But from its geosynchronous orbit 22,236 miles from Earth, NASA's Solar Dynamics Observatory spacecraft has been doing just that. More specifically, SDO has been capturing a highly detailed image of the Sun more than once a second, building up 2,600 terabytes of data. And now, in celebration of the spacecraft's fifth anniversary in space, NASA has compiled a greatest hits reel. The only word I could utter while watching it was "WOW!" Beyond that, I honestly was speechless. To watch it yourself, click on the image above. The video starts as if you're on a journey to the Sun. As you get close, you seem to skim right above the surface as lacy filaments of solar material dance below you. Then the view changes. You're even closer as the dark silhouette of a planet drifts by. This gives you an idea of the truly gargantuan scale of the Sun. Unimaginably enormous explosions on the Sun's surface fling giants splurts of solar material out into space. Graceful glowing loops of plasma hover within the Sun's atmosphere. And massive sunspots that could swallow several Earth's grow and shrink as you watch. All in all, the video is a tour de force. They should invent an Academy Award category for it. So drop what you're doing and watch. And make sure to crank up the sound, because the video comes with a cool soundtrack.