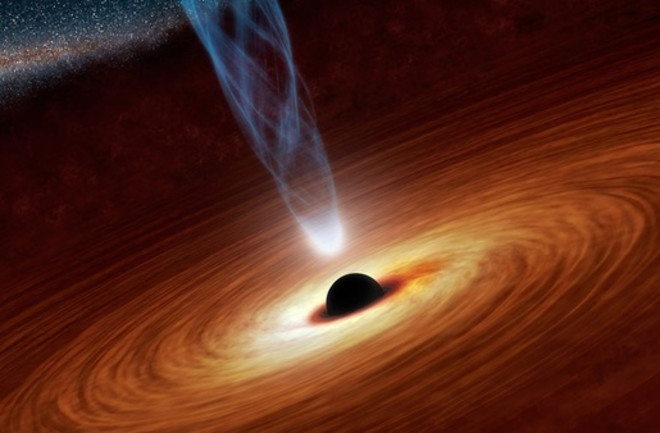 (Credit: NASA-JPL / Caltech) Black holes aren’t perfectly black. For the first time, using a model of a black hole that traps sound instead of light, scientists have seen spontaneous evidence of what comes out of them. These particles are so few and faint that it’s not feasible to observe them for an astrophysical black hole, so Jeff Steinhauer at Technion–Israel Institute of Technology made a tabletop version of a black hole that sucks in sound instead of light. Using this, he’s the first to see evidence for particles that escape a black hole, called Hawking radiation. In 2014, using the same tabletop black hole equipment, Steinhaeur saw an induced form of Hawking radiation, in which something hit the black hole’s event horizon to cause the Hawking radiation. But this is the first time anyone has seen spontaneous Hawking radiation. Steinhauer published the results in Nature Physics Monday. Hawking radiation is named for Stephen Hawking, who in 1974 theorized its existence, calculating that black holes shouldn’t suck in absolutely everything. A few lucky particles should be able to escape. This is because, according to quantum theory, pairs of particles spontaneously come into being all over the universe: a particle and its antimatter counterpart. Normally, they obliterate each other, but if they happen to pop into being in exactly the right place, one will be sucked into a black hole and the other will escape it. Steinhaeur’s tabletop black hole is made of a very thin cylinder of liquid confined in the space of a laser beam. Because the liquid is flowing faster than the speed of sound, no sound waves should be able to escape, except for Hawking radiation. Here, the Hawking radiation consists of pairs of sound waves, one falling into the black hole, and the other coming out. Hawking’s calculations also show that the particles should be quantum entangled with each other, and Steinhaeur’s experiment showed evidence that they are. He collected observations of many pairs of Hawking particles, and for each pair, the particles had exactly the same energy value, except that one was positive and the other was negative. When he graphed the particles’ energies, “I knew it must be entangled just as soon as I saw it,” he says. Steinhauer says his goal is “to learn as much as we can about real black holes,” but that’s not the ultimate purpose. “People are not trying to understand the black hole,” he says; “they’re trying to understand the laws of physics more.” No one has yet reconciled our understanding of gravity with the fundamental uncertainty and randomness of quantum mechanics. “We understand gravity on a classical level,” Steinhaeur says. “But we’d like to understand it more deeply, understand the randomness of gravity... In this search for the laws of quantum gravity, Hawking’s radiation is considered an important first step.” To this end, Steinhauer has worked on the sonic black hole model for seven years straight. “I’ve been working on this continually since 2009. Only this, all day, every day.” To gather the data for this most recent study, he had to repeat the experiment 4,600 times, the equivalent of 6 continuous days of measurements. When asked how he celebrated the first ever observation of spontaneous Hawking radiation, Steinhauer said, “I quickly wrote a paper—that’s a form of celebration.”