System of Super-Earths Discovered Around A Nearby Star 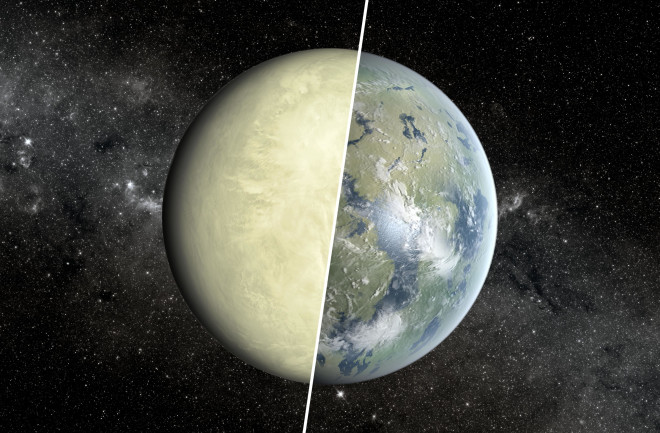 Astronomers still don't know what life might be like -- or if it could exist -- on planets near twice the size of our own. Would these worlds be toxic wastelands or ocean oases?(NASA/JPL-Caltech/Ames) If you look up at Earth’s night sky and find the constellation Cetus — it looks something like a sea monster — you might also notice a rather average looking star called Tau Ceti. It’s slightly smaller than our sun and sits just 12 light years from Earth. Now, a new study suggests that the system has at least four planets, and two of them orbit on the edge of their habitable zones — the region where liquid surface water might exist. All four are likely super-Earths, and some could potentially even be as big as Neptune.

The new paper, accepted for publication in the Astronomical Journal, compiles more than 9,000 measurements, finding two new planets and confirming two others from previous observations. Tau Ceti’s proximity to Earth has made it a prime target for planet hunters since 1988. But the system isn’t easy to study. There’s a vast amount of dust, and astronomers haven’t seen any planets pass in front of Tau Ceti, producing a telltale dip in light called a transit. So researchers have instead relied on the radial velocity method, which can reveal minute wobbles as planets pull on their host star. In the past, astronomers have claimed to find super-Earths and even mini-Neptunes in the Tau Ceti system. The Astronomical Journal study published this week built on 14 years of data to better map out Tau Ceti’s planets, discerning what's real and what's noise. The four planets they found orbit Tau Ceti in 20, 49, 160, and 642 day orbits. All four are super-Earths, with the inner two (Tau Cetis g and h) at least roughly twice as massive as Earth. The outer two are both some four times bigger than Earth. Fabo Feng, a research fellow at the University of Hertfordshire and lead author on the study, says that Tau Ceti is a tempting target because it’s more like our sun than other nearby stars, like Proxima Centauri — Earth’s nearest star. Last year, scientists made global headlines when they discovered Proxima b, an Earth-sized planet. But Proxima Centauri is a red dwarf star, which are prone to extreme flares that might extinguish life. Tau Ceti might be more stable. “If the planets are confirmed to be habitable, Tau Ceti may also be a target for manned interstellar travel, as seen in science fiction,” Feng says. (Indeed, the Kobayashi Maru test in Star Trek II: The Wrath of Khan took place at Tau Ceti.)

The two new planets orbit in 20 and 49 days, respectively, while the others they confirmed are at 160- and 642-day orbits. Previous studies have also suggested planets at 14-, 35-, and 94-day orbits. This could mean that Tau Ceti has seven or more planets. The astronomers even spotted a potential planet in a 1,000 day orbit, but the signal was confusing and couldn’t be confirmed or rejected. "Still, it may yet prove to be real," UC Santa Cruz astronomer Steve Vogt, a coauthor on the study, says of that particular world. "We have certainly not ruled it out here. We merely point out its appearance, and give all appropriate caveats about its reality." However, the study also couldn’t detect the previously announced 14-day planet or the 35-day one, and found only weak evidence for the 94 day signal. Scientists say one of those previously suspected planets might have been caused by activity from the star itself. “There are weak signals corresponding to these three signals,” Feng says. “But they either vary with time or are not significant (enough) to be confirmed as planet candidates. So we only report four planets.” There’s also the issue of habitability. The 160-day planet is at the inner edge of the habitable zone — like Venus — while the 642-day planet is at the outer edge and could be a cold, Mars-temperature zone planet. And since the system is jam packed with debris, space rocks likely strike the planets 10 times more often than Earth gets hit. We’re thus left with a puzzle of a system. There’s one world that might be too hot, another that might be too cold, but both could somehow be both just right if their orbit is slightly eccentric. And those planets are likely rocky, but might not be, and if they are, may experience daily violent impacts. There are at least four but maybe seven planets there, or six and a solar storm. There may be others lurking somewhere, including ones closer to Earth in size. There’s a world of possibilities in these worlds — if we can just sort through the mess of conflicting data first.