Note: due to the holidays and other personal reasons, this may be my last blog entry until next week. I'll post more if I can, but no promises. 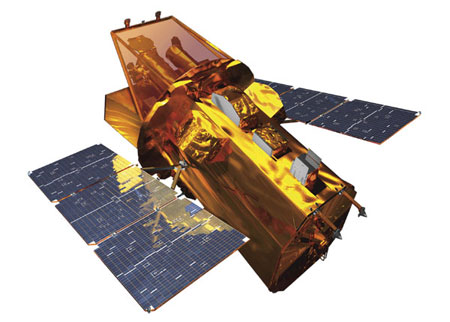 One year ago Sunday, the Swift satellite roared to orbit on top of an Delta rocket. Over the next few weeks, scientists and engineers gingerly activated the complex equipment onboard Swift that would allow it to fulfill its mission: to detect and observe gamma-ray bursts, flashes of high-energy light which appear to signal the births of black holes. These bursts were one of the leading mysteries in astronomy for the past few decades. They would last as long as a few minutes, or as short as a few milliseconds. They would flash out their gamma rays, and sometimes -- rarely --- leave an afterglow in visible light. Gamma rays are notoriously difficult to trace; the best anyone could do was tell you kinda sorta where the gamma rays had come from, but it was difficult to get a good location for them on the sky. Without that, it was impossible to know what caused the bursts. This was a real problem! It was difficult to imagine what could be causing these odd bursts. It was known they were happening very far away, billions of light years away. Earlier satellites had determined that. But the energetics of the explosions are truly awesome. They release as much energy in a few seconds as the Sun will over its entire lifetime. More. But what physics lies at their heart? What could cause such vast explosions? Swift, it was hoped, would solve that problem. It had the best hardware ever made for locating gamma-ray bursts. Once it pinned down the location looking at gamma rays, it would rapidly -- hence its name -- point its X-ray and Ultraviolet/Optical Telescopes at it, and nail the location very precisely. The coordinates were then to be beamed to the ground so that telescopes on Earth could follow-up. When Swift launched, we had a lot of hopes riding along with it, hopes that this maddening mystery of GRBs would finally be cracked. That was a year (and a day) ago now, and Swift has performed beautifully. It has seen dozens of bursts (roughly two per week, on average) and seen afterglows on quite a few. It has seen the most distant burst detected at a whopping 12.8 billion light years away. It has seen short and long bursts, bursts near and far, faint and bright (it caught a burst just last week that may have had the second brightest afterglow ever seen). The list goes on and on. You can even keep up with the latest bursts seen by Swift (and other satellites) on a website that updates this information in real-time: http://grb.sonoma.edu. Swift has done so well that Popular Science magazine chose it as the Best of What's New 2005, an award it richly deserves. Swift is one of several satellites that provide funding to my group at Sonoma State University, and I'm proud to be able to talk about it in schools, at teacher conferences, in magazines, and of course on my blog. Swift has at least one more year in its mission, unless NASA decides to extend its mission longer. I think that's a pretty good bet. Happy anniversary, Swift.