Swarm of Tremors in New Zealand Means Magma May Be Stirring 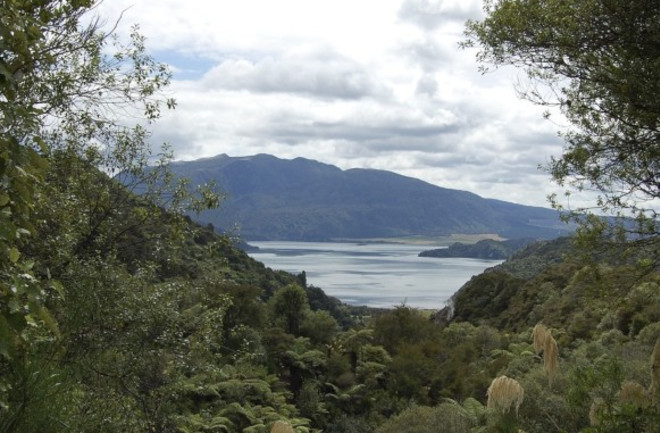 The Waimangu Geothermal Valley, with Lake Tarawera and Tarawera itself in the background.

Over the weekend, a small earthquake swarm hit in the Okataina Caldera Complex on the north island of New Zealand. The swarm itself only lasted a few hours and generated a few dozen earthquakes, all less than magnitude 3. The swarm was located directly underneath the Waimangu Geothermal Valley, the chain of hot springs, mudpots and geysers left by the 1886 eruption of Tarawera---the last eruption from the Okataina Caldera Complex. That 1886 eruption was an impressive event, creating one of the few, recent basaltic plinian eruptions that spread dark ash all the way into the Bay of Plenty. The Waimangu Valley itself is amazing, even if the world's largest geyser no longer erupts along its length. Now, why would I bring up a small earthquake swarm in a volcanically active area? Mostly to show how rumbling like this is to be expected anywhere that has recent (and repeated) volcanism. The Okataina Caldera Complex has a multitude of eruptions over the last few thousand years, including the two that I've studied: the Kaharoa (~1300 AD) and Whakatane (5600 years ago). Most of the eruptions since 1886 have been steam-driven explosions that, as we've seen in the past, have little-to-no precursor. However, there is no doubt magma still underneath this area of the Okataina. The current earthquake swarm (which is already over) was located ~5-7 kilometers below the surface, which is likely the depth of the rhyolite magma body that fed the Kaharoa eruption.

Earthquakes over the last 3 months in the Okataina region of New Zealand. The Tarawera vent alignment for volcanoes is marked along with the approximate boundary of the Okataina Caldera Complex. Red circles are locations of earthquakes. Click on the image to see a larger version. GNS Science, modified by Erik Klemetti So, [SPECULATION] these earthquakes could be related to magma movement within this body of rhyolite, whether it be recharging or reorganizing since the 1886 basaltic eruption blasted through it. If you look at a map of earthquakes in the area (see above), there is an alignment of earthquakes (and volcanoes) that likely represents a preferred pathway for magma to ruse from the mantle under Okataina. So, it makes sense that if magma is percolating up into the cooling crystal mush, the earthquakes associated with that would be along that trend. [/SPECULATION]. In any case, earthquake swarms like this are a reminder that although it has been quiet for an anthropologically long time (127 years), for the volcano, the last eruption was just yesterday (and the next one is around the corner). You can watch the GNS Science webicorder for Okataina to see if the swarm returns. Even with this small swarm, the alert status at Okataina has not been raised above Green/0 (the lowest).