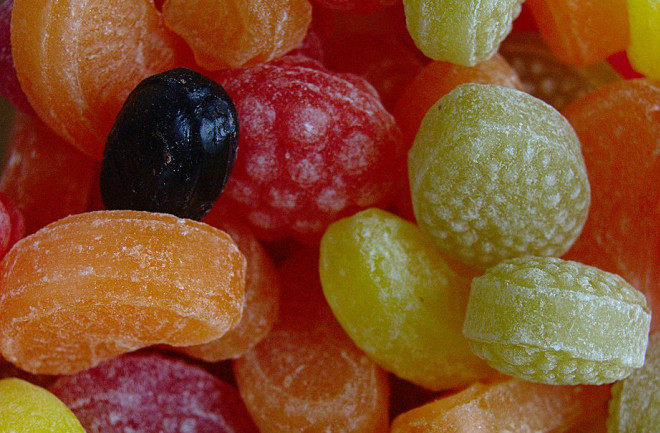 Old-fashioned candy-making is a fascinating spectacle, if one ever gets the opportunity to watch. Fortunately, the Internet is full of videos like this one, which shows how hard candies (specifically, candy canes) are made by hand:

The process that turns ordinary, granulated table sugar into solid, glassy, hard candy is as dynamic on a molecular level as it is captivating to watch on an observable scale.

As a dry ingredient, table sugar comprises granules of sucrose crystals. Transforming these granules into a solid piece of candy begins by dissolving sugar—lots of sugar—in water. When stirred into water, the granules break apart into individual sucrose molecules. Hard candy recipes typically call for 2.5–4 parts sugar in 1 part water. However, sucrose has a solubility of only 2000 g/L, which is roughly 2 cups sugar in 1 cup room temperature water [1]. This is easily remedied by turning up the heat; sucrose solubility increases with temperature, meaning much more sugar can be dissolved in hot water compared to cold or room temperature water.

Boiling a mixture of sugar and water does more than simply allow larger volumes of sucrose to dissolve in water. As the temperature of the sugar solution rises, water evaporates and leaves behind the sugar in its molten form. This creates a very concentrated sugar solution. Different sugar concentrations correspond to different types of candies (Table 1). In the case of hard candy, confectioners and professional candy-makers typically bring the boiling sugar solution to about 150°C (302°F) before removing it from the heat.

In broad terms, candies are categorized as crystalline or non-crystalline. Crystalline candies, such as fondants, fudges, and marshmallows, are soft, pliable, and creamy thanks to their sucrose crystal structures. Conversely, non-crystalline candies are firmer and include toffees, caramel candies, brittles, and hard candies. Unwanted crystals in these candies create a grainy, even gritty, candy texture. Hindering the crystallization process is crucial for making a successful batch of hard candies.

This is where corn syrup, another key candy ingredient, plays an important role. Corn syrup consists primarily of starch, which is nothing more than a string of sugar (glucose) molecules linked together. When heated, the starch breaks apart into its glucose components. These glucose molecules are smaller than sucrose and can impair crystallization by coming between the sucrose molecules, ultimately interfering with crystal formation [2]. In some recipes, invert sugar or honey may be added in lieu of corn syrup. Invert sugar and honey are both mixtures of glucose and fructose, which impede sucrose crystallization the same way as corn syrup.

During the final stages of candy-making, the sugar solution is poured onto a cooling table. As it cools, it takes on a more solid, plastic-like mass that is still very pliable. Flavors and dyes are added at this stage. Sometimes an acid, such as citric acid, is also added. These acids further prevent sucrose crystallization by hydrolyzing sucrose molecules into their basic components: glucose and fructose. The sugary mass is then aerated, often by rolling, pulling, or folding, so that it cools down quickly and becomes more solid. This is the creative stage in which the candy-maker kneads, rolls, molds, and cuts the candy into its final shape.

Hard candy is ready to eat once it cools down to and hardens at room temperature. At its completed stage, hard candy is similar to glass: it’s an amorphous solid that is shiny, rigid yet fragile, and sometimes transparent.

Who knew such simple, little candies could be so complex?