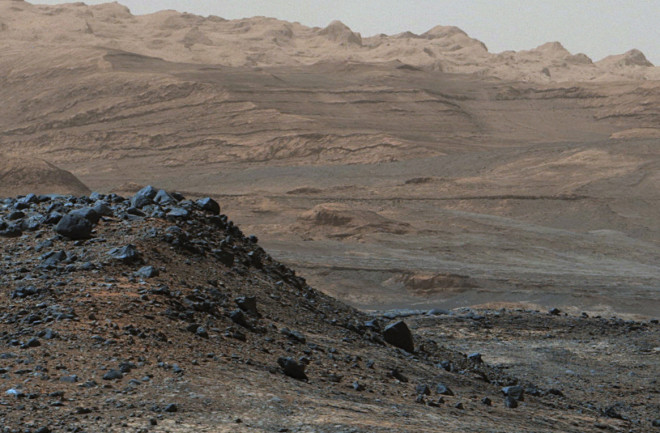 The view from Mount Sharp on Mars, as seen by the Curiosity rover on April 10, 2015. (Source: NASA/JPL-Caltech/MSSS) The redrock canyons and up-tilted strata of eastern Utah form some of my favorite landscapes on Earth. So when I saw the scene visible in the image above it really stopped me dead in my tracks.

Source: NASA/JPL-Caltech/Univ. of Arizona Luckily, it didn't do the same for the Curiosity rover on Mars, which has been slowly climbing the Red Planet's Mount Sharp and sent this spectacular view of the surrounding landscape back to Earth in early April. What really strikes me about this image, and the ones to follow, is just how familiar it looks. The jagged skyline in the distance is part of the higher elevations of Mount Sharp. For a map showing the rover's route through this landscape, click on the thumbnail at right. (And for an explanation of the notations on the map, click here.) The image at the top of this post is actually a relatively small crop from a sweeping panorama that combines 33 telephoto images into one Martian vista. Here's the entire panorama:

A panorama of 33 telephoto images acquired by the Curiosity rover combined into one Martian vista. (Source: NASA/JPL-Caltech/MSSS) Consider opening the image in a new tab or window so that you can zoom in and pan around for an astonishingly detailed view. When you do, look for the scale bars that NASA has included. They can give you a sense of the size of things in this landscape. Here's another crop from that broad panorama:

The view from the lower slopes of Mount Sharp on Mars, as seen by the Curiosity rover on April 10, 2015. (Source: NASA/JPL-Caltech/MSSS) Once again, consider opening the image in a new tab or window, zooming in and panning around. See if you can spot a boulder in the foreground with fairly clear sedimentary layering. Next, shift over to the cliff at upper right. At about 10 feet high, it's an exposure of pale mudstone within Mount Sharp's basal geological unit, the Murray formation. And here's one final view:

Another crop from the broad panorama captured by the Curiosity rover on April 10, 2015. (Source: NASA/JPL-Caltech/MSSS) I've included a 2-meter scale bar on this one. As with the other images, I'm struck by how familiar this landscape looks. True, there is no visible life here. In Utah, there would some grasses, maybe some juniper and pinyon pine, and fragile biological soil crusts. But I'm sure some parts of the Sahara and other desert areas here on Earth look just like this. The rover's mission on its slow drive up Mount Sharp is to study rock layers for clues of how environmental conditions — and the potential to support microbial life — changed during the Red Planet's early history. Here's NASA's summary of the mission so far:

Curiosity has been exploring on Mars since 2012. It reached the base of Mount Sharp last year after fruitfully investigating outcrops closer to its landing site and then trekking to the mountain. The main mission objective now is to examine successively higher layers of Mount Sharp. Curiosity spent several months examining the lowest levels of the mountain's basal geological unit, the Murray formation, at an outcrop called "Pahrump Hills." Then it set off toward a site called "Logan Pass," where the team anticipates a first chance to place the contact-science instruments at the end of the rover's arm onto a darker geological unit overlying or within the Murray formation.

After working with these images, I find myself really wanting to explore the surface of Mars in person. I guess I'll have to settle for Utah — which will suit me just fine!