Study: We Watched the Crap Out of That Eclipse 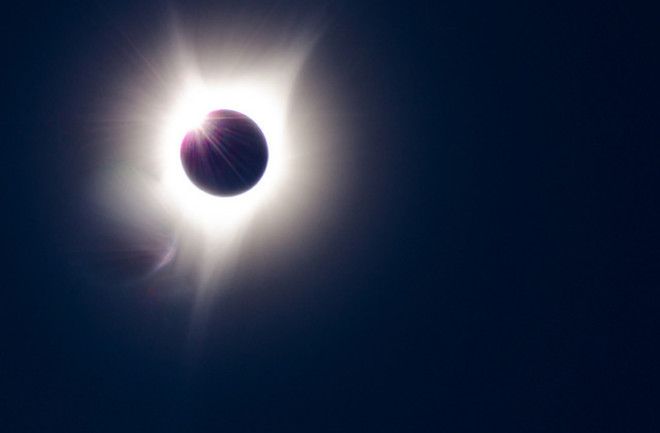 The total solar eclipse as seen from McMinnville, Oregon. (Credit: Bud Ellison/Flickr) As you may recall, we had a solar eclipse last month. It was kind of a big deal. After almost 40 years without a total solar eclipse, the United States got pretty lucky on Aug. 21, with the moon’s shadow crisscrossing the country and at least a partial eclipse visible in all 50 states. About 12 million people lived within that “path of totality,” and 47 million were within 100 miles. But how many actually turned out to see it? Thanks to a new study from the University of Michigan we have the numbers, and they’re, uh, astronomical: Looks like some 215 million adults checked out the eclipse. That’s huge! It’s 88 percent of the adult population! It’s almost twice the size of recent Super Bowl audiences! As The New York Timespoints out, it’s also almost 30 percent more than the turnout for last year’s presidential election, 18 times larger than the viewership of the “Game of Thrones” finale and more people than brush their teeth daily. Should I go on? Now, one caveat: That number represents the total number of viewers, which includes in-person and digital observers, so it’s not like 215 million people saw the moon block out the sun in person. But 154 million did, according to the survey, and about 20 million adults traveled to get a better view. Still not too shabby. The eclipse also became a viral hit, with one in three viewers taking pictures or a video, and half of those getting shared via social media and email. The study, which was conducted under a cooperative agreement with NASA, was just the beginning, as follow-up surveys in the coming months will determine if seeing the eclipse actually motivated anyone to go out and learn more about astronomy. (I won’t be holding my breath.) On one hand, it shouldn’t be shocking that a truly spectacular event, right in our own backyard, should be so well attended. But in these divisive times, seeing just how many Americans came together to enjoy an astronomical event, of all things, is a nice reminder that ultimately we all might have more in common than we think. Be sure to practice your rendition of “Kumbaya” for the next eclipse in the U.S., in 2024.