Study shows that you can run on water...on the moon. 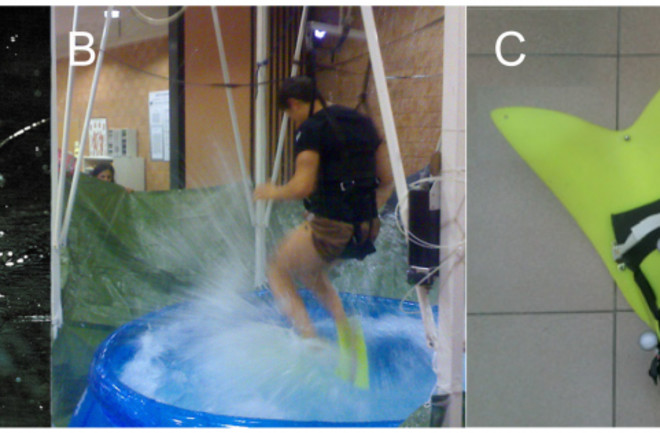 Figure 1. Running on water in Basilisk lizard (A, Basiliscus basiliscus), and human in our laboratory conditions (B). The fins used are illustrated in C.These three Italian scientists deserve a prize for the most superhero-inspired experiment: they first used mathematical modeling to predict that humans would be able to walk on water in reduced gravity, and then they actually tested it with special flipper shoes and a kiddie pool! As they note in their introduction, "Notwithstanding various internet hoaxes, humans are apparently incapable of walking or running on water." (Never have I wished so much for a citation as at the end of that sentence... please amend this oversight in the comments!) And boy, do I wish my Ph.D. dissertation was half as fun as the experiments in the video below. Seriously--if you need someone to go on a lunar mission to splash across a kiddie pool in order to test this hypothesis more rigorously, sign me up!Humans Running in Place on Water at Simulated Reduced Gravity. "Background: On Earth only a few legged species, such as water strider insects, some aquatic birds and lizards, can run on water. For most other species, including humans, this is precluded by body size and proportions, lack of appropriate appendages, and limited muscle power. However, if gravity is reduced to less than Earth’s gravity, running on water should require less muscle power. Here we use a hydrodynamic model to predict the gravity levels at which humans should be able to run on water. We test these predictions in the laboratory using a reduced gravity simulator. Methodology/Principal Findings: We adapted a model equation, previously used by Glasheen and McMahon to explain the dynamics of Basilisk lizard, to predict the body mass, stride frequency and gravity necessary for a person to run on water. Progressive body-weight unloading of a person running in place on a wading pool confirmed the theoretical predictions that a person could run on water, at lunar (or lower) gravity levels using relatively small rigid fins. Three-dimensional motion capture of reflective markers on major joint centers showed that humans, similarly to the Basilisk Lizard and to the Western Grebe, keep the head-trunk segment at a nearly constant height, despite the high stride frequency and the intensive locomotor effort. Trunk stabilization at a nearly constant height differentiates running on water from other, more usual human gaits. Conclusions/Significance: The results showed that a hydrodynamic model of lizards running on water can also be applied to humans, despite the enormous difference in body size and morphology." Related content: NCBI ROFL: Bats eavesdrop on the sound of copulating flies. NCBI ROFL: Scientific proof that milk is better on cereal than water. NCBI ROFL: Horrified hot tub is horrified.