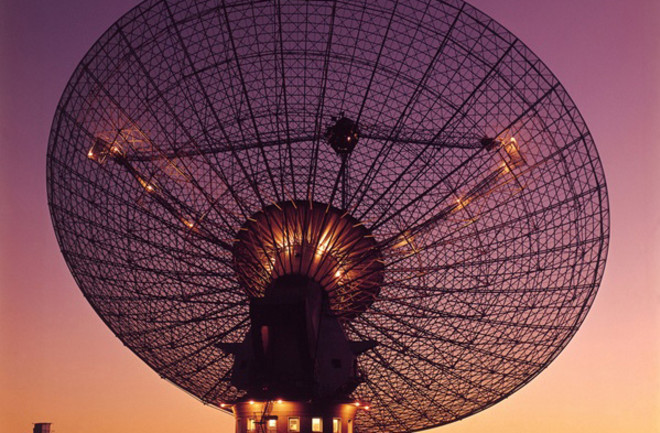 The Parkes radio telescope “heard” the first fast radio burst in 2001. Could bursts actually be going off every second? (Credit: CSIRO) Fast radio bursts (FRBs) are one of the hottest topics in astronomy right now. These short but extremely powerful bursts last only milliseconds, but release tremendous amounts of energy during that minute period of time. Since publication of their initial discovery in 2007 (the burst itself occurred in 2001), just over 25 of these sources have been identified, with only one repeater. But now, Harvard-Smithsonian Center for Astrophysics astronomers have estimated that despite only the handful of FRBs in our current records, such events could be occurring as often as once per second. Anastasia Fialkov and Avi Loeb published their findings September 10 in The Astrophysical Journal Letters. The title says it all: “A Fast Radio Burst Occurs Every Second throughout the Observable Universe.” Their work is based on observations of the single repeating fast radio burst FRB 121102, which has been traced back to a galaxy 3 billion light-years away. Because 121102 repeats, astronomers have been able to obtain information about it in greater detail than other events. And if that FRB is actually exhibiting normal behavior for these sources, then Fialkov and Loeb estimate that “in the time it takes you to drink a cup of coffee, hundreds of FRBs may have gone off somewhere in the Universe,” according to Loeb in a press release. What does this really mean? “If we can study even a fraction of those well enough, we should be able to unravel their origin,” he said. That origin is still unknown, though most astronomers believe FRBs are associated with magnetars, a class of neutron star with extremely strong magnetic fields. Young magnetars may have the strongest fields and spin the fastest, releasing energy erratically that we see as an FRB. Although no other FRBs have been caught repeating, it doesn't mean they aren’t — simply that we haven’t spotted them doing it. Despite the fact that FRB 121102 has repeated several times, there is no discernible pattern or period. Thus, it could in fact represent normal FRB behavior, or FRB behavior at a certain point in the source’s life cycle. Furthermore, the authors emphasized that FRBs don’t need to be understood to serve as valuable tools for learning more about the universe around us. Because FRBs are so strong, they can travel vast distances to reveal details about the distant — young — universe. Their signals carry relics of the materials (including matter, antimatter, and dark matter) they encounter on the way to Earth, which could help us better resolve the structure of the cosmos. The most distant FRBs could even help astronomers determine more accurately when a period in cosmic history called “reionization” occurred, some hundred million to one billion years after the Big Bang. Prior to reionization, the universe was filled with neutral hydrogen. As the first stars formed, they emitted ultraviolet photons that spread through the universe, ionizing the hydrogen and “clearing the fog” it created. FRBs could be part of the key to unlocking exactly when and how this occurred, if their signals can be detected from places and times when this process was taking place. “FRBs are like incredibly powerful flashlights that we think can penetrate this fog and be seen over vast distances,” explained Fialkov. “This could allow us to study the ‘dawn’ of the universe in a new way.” And with potentially tens or hundreds of those FRBs going off every minute, the number we can study skyrockets, helping astronomers paint an ever-clearer picture of our universe and its history.